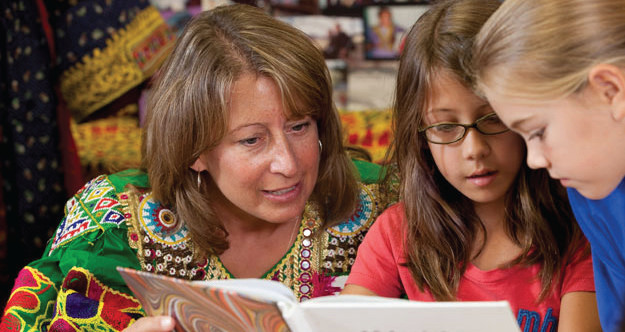 Khris Nedam, Director of Kids 4 Afghan Kids gave an engaging and lively talk to students, faculty and members of the Sarasota community in the Harry Sudakoff Center on April 7 as part of an ongoing lecture series by Sarasota World Affairs Council (SWAC).

Nedam is a teacher who has lived and worked in Afghanistan and was an employee of the Embassy of Afghanistan in Washington D.C.

After Nedam was blacklisted by the Taliban, she left Afghanistan and began teaching elementary school classes in Northville, Michigan. A representative from Afghanistan and friend of Nedam gave a talk to her students in 1998 about what life was like for kids their age in Afghanistan at that time.

The young and enthusiastic Michigan students wanted to do something to improve the conditions of the children in Afghanistan and, with Nedan, founded Kids 4 Afghan Kids, non-profit organization with the goal of educating and addressing health conditions for Afghani children and their families.

Kids 4 Afghan Kids has since built a thriving school in a small village outside of Cobble.

The village elders donated all the land and labor while funding and support was provided by Kids 4 Afghan Kids by fundraising in the United States. Other countries have also kicked in support for the program.

“The other thing that was really important to my students was that the girls got to go to school,” Nedam said. Before attending the school none of the girls could read. “This was during the Taliban time and we registered the school with the Taliban government. We got permission for girls to go to school as long as they went at a separate time from the boys.” Boys simply went in the morning and girls went in the afternoon.

Along with the original schoolhouse they built a clinic to vaccinate students. The men and boys built the schoolhouse by hand and soon were planting fruit trees and gardens in the area to supplement the nutrition of the students, many of whom were malnourished.

The facility now has a separate high school for girls and boys and a boy’s orphanage among other buildings on the property.

Despite war and instability in the country over the last decade, the program has been very successful and now has 1,200 students, 600 girls and 600 boys.

The next lecture sponsored by SWAC will be on May 1. The Counselor General Of

SWAC offers civic education to the Sarasota community in international affairs through the lecture series, a volunteer seminar discussion group known as Great Decisions and a peer mediation program with college students. The peer mediation group has college students work with high school students to engage young people in how to resolve their conflicts through peaceful and nonviolent means.

The SWAC is a newly formed Sarasota chapter of a national group with more than 100 chapters across the United States. Nat Colletta, adjunct professor of international studies and former World Bank official, is founding president of SWAC.