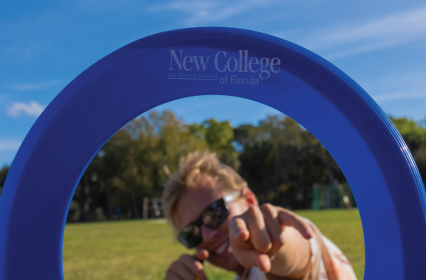 On Sunday, Feb. 23, students gathered in “Rural America,” the greens around the softball field, for a wholesome day of fun, sun and family-friendly recreation.

“I have a vision for this Sunday afternoon at around 1 pm,” second-year Eliot Greene wrote on the forum the Wednesday prior. “Tons of people chilling in Rural America. Everyone can put towels, blankets, and chairs down. We can all bring speakers and mingle. Let’s take advantage of a sunny day and create some good vibes. Everyone is welcome so let’s have a great time.”

The thread was bumped more times than a friend group walking horizontally across the overpass, so Greene and his second-year associate Dominic Grijalva set to work making promotional material in the form of flyers beseeching the reader to “make new friends,” “Bring: a smile” in Comic Sans and getting the word out by asking Hamilton Center employees to tell students about the event.

Their hard work paid off as Sunday Social drew a crowd of at least 35 students, far more than most events the RAs and SA[u]CE office attempt to lure students to with free food and giant speakers playing Rhianna outside Hamilton Center.

“I’m super pumped about everyone coming out and enjoying the sunshine together, especially on a weekend where we’re celebrating alums and just the New College community in general,” third-year Megan Ballard gushed, still sudsy from her trip down the Slip ‘N Slide.

It was truly a momentous weekend. Armed with only a brand-new kickball and his suntanned Salt Life charm, Greene accomplished something one would think only a full SWAT team, or possibly a pop-up Panic! at the Disco concert might be capable of: getting New College students to go outside. The revelers may have appeared a little disoriented initially, squinting like pale newborn moles in the non-fluorescent light of day, but soon relaxed in their colony of colorful blankets only a marginally awkward distance away from each other.

There was volleyball, football, the aforementioned Slip ‘N Slide, guitars aplenty, plus one mandolin courtesy of second-year Saeed Elhajoui, who also brought delicious lentils to share and Go, a Chinese abstract strategy board game. A variety of speakers played absolutely anything from The Strokes to radio Reggaeton, true to Greene’s vision—just good vibes all around.

“I feel like I know people here, but I don’t really hang out with people here, so I think it’s a really cool thing to bring people together who have no connection to each other, just to hang out in a field and enjoy a sunny day together,” Greene said on a break from his volleyball game. “I always complain that nothing happens on campus, so this is being the change I wanna see. Eventually, I want it to become an unspoken thing—like on nice sunny days, we’ll just come and hang out.”

While many lament the extinction of New College traditions, Greene rolled up the sleeves of his pineapple-print button down and set to work creating new ones. He might think the New College community is deficient in both good vibes and vitamin D, but Greene knows he is the man for the job. He has already planned another weekend social for the Saturday post-PCP.