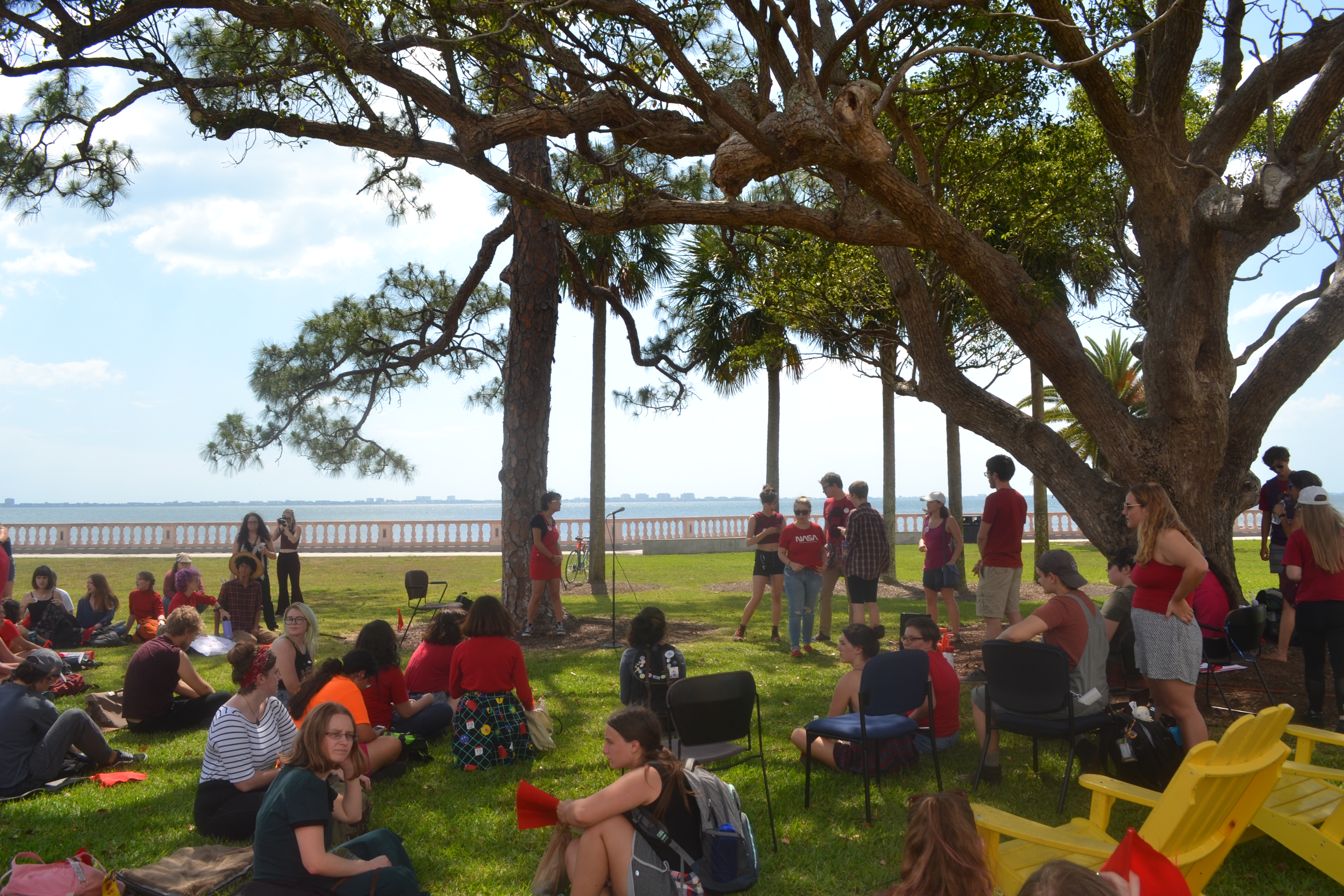 Michala Head/Catalyst Students gathered at the Bayfront to protest and discuss the recent allegations.

In response to allegations that Dean of Enrollment and Financial Aid Joy Hamm was red-flagging applications that mentioned mental illness or physical disabilities, students gathered for a peaceful protest on May 1. Donning red apparel, representative of the red flags, about 100 students gathered outside of the ACE building and prepared to protest. Hand-drawn pins reading “fuck red flags” were distributed, a chain link made of red construction paper—each loop representative of a student who considered themselves to be a “red flag”—was carried and food and water were set up for the group at the march destination.

In anticipation of this demonstration, a handful of students had met two nights prior to update existing demands and set new ones. According to an Apr. 29 Sarasota Herald-Tribune article, New College administration agreed to meet initial student demands presented after the allegations first emerged the previous week.

The following updated demands were floated to the group to be voted on with a show of hands before everyone set off for the Bayfront: put Hamm on unpaid leave during external investigation, develop transparent admissions criteria with New College Student Alliance (NCSA) input, hire at least two more staff members for Student Disabilities Services including an independent officiant for the NCSA, ensure reasonable paperwork for accommodations and expand the amount of appointments students can take at the Counseling and Wellness Center (CWC) from 40 to 80.

“We must keep communicating to [the administration] that these are problems that must be addressed,” first-year student Jamie Christos said in an email sent to the Forum. “Also, it’s important to remember that this is an institutional problem, so Joy Hamm isn’t the only one responsible for this policy. We’re working for structural change here.”

The protest reflected the extensive need for improved accessibility on campus. Following the march to the Bay, everyone sat to listen to students’ personal stories of difficulty navigating campus with a disability. According to organizer and Catalyst staff writer, Anna-Lynn Winfrey, 36 people came forward. With a request for permission, followed by a group show of hands to decide whether to grant it, President Donal O’Shea and Provost Barbara Feldman came out, sat and listened.

The fallout from the recent allegations has been felt daily on campus and beyond. Students attended Division meetings to discuss recent developments with their professors.

“I knew that faculty wanted to hear from us, and I knew that we wanted to hear from them, but what I did not expect was their readiness to help us hold administration accountable,” thesis student Grace Harrison said in an email interview. “It became clear to me at that meeting that this can be a united front if our student organizers keep showing up.”

Former student admissions workers Eugenia Quintanilla (‘14) and Maria Simmerling (‘14) first filed a complaint over Hamm’s alleged patterns of discrimination, but were not the only alumni to get involved in these recent developments. Mischa Patteson (‘14) reacted by making the Facebook profile picture filter reading “I am not true blue, I am a red flag” for students and alumni to use to express the personal toll that New College’s ongoing inaction has taken on them. The phrase was repurposed as a chant during the protest.

“It is powerful to see the stories of so many people who may have missed out on a quality education if they’d been subjected to a red-flag policy,” Patteson said in an email interview, on responses to the filter. “This scandal sparked unanimity in our community like I’ve never seen and didn’t think was possible. There’s been a lot of really beautiful community support, and I’m just talking about online.”