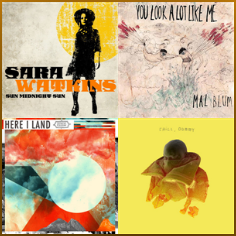 This edition of SYSH aims to wind you down in the midst of the various stresses midterms imposes.

Spring Break is rapidly approaching, and with it, many of us find ourselves in a limbo of too much and not enough—of either wrapping up midterms or only just starting them. Of a vacation come just in time, full of travel and time spent with friends, or of a retreat back home in order to rest and recuperate. It’s a dizzying time to be alive, on the bleeding edge of history, and sometimes you just need a moment to remember where you stand among it all.

This edition of Songs You Should Hear aims to provide some catharsis—to guide you through those perilous highs and lows and ultimately deliver you somewhere where you might ground yourself and feel gracious for the present you occupy, if only for a moment.

Stevenson embodies a sort of moody introspection in this track that all other up-and-coming indie boy wonders of 2014 could only dream of capturing. Here I Land from Stevenson’s first EP of the same name weaves a narrative of flight and the fragile desire for safety, bordered by what starts as the minimalist strumming of an acoustic guitar that later launches into a full band—electric guitar, drums, tambourine, distant floaty harmonies layered in—the works. Here I Land makes use of its pauses, the spaces in between words and notes when everything is quiet before everything crescendos again. The stilted beginning is much like a grounded bird, tottering on uneven legs before being swept away into the air and soaring off with the chorus: “All the time I will wait for dark to shape my escape. Getting by, who knew? We could fly this low, without a scrape.”

Mal Blum’s voice has a very specific quality that can be difficult to pinpoint in other, more mainstream artists, but is evident in “Robert Frost,” the third track of their 2015 album You Look A Lot Like Me. Blum’s songs often cover uncomfortable and emotionally messy topics, and they tend to either prioritize a dry, witty delivery in order to offset the tragedy of the song’s subject matter, or they lean into it fully, their voice taking on an untrained, raw quality that prioritizes the gut feelings the song invokes above all else. “Robert Frost” is a tribute to the times when the way we feel can’t be neatly packaged into a pretty poem about falling snow, but is instead a swirling, uncontrollable storm. The fast, dizzying pace Blum works this track into borders on overwhelming before dying down into an abrupt end: “I’m not Robert Frost, if I wrote a poem about decision it would start and it would end in the same place.” Much like the final lyric implies, the listener is taken on a cyclical journey with this track, rising with Blum to the dizzying climax and eventually deposited, hopefully, back on solid ground.

Countenance — The Royal They

The Royal They is an interesting experiment. Between rock guitarist Darrell Dumas, drummer Rick Martinez with a background in jazz and lead vocalist Michelle Hutt, who was trained in classical and musical theater stylings, the eclectic group comes together to form a truly adventurous punk band, continually forming and refining their style. However, “Contenance” from their self-titled 2016 debut album pumps the brakes—a far cry from the expected brazen and unapologetic punk sound, this track feels more like a lullaby in comparison. Hutt’s high, almost girlish vocals fade in and out between a melancholic guitar as the outro echoes, “You are, you are, you are what you are. You’re never better than the weight of your words. You are, you are, you are what you are. You’ll never be so helplessly self-assured.” And with it, you can’t help but find yourself swept away with the melody, humming under your breath—the outro becoming a refrain that sticks around long after the track finishes.

This ethereal track from P.O.S.’s 2017 album, Chill, dummy sinks into your bones with a thrumming, smooth baseline interspersed bright sparks of percussion. Instead of a slow build that hits its peak and backs off like other tracks on this list, “Faded,” spirals inwards, slowing down and zooming in further and further with each iteration—and suddenly your head is underwater. “It’s feast or famine, and I honestly kind of hate both,” P.O.S. raps, and with this in mind, “Faded” both subverses this pattern of musical highs and lows and centers its lyrics around that same instability and the need to fill an unnamed void. Lady Midnight’s rich voice cuts through the syrupy chaos with the bridge, a plea to “Slow down, I promise if you do I’ll stick around,” and with it, urges the listener to reorient as well: “I know my promises ain’t much to you but now, you’re here, I’m safe, I’m sound.”

Take Up Your Spade — Sara Watkins

This track invites the listener to awaken a part of themselves we often leave ignored—the part that wants to feel grass on our bare feet, to lie down in the sand and absorb every ray of sun and breath of wind that sweeps over our skin. This final track in Watkins’ 2012 album Sun Midnight Sun is the perfect closing track to this week’s Songs You Should Hear column, and asks you to get back in touch with the simple pleasures and rewards of life, of shedding your old skin and beginning anew. The charming banjo and xylophone featured in this track make for an undoubtedly wholesome listening experience, and the increasingly extravagant harmonies in each repetition of the chorus are reminiscent of blooming plant life, bursting from soil. This track ultimately invites the listener to forgive themselves, to cast off the worries of the previous day, and to “Give thanks, for all that you’ve been given. Give thanks, for who you can become.” Listen to this one while watching the sunrise for the full experience, one that would undoubtedly leave anyone feelings renewed and re-centered.