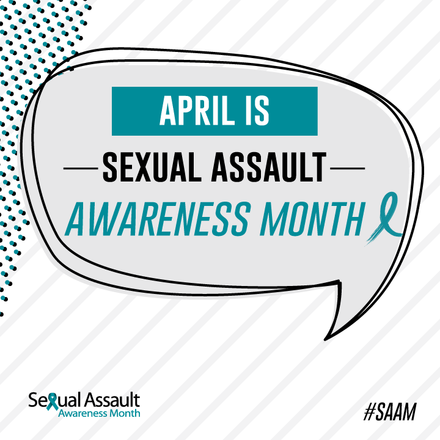 In the past, SAAM on campus has been put into motion by InterAct, a New College orginization dedicated to the prevention of sexual assault. But due to the rapid shutdown of on-campus services, this year’s SAAM resources and events have been single-handedly curated by Barbat and Parker. Most students are familiar with Barbat’s history of sexual assault activism on campus as former president of Generation Action, New College’s Planned Parenthood group, but Parker has also been involved in sexual assault activism from her time as a student. Participating in a Title IX Independent Study Project (ISP) and interning at Sarasota’s Safe Place and Rape Crisis Center (SPARCC) throughout all four years of college, Parker said she’s been heavily invested in Title IX work at New College since she was 18. After graduating from Stetson University College of Law in 2017 and holding a similar position at Ringling College, she became Deputy Title IX Coordinator during the 2020 ISP period.

Coming to New College while the majority of students were off-campus and due to the unceremonious campus shutdown, Parker said that she feels she has not gotten the opportunity to interact with students as much as she would like and hopes that participating in SAAM will give her the opportunity to do so.

“I’m really excited to give that back to the New College community,” Parker said. “I’m hoping to bring those lessons that I learned both at New College and since then to improve the campus climate and provide insights that, I’m hoping as an alum, might be unique.”

On March 31, Barbat kicked off SAAM by sending the calendar of events to the student’s list. This included resources such as instructions for the #30DaysofSAAM Instagram Contest, established by the National Sexual Violence Resource Center (NSVRC). It also advertised events such as the Healing After Trauma yoga class led by second-year Becca Hawden on April 10 and the Bystander Intervention Workshop on April 21. Barbat also sent an email on April 1 with a series of resources provided by NSVRC, including relevant information on negotiating digital consent.

The calendar of events features the reappearance of  past New College SAAM events and annual events from various national sexual assault prevention organizations. The Virtual Clothesline Project on April 15, for example, is a long-running national SAAM event in which attendees decorate shirts with art or messages with a focus on assault prevention and awareness, an event that Parker also participated in as a student. Barbat said that these events had all been planned before the campus shutdown and that most translated easily to a virtual medium.

Some events got lost in the transition, however. One example isTake Back the Night march, in which survivors and activists would walk together with candles in hand to the bay in solidarity. Parker had arranged for Katie Koestner, Director of the Take Back the Night Foundation, to be on campus for this event before the order to evacuate was sent.

While this transition has cost students certain experiences during SAAM, Parker says that it has also led to a greater understanding of what might benefit students during this difficult time.

“We’ve shifted our perspective to what students might be in need of right now and what it sounds like is solidarity as opposed to these more ‘challenging awareness’ conversations,” Parker said.

While some might question the significance of SAAM while no one can be on campus, Barbat noted that orders to practice social distancing mean that people are at a higher risk of sexual violence than ever before.

“China and Italy both had reports of increased rates of domestic violence following shelter-in-place orders and it’s likely that we’ll see rates continue to increase across the world as people are continually encouraged socially-distance themselves,”Barbat said. “As people are forced to cohabit and be around potential abusers longer, the risk of domestic violence increases.”

Barbat also says that recognizing SAAM at New College is a necessary tradition, as it combats the perception that sexual assault doesn’t happen on smaller college campuses and continues creating discussion on how New College can continue to improve as a space for survivors.

“This is a really important time for everybody to reflect on the way that we, both as a community and society, understand sexual violence in our communities and recognize the ways that we can prevent the violence,” Barbat said. “Either through learning how to prevent our own actions from harming other people or by learning how to be active bystanders in the prevention of sexual violence.”

Parker also hopes that New College can continue to observe SAAM in meaningful ways in the coming years, if the suggestions from students and aid from administration, even during a campus shutdown, is anything to go by.

“I can’t speak any more highly of the input that I have had from students, the work students have been doing, the support that I had from the New College community even in just securing funding for different events,” Parker said. “Just to know that this was a priority, it really meant a lot and I’m hoping that I can keep up that momentum.”

But until students and faculty are back on campus, there is the matter of giving platforms to and supporting survivors in the present. Parker said that SAAM can be a difficult time of year for survivors even when they have a sense of physical community to rely on and that it is essential to recreate this community as best as we can online.

“Right now, there’s a huge need for community, particularly with regard to survivors who have had the meaning of the participation and events taken away from them,” Parker said. “I think it’s important to encourage alternative ways of coming together during this time.”

In the meantime, anyone in need is encouraged to access the following resources: Taylor

Parker—who is still able to respond to and investigate reports off campus—can be contacted at tparker@ncf.edu. SPARCC’s website can be accessed here, which includes services such as a 24/7 hotline at 941-365-1976 and the ongoing offer to shelter anyone in the Sarasota area. Finally, the National Sexual Assault Hotline at 1-800-656-4673 will route the caller to their local resource provider based on area code.