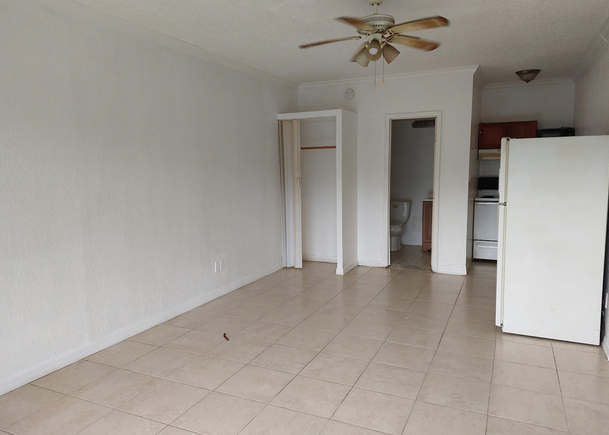 This 300 square foot studio apartment in Sarasota goes for $725 a month. Photo credit to interviewee Nick.

Sarasota is making a name for itself as one of the most unaffordable places to live in the state as rent across the country continues to climb. As New College students who remain local seek housing after graduation, they struggle to acquire affordable and attainable housing in the area.

According to the National Low Income Housing Coalition (NLIHC), there is a shortage of housing available to individuals living at or below the poverty line in Florida. In Sarasota in particular, one bedroom apartments and studios are going for as high as $1,800 per month.

A few local alums spoke to the Catalyst about their experiences of trying to find off campus housing in one of the most competitive housing markets in the state. All four interviewees asked to have their last names withheld due to concerns regarding the potential for issues to arise with landlords and other housing affiliates.

Liz (‘22) and her live-in partner Andrés recently secured a one bedroom one bathroom apartment in Sarasota in July.

Both Liz and Andrés recently began working for a local nonprofit, and described their experience of trying to locate housing in Sarasota after Liz’s graduation in May. After struggling for weeks to locate affordable housing, Liz was finally able to find a landlord through her employment, who gave the couple discounted rent due to their employment with the nonprofit.

”We actually got very lucky,” Andrés said. “[Liz] was able to find someone who was a landlord and who was able to give us our place for a really low rent compared to everything else going on right now.”

“The landlord was very transparent with us and told us that the market value was actually $1500 to $1700, which is ridiculous,” Liz added. “It’s a one bed, one bath and it’s 600 square feet. I don’t think we would have been able to afford it, to be honest.”

The pair described searching for a home on apps like Zillow and Trulia to see what the average rent was in the area.

“The Sarasota housing market was basically the same as the Miami housing market,” Liz, who grew up in Miami, reported. “We were getting nervous that we couldn’t find something we could afford.”

Other alums have also been struggling to find and access housing in the area, such as Andi (‘22) and fiance Nick (‘22), who have been trying to move out of their studio for several months now.

“This is the cheapest apartment in all of Sarasota that we could find,” Andi said. “Our rent is $725 a month, but it is only 300 square feet. There’s an oven in our bedroom.”

The building, which was a motel before it was converted into apartments, has a variety of safety and maintenance concerns. Since moving into the studio in May of 2020, the couple described a variety of issues including crumbling and slippery stairways, a lack of fire alarms, unreliable air conditioning, broken plumbing and a cockroach infestation.

“It’s definitely not safe, but it’s the only thing we could afford in the whole county,” Andi said.

The couple has made several attempts to find alternative housing for over a year, but described a variety of barriers.

“Part of the trouble is that a lot of these places that are nicer, you have to meet income criteria. Typically, you have to make three to four times the rent and those places often fill up really quickly,” Nick added. “It’s pretty affordable, but the situation is that they have a very long waitlist.”

As wages remain stagnant across the country while inflation continues to rise, legal protections for tenants are few and far between. However, many locals are proposing potential solutions to the housing crisis, including Sarasota Mayor Erik Arroyo, who stated in a June 2022 op-ed for the Herald Tribune that Sarasotans should push for better land zoning laws, reduction of property taxes for families living below the median income, and advocate for the government a declaration of a housing state of emergency. Sarasota county has also stated that affordable housing is a “priority,” and claims it is “encouraging the market to provide diversity in housing types and affordability levels through land use policies.”

Renting families making below 80% of the area median income are eligible in Sarasota county for the emergency rental assistance program, which may provide up to eighteen months of rental assistance.