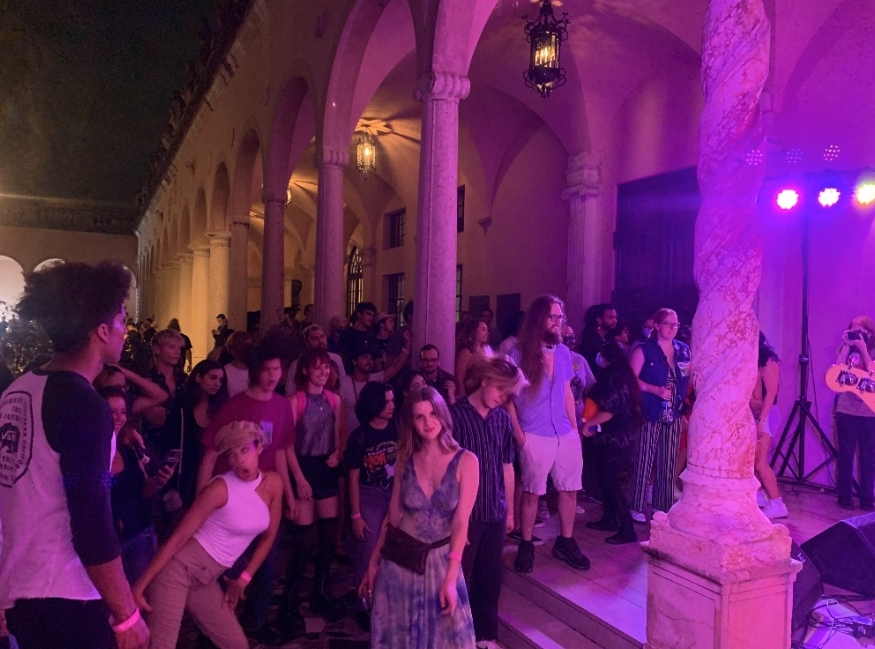 After nearly a year and a half of being on hiatus, Oct. 7 marked the return of the beloved Sarasota social event long cherished by New College students, Ringling Underground. Sandwiched between Caples and B-Dorm, the Ringling Museum welcomes college students with free entry to partake in a lively night of music, art, community and beverages. Being financially and geographically accessible, Ringling Underground was a token of New College social life before the onset of the coronavirus pandemic, giving students the monthly opportunity to dress up and go out for the night. Prior to its return, the last Ringling Underground took place in March of 2020.

This month’s Ringling Underground featured Sarasota’s resident Dreamthing whose member’s feature two former New College students, as well as Tampa’s Glaze, and Palomino Blond, who will be playing at III Points Music Festival in Miami later this month. While bands typically are set to perform on stage beneath the iconic David statue, the performers were stationed under cover of the courtyard’s leftward corner, near the bronze cast of Laocoön, in precautionary defense of chances of rain. Hundreds of guests filled the museum courtyard, providing for a lively and energetic crowd.

Between sets featured a fashion show, Fresco, organized by Ringling College of Art and Design students. Fresco showcased Ringling students who took the concrete runway in ornate fashions recycled from discarded materials, highlighting issues of sustainability within consumer culture. Their website features the tagline, “Trash but make it fashion.” Models strutted the runway in pairs, speed-changing in makeshift tents along the courtyard walkways. Friends in the crowd cheered each other on as their loved ones made their debuts.

The first to perform, Dreamthing set the spirited and hallucinogenic tone for the evening via the band’s psychedelic rock energy. The group quickly garnered a crowd filling the courtyard walls with cheers and dancing. With guests filling the courtyard by the hundreds for the first time in over a year, the night felt like a dream of past life.

Guests, both masked and not, were presented with the optional dawning of masks while outdoors. Though “wearing a mask is strongly encouraged” and “expected when inside all venues” by Ringling Underground, concerns regarding personal autonomy whilst navigating the ongoing presence of a global pandemic were inevitably at the forefront of minds. Despite looming anxieties, the night’s excitement ceased to falter, and the audience’s full throttle energy remained: moving, smiling and grooving throughout all three acts.

Like a siren bringing sailors to treacherous shores, Glaze’s dream pop beat romantically kept the audience glued to the scene, and Palomino Blond’s shoegaze jams ended the night in the same high in which it began. Ringling Underground will return shortly after fall break on Nov. 4 and is free to all students with an ID.