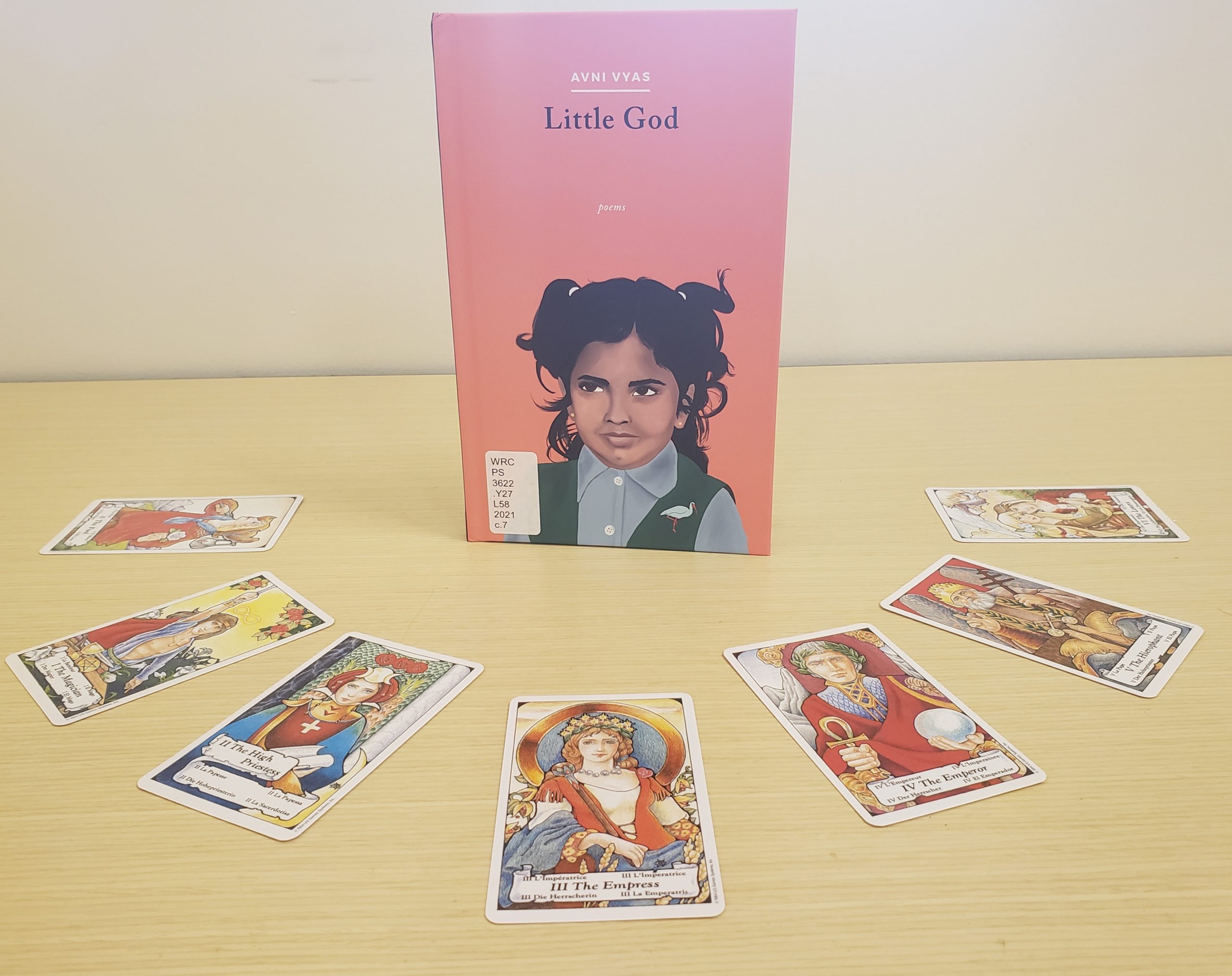 Copies of Little God are available for students to check out at no cost in the Writing Resource Center (WRC). Photo taken by Sophia Brown.

New College’s Creative Writing program is almost three years old at this point; spearheaded in Spring 2020 by Visiting Assistant Professor of Creative Writing Emily Carr, New College students have only recently been introduced to the world of experimental creative writing and poetry in practice. It feels like it has been a long time coming, especially considering New College’s long-standing relationship with the esoteric, the unconventional and the uniquely strange.

On Sept. 22, Carr and Instructor of Writing Avni Vyas invited students to step further into this world for a Poetry & Tarot event from 6 to 7:30 p.m. at Bookstore1 in downtown Sarasota, taking poetry out of the classroom and into the wild—and paving the way for more discussions about the intersections between poetry and tarot both at New College and in the greater Sarasota community.

Like New College’s Creative Writing Program, Vyas and Carr are also both comparatively new additions to the campus and curriculum. Sixth-year Vyas specializes in the  Rhetoric & Writing Area of Concentration (AOC) and Creative Nonfiction, while fourth-year Carr represents the Creative Writing AOC. Together, they have both worked on various poetry-centered tutorials and Independent Study Projects (ISPs).

“This event that we’re doing is kind of an extension of work we’ve already done at New College,” Carr said. “It’s an exciting opportunity for folks to see us out in the world when we’re poets first and professors second, or maybe not at all. Just poets.”

Students interested in courses and events hosted by the duo can expect a myriad of things: tarot spreads, discussions about the creative process, and perhaps most notably—poetry readings from Vyas and Carr’s books, Little God and name your bird without a gun, both published in 2020.

The illustrator for Little God, Mimi Cirbusova—a Sarasota local and long-time friend of Vyas—is also a significant collaborator in the world built by Little God. Vyas explained that the Florida landscape plays a significant role in the book, and that Cirbusova’s relationship with Florida that she infuses into her art breathes new life into the poetry and how a reader might interact with the poems.

“I am so, so thankful it was Mimi,” Vyas said, speaking on their collaboration for Little God. “Because her relationship to Florida specifically created such a unique take on how to move through the poems, how to place the poems in a physical landscape, and also how a visual artist might play with and [interpret] poetry and create their own image palette.”

Little God is especially notable because of how it was composed—”primarily longhand and ambidextrously,” a new and experimental mode for Vyas.

Meanwhile, name your bird without a gun—or bird gun, as Carr took to calling it during an interview with the Catalyst—is also defined by its experimental approach to characterization, plot and narrative, all things Carr claims to have very little experience with. Carr had no prior knowledge of the tarot when she first started writing bird gun in 2010, and was at the time staying at the Jack Kerouac house in Orlando for a three-month fellowship. She had originally designed bird gun as a choose-your-own-adventure style murder mystery, when a friend sent her a care package containing her first ever tarot deck.

“It arrived serendipitously at the perfect time, it was just right there and I was struggling with this choose-your-own-adventure murder mystery, and I just turned to the tarot,” Carr described. “It’s kind of endless how you can use the tarot as a writer. One thing I did was, there’s a character in the book named Liberty—we can call her the heroine—and I gave her tarot readings obsessively. I would pretend that she was sitting across the table from me and I would give her tarot readings, and based on the reading—something in terms of the plot, or who she was, or secrets she was keeping from me or parts of her story that I hadn’t uncovered yet—I was using the tarot in a very generative way.”

Carr goes on to explain that the tarot can act as a “flexible, rigorous, really generous container” for poets and creative writers—”To catalyze yourself, to write in ways that you didn’t expect or think possible,” as Carr puts it.

“I think, currently, Emily and I, we play a lot with the tarot,” Vyas said. “Our conversations interact with it, we speak symbolically, we talk of it like it’s a third person whenever we’re hanging out. And these conversations are generous and sprawling. While I don’t have technical training with the tarot, I do feel very in-conversation with it, and probably like I’ve been in conversations with its symbols for longer than I realize.”

“Being a poet who gets to talk with the tarot is in of itself an incredible language,” Vyas later continued. “I don’t necessarily know the history or symbology behind every single card, but the interpretive invitations for better or worse are just—for poets, it’s a candy store.”

During a joint interview, Carr and Vyas both shared their favorite tarot cards: the Queen of Swords and the Queen of Pentacles, respectively.

C: It’s a really bizarre tarot card to have as your favorite. It’s basically like, I want to do a lot of really hard emotional work in my life, and I want to set boundaries and say no and have people misinterpret and misunderstand me, and call me the Ice Queen or the Virgin Queen—it’s not a smooth-sailing happy kind of card. There’s this long story going back to a tarot reading in Amsterdam in 2010 that you have to come to the event on Thursday if you want to know why I have a special relationship with the Virgin Ice Queen of the tarot.

V: this isn’t a card I identify with—[it’s] a super domestic card, home-based. Nothing that I see in myself. But, apparently, it opens up some portals and I can channel the Queen of Pentacles well enough, so I am kind of curious to know what she’s doing in my head. What’s she doing there? Why’s she there? You know how there’s a madwoman living in the attic? Apparently it’s the Queen of Pentacles, who knew.

C: That’s actually really beautiful, and if you were going to have a madwoman living in your attic—which all poets do—she’s maybe the best.

V: She’s also got a place at the table set for the Queen of Swords for whenever she’s ready. You come in, and we have dinner, and, I don’t know, we eat bon-bons filled with spicy peppers.

C: I think that’s great, because I don’t think the Queen of Swords knows how to cook.

Vyas and Carr both expressed hope that their Poetry & Tarot event and others like it in the future will have something for everyone—regardless of any pre-existing relationship with tarot or poetry—and that it will offer students the opportunity to engage with the Sarasota community beyond New College.

“It’s super rad to see professors in the real world, especially to see real-life poets performing,” Carr said. “To see what we do when we’re not in the classroom is hugely galvanizing and life-changing. And quite frankly, if you’re only going to class, you’re missing out on two-thirds of the college experience.”