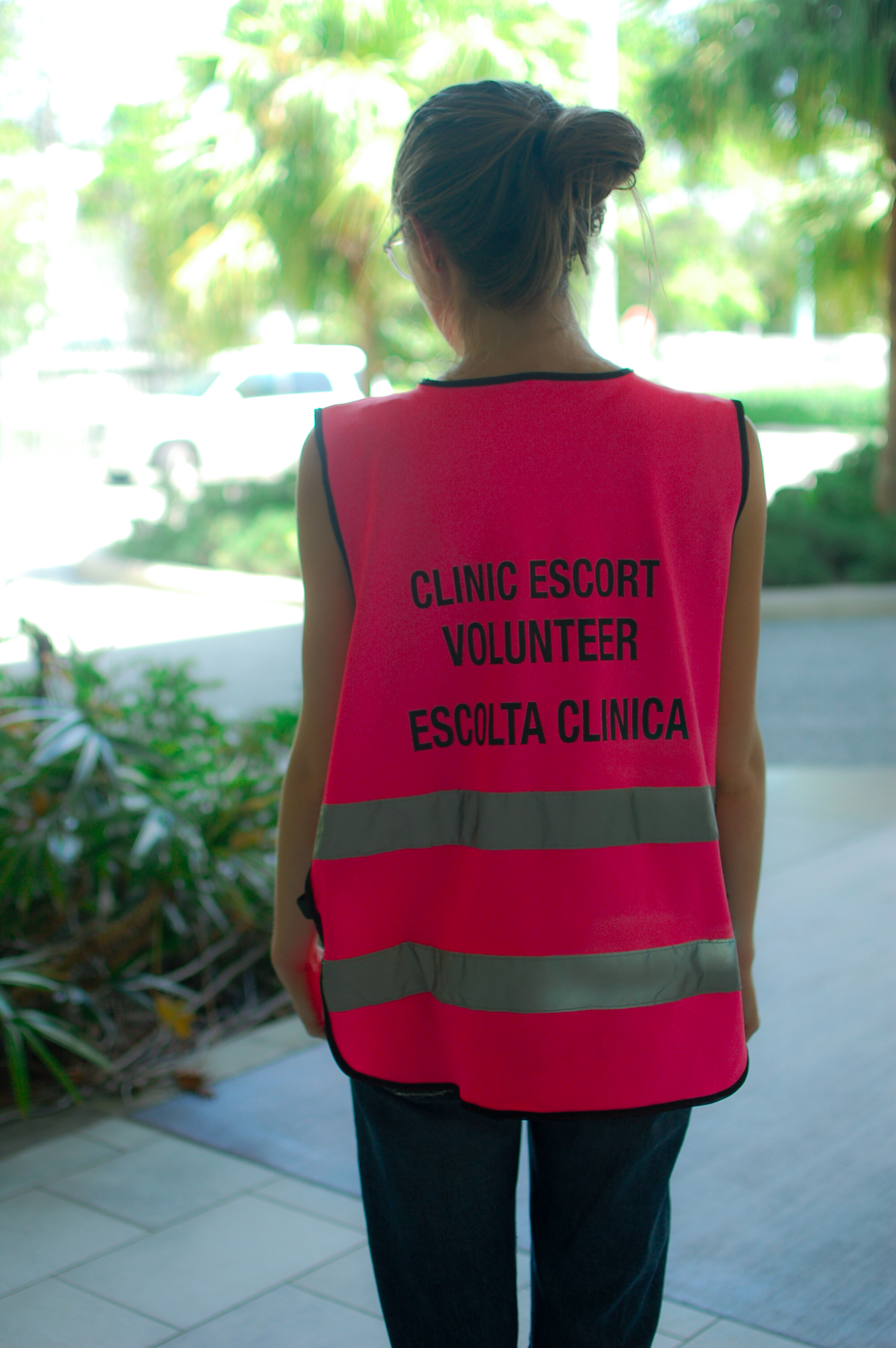 Planned Parenthood escorts, who wear pink vests such as the one above, are asked to never engage with the protesters in any way except for an "excuse me" when attempting to pass by them. (Photo courtesy of Sarah Scully)

On a weeknight after hours, Sarasota’s Planned Parenthood saw an influx of people of different genders and ages gathered together for one reason: to attend escort training. As the group filled up a conference room, candy, wristbands and training handbooks were passed out.

New College alumnus and Planned Parenthood Regional Organizer Sarah Scully (‘13) organized the event, continuing the relationship between the New College community and the local Planned Parenthood, located at 736 Central Ave. This escort training was attended by so many for one reason in particular: the annual 40 Days For Life pro-life protest starts Sept. 27 and runs through Nov. 5, bringing an increase of protesters to the doors of Planned Parenthood.

40 Days For Life is a religious pro-life organization dedicated to “a determined, peaceful approach to showing local communities the consequences of abortion in their own neighborhoods” with the aim to “cooperate with God in the carrying out of His plan for the end of abortion” through fasting, prayer and organizing. Planned Parenthood organizers expect the protests and counter-protests to escalate in size and volume, making the role of escorts all the more vital.

Escorts volunteering for Planned Parenthood wait outside of the clinic on days when abortions are performed and offer to walk patients inside as they arrive at the clinic and back outside to their cars when they leave, all-the-while shielding patients from potentially being photographed or recorded on video. Along with other workers, building security and volunteers, escorts play a role in ensuring patient safety and comfort, especially when protesters are standing outside.

Being an escort isn’t for everyone. Escorts are prohibited from engaging with the protesters in any way except for the occasional “excuse me” while trying to pass. No matter what protesters say, the escort’s job is to put the patient first and to not argue or debate with the protesters. Additionally, things said may be personally nasty and upsetting.

“People do say incredibly racist, anti semitic, classist things,” thesis student Annie Rosenblum said, who has escorted since her first year at New College. “I had never experienced being yelled at like that, especially by strangers.”

Protester tactics include shouting at both patients and escorts, handing out pro-life literature and praying on the sidewalk. Some stick around as “sidewalk counselors”, trying to stop people entering the center and talk to them about other options. Ministers from local churches even come out to pray and lead members of their congregations at the protests. Oftentimes counter-protesters show up and yell back, creating a cacophony outside of the clinic. On days like these with especially loud and visible protests, escorts are essential and can make a patient’s experience much more comfortable.

Originally, Planned Parenthood escorts wore yellow vests in order to differentiate themselves from the protesters and counter-protesters.When anti-abortion protesters got ahold of yellow vests and started wearing them outside the clinic, the escorts switched to bright pink vests, which–for reasons only speculated about–have yet to be copied by the pro-life protesters.

For the most part, the protests are peaceful, with only a scattered few incidents reported at the Sarasota clinic. However, acts of violence such as bomb threats and shootings have happened at clinics in the past, starting in 1993 when Dr. David Gunn was killed by an anti-abortion protester in Pensacola, Florida. Following this act of violence, the Freedom of Access to Clinic Entrances (FACE) Act was passed under the Clinton administration in 1994.

The FACE Act makes it a federal crime to use force or threat of force to prevent someone from obtaining or providing reproductive health care services. Acts such as blocking entrances or parking lots, committing or threatening acts of violence and physically stopping people from entering clinics violate the FACE Act. Shouting, passing out literature and singing hymns do not, as they are protected by the First Amendment. Challenges to the enforcement of the FACE Act under the Trump administration could obstruct access to reproductive care.

For many patients, getting an abortion is a scary and momentous life event, even without the added stress of walking past sidewalk protesters. Although escorting is a simple job, it is important and can make someone’s experience less traumatic.

“That’s one of the hardest days of your life for some people,” Rosenblum said. “Being yelled at and tormented and called awful things is just not fair and the escorts I think really do create a comfortable barrier.”

“I know what it feels like to not feel supported and to feel alone in situations and I just remember thinking that it’s not fair to patients to have to feel that way.”

Campus organizations such as Generation Action, InterACT and Queery provide additional opportunities to learn about reproductive rights, sexual health and gender issues. To get involved with Planned Parenthood’s escort program, visit their site for volunteer information.

Information for this article was gathered from plannedparenthood.org and materials provided by Planned Parenthood, 40daysforlife.com, and prochoice.org.