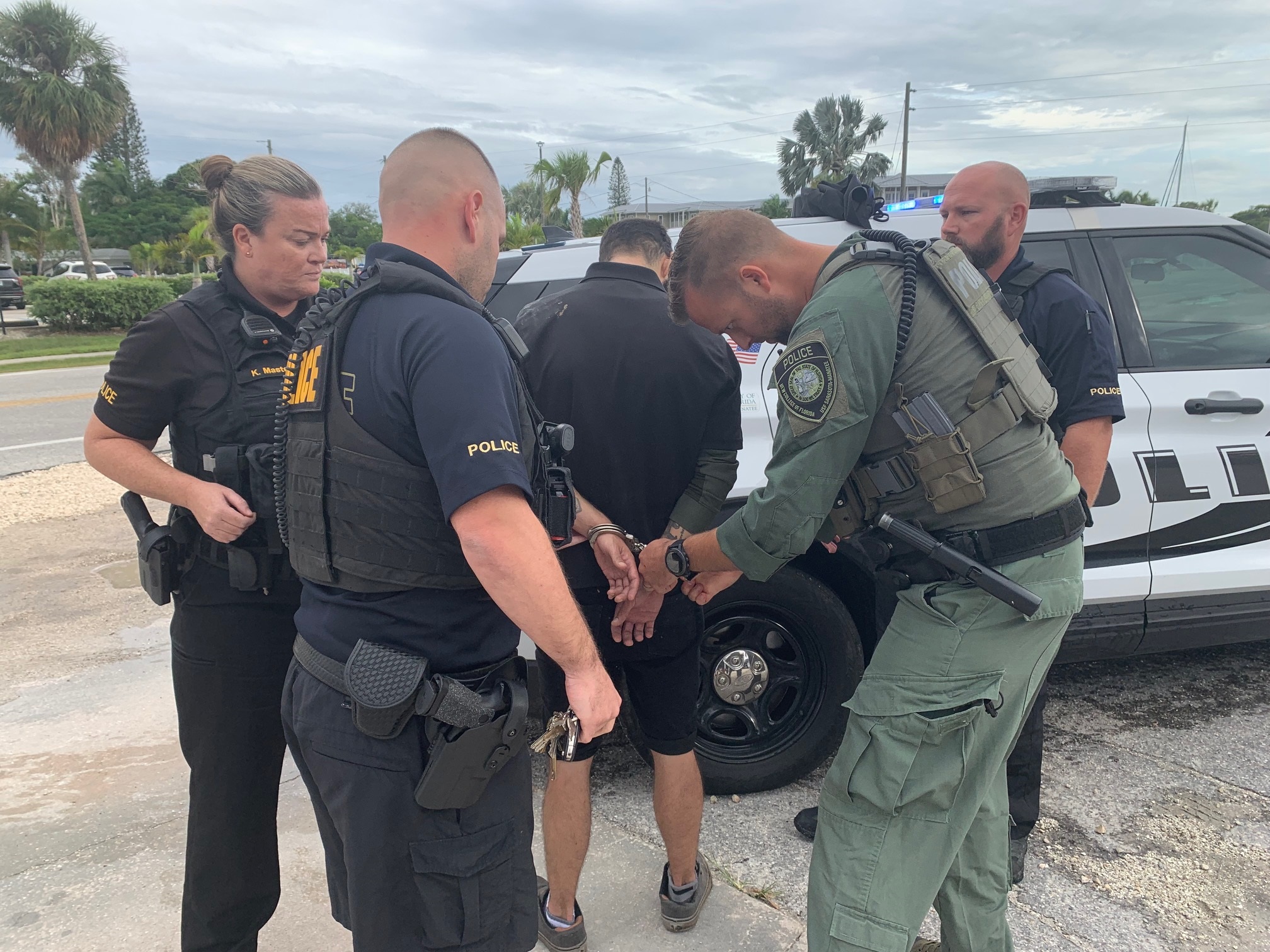 Cannon was initially arrested on Oct. 28, 2021 as the prime suspect of New College's most recent on-campus intrusion--but the jarring truth is that he's still at large without a formal conviction. Photo provided by former CPD Captain Kathleen Vacca.

There is nothing more important than having a safe, secure place to call home. For many New College students, home consists of the various dormitories spread across campus, but just as suddenly as they became home to students in August 2021, they would turn into an anxious nightmare. On Aug. 25 of that year, former offender Jon M. Cannon, age 30, reportedly broke into a dorm at Dort & Goldstein Residence Hall in one of several late-night intrusions that had taken place over the previous year. The Campus Police Department (CPD) received a call at approximately 4:08 a.m. from a student stating that a man had entered their room and made inappropriate contact. Although he was arrested by the Holmes Beach Police Department on Oct. 28, 2021, he was released just two days later. Now, one year later on Oct. 14, 2022, a new warrant is out for his arrest once more.

After being released in 2021 when his girlfriend paid his bail bond, he was put on a restricted schedule, according to CPD officer and Investigations and Training Coordinator John Chirgwin, who was the lead investigator on the Cannon case. This included not being able to leave his house after sundown and having no access to New College property. Multiple court dates were scheduled, none of which Cannon showed up to, prompting authorities to issue a new warrant for his arrest.

When asked about the initial incident, Chirgwin recounts the investigation and the struggle to find video proof of Cannon actually entering the student’s room, and detailed the concerning lack of surveillance cameras within the dark labyrinths of the Pei courts and other portions of residential campus.

“I sat there for days reviewing video, and there was nothing good of him going in the dorms,” Chirgwin said. “You could see him pulling on doors, but you couldn’t see him well enough.”

Chirgwin continued to divulge how they linked Cannon to the case by capturing his license plate on a traffic camera and from collecting his DNA from a grape soda bottle that Chirgwin noticed Cannon drinking out of on surveillance footage. Although this DNA testing took approximately eight months to process from when it was first gathered in 2021, it concretely ties Cannon to the case.

“I know the students value their privacy, but I would like to see more cameras closer to the dorms,” Chirgwin said. “Not focused in on the dorms, but closer to where if we had another occurrence, we would be able to have better video. Especially in the Pei campus, because there’s no video back there at all.”

Chirgwin goes on to explain that Cannon didn’t actually force his way into the dorm, but rather happened upon an unlocked door. He stresses that the most important precaution for students to follow is to take extra care to ensure your doors and windows are completely shut, especially in late evening and early morning hours. Chirgwin also went on record stating that between the hours of 2 to 5 a.m. the CPD patrols the Pei courts and Dort and Gold more heavily, as this is where incidents from the past two years occurred most frequently.

“The biggest thing is [to] lock your doors,” he said. “You see Jon Cannon just pulling on doors. He’s not trying to pick locks or anything, he’s just looking for a door that didn’t get shut all the way or didn’t get locked that night.”

When asked for details about where the case is currently headed, Chirgwin provided the Catalyst with some new insights.

“He hasn’t been convicted of it, but there is DNA evidence connecting him to the university,” he continued. “He wasn’t even living there at the time, he was visiting. He’s from New Jersey and he had done it all over New Jersey, and he went to prison for what he did in New Jersey and paid for those crimes.”

When asked about the progression of the Wyoming case, it was saddening to hear that although Cannon was connected to the case via DNA, he is unable to go on trial as Wyoming can only charge those who are in the state or neighboring states. Initially, the DNA did not link to Cannon, but after authorities received a search warrant for Cannon’s phone, they found he had been Googling the case obsessively. This led them to reevaluate the available evidence, which then linked him to the crime, yet the case remained open.

In contrast to this, Chirgwin says that he has been working with the US Marshals who operate in every state, meaning no matter where he goes, he will be able to be brought back to Florida for trial.

“He’s not going to just stop doing it,” Chirgwin said. “No matter where he goes, they can pick him up and bring him back here. And hopefully the judge this time will not give him a bond, or will give him a high enough bond to where he’ll have to stay in jail until he goes to trial.”

The Catalyst also reached out to students for their response to this alarming news, and how they handled themselves when the break-ins were happening with the most frequency. Concerns arose due to the repetition of the intrusions, and concerns for safety were at an all time high.

“The break-ins made campus feel unsafe, especially because it happened multiple times,”thesis student Jaden Maryanopolis said, explaining the anxiety felt after the intrusions, being an on-campus resident as well as a former Resident Advisor (RA).“It showed them that it was too easy for them to get away with it.”

Third-year Jules Cole described the particular horror of living on campus while not being a Sarasota local. Originally from Gainesville, they’re a student who has nowhere else to go if something terrible were to happen that made their current living conditions on-campus unsafe.

“I moved multiple hours from home, and it would be nice if I could feel safe in what I consider to be home now,” Cole said. Lots of students don’t have any other option besides on-campus housing, so it is even more important that our living space is safe.”

Safety is a necessity, especially on a college campus. With the new warrant for Cannon approved, things are looking up for the relief of the New College community’s anxieties surrounding their safety and security at home.