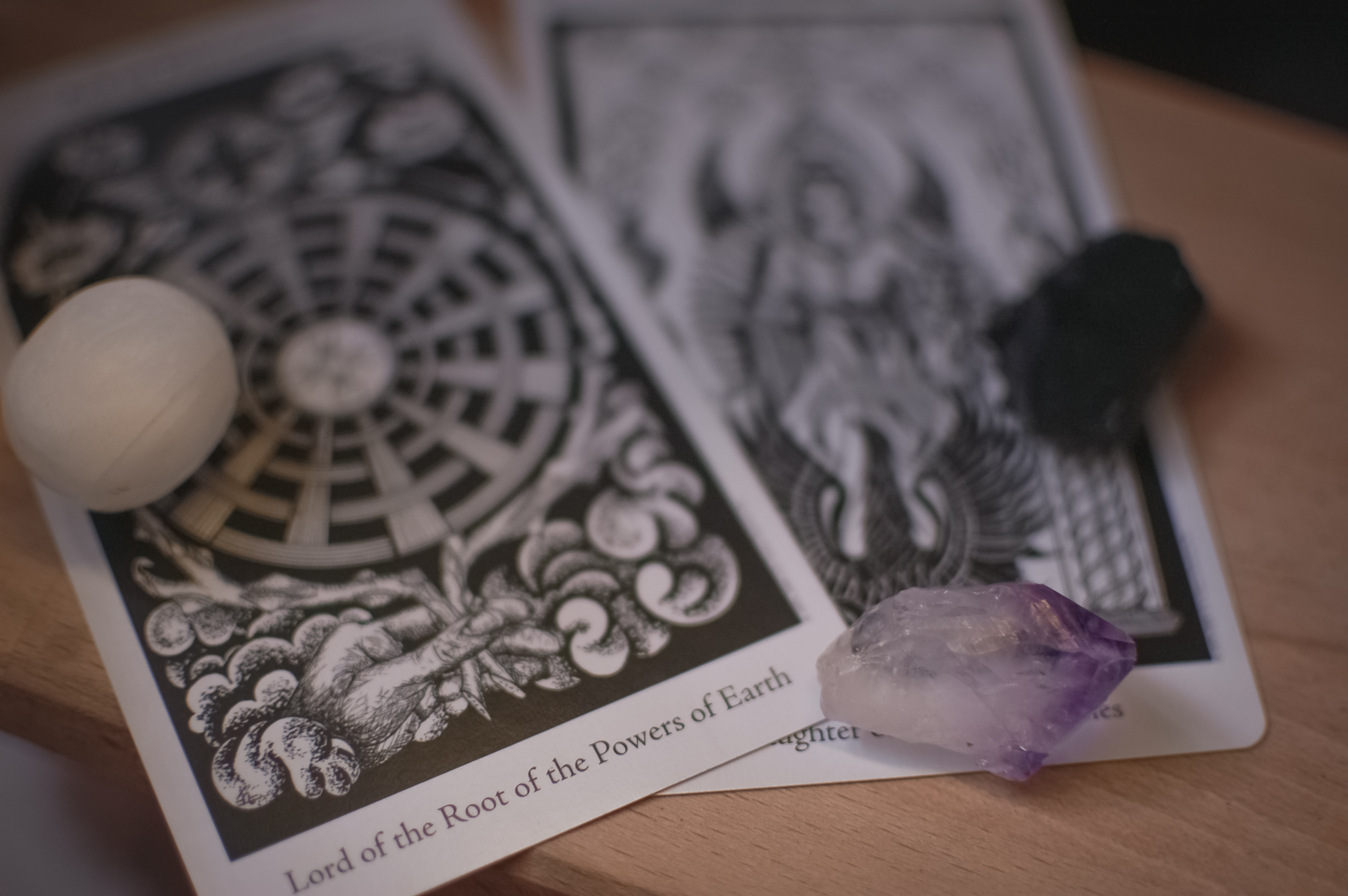 Tarot and crystals allow practitioners to influence their subjective realities. (All photos by Miranda Gale)

On certain nights of the month, some students leave crystals outside their dorms to charge by moonlight. Others anticipate trials and tribulations of the upcoming week by reading horoscopes and charting their sun and moon signs. While the occasional good-natured astrology meme pops up, these types of spiritual practices are taken seriously by their practitioners as a means of connection and self-examination. Metaphysical opportunities on campus include several clubs, past and present, meditation tutorials and the greater student community itself, where many students find new knowledge and support through each other.

First-year transfer student Salua Rivero is a gemini and practices using primarily gemstones, although she has recently expanded her interests to astral projection, a topic she researched for her meditation tutorial. She is also an appreciator of of witchcraft, although does not practice it much herself. Mostly self-taught, she recommends the Spirit Science channel on YouTube and “Spiritual Catalyst” Teal Swan’s works for further metaphysical edification.

Rivero developed her interest in crystals before she came to New College and feels like it is easier to practice here than at her old school, where most of her friends and peers hadn’t heard of using crystals in spiritual practices before. Because other students follow these practices, they can exchange information and teach each other, making learning more fun and memorization of gemstone meanings easier.

One of the biggest questions believers contend with is just how crystals work in practical life.

“I think they work but I think it 100 percent has to do with your intention,” Rivero said. “If I truly believe in my mind that these crystals are going to help me bring love or positivity into my life then it’s going to happen but it’s not going to work if I don’t believe in it. I think it’s a mix of the crystals themselves and their energies with your own good intentions.”

“It’s like you’re trading energies with it,” Monroe said. “But within the metaphysical energy, hippie shit, they’re seen as singular points of consciousness so you can use them in theory to alter your own mental and emotional states.”

As a environmental studies and philosophy Area of Concentration (AOC), witchcraft interests Rivero as an intersection between natural and spiritual forces. She sees it and herbalism as closely connected.

“Basically I think what witchcraft is about is knowing your environment and knowing what is out there that you can use, like the medicinal plants that are available, how to combine them, how to use them for your benefit,” Rivero said. “At the same time like anything else in the world you can turn something good into something bad but it has a lot to do with the intention of the person who’s creating it.”

In addition to crystals, astrology is particularly popular on campus and many students chart their own personal signs. Several websites offer these services for free–all one needs is a birthdate, birth time and the city in which one was born to discover sun and moon signs. From here, one can discover their compatibility with friends and love interests as well as check up on what’s in store for the next week or month. Sun signs are outward presentations of social self, while moon signs are insights into one’s inner or unconscious self.

“Astrology is nosey,” Monroe, who is a scorpio sun and aries moon, said. “If you read your natal chart, it’s like someone has been following you and keeping track of all your personality traits that you know and also are uncomfortable with and then writing them down and presenting them to you. It’s the nosiest thing I’ve ever found that isn’t actually just someone following you around.”

Thesis-year student and Catalyst reporter Cole Zelznak is a leo sun and a capricorn moon. He used to be much more skeptical about astrology.

“I like to read my horoscope now after three years at New College and I find that it’s a nice way to promote some self reflection on what you agree and disagree with about your horoscope,” Zelznak said. “And it’s accurate, I agree with most of the ones I get. So I guess I’m not really that much of a rational skeptic, I’m a skeptical believer.”

Even Monroe and Rivero, both believers, feel that along with open-mindedness, a healthy dose of skepticism allows one to construct a more meaningful and personal spiritual development.

“Keeping that skepticism and challenging everything is important,” Rivero said. “We should be open that [astrology and crystals] could be true but also challenge it, and that’s how you come up with your own spiritual path. Everybody’s different so not everybody has to use crystals, not everybody has to like astrology, everybody has their own path to be spiritual and it doesn’t look the same for everyone.

“I think it’s that dedication of trying to learn about it, doing your research, but also keeping a certain sense of skepticism where you’re like ‘this is not going to solve all my problems’ or ‘this is just a tool but I have to use it’, things like that.”