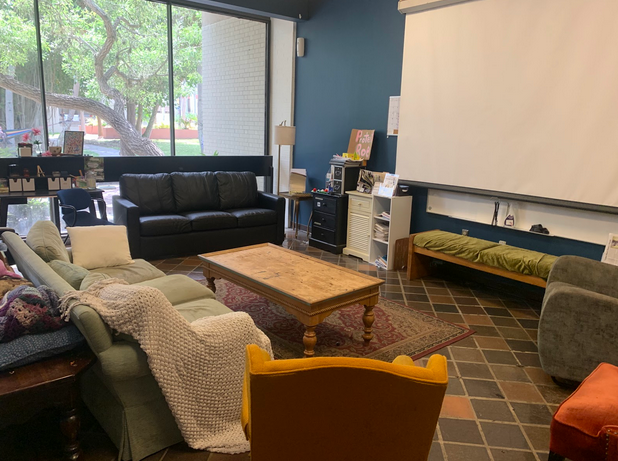 The inside of the Gender and Diversity Center (GDC), which provides New College students with resources on gender, race, religion and sexuality. Photo taken by Nat Kornblum.

Some of New College’s most beloved traditions are the weekly Walls—themed weekly parties that students vote on at the beginning of the semester—and the triannual Center of the Universe Parties (COUPs), which turn the entire residential side of campus into a themed party venue. Parties like these are a time for the hard-working students of the state’s honors college to blow off some steam and take a break from the rigors of New College academia. Students wishing to host a Wall or COUP must present a theme to the student body, who vote on them via a Google poll at the start of the semester. However, a new initiative from the New College Student Alliance (NCSA) has established guidelines for potential themes.

Some Wall and COUP themes proposed throughout the years have been criticized for exclusive or potentially offensive themes. This includes the recently proposed Midsommar COUP, a reference to a popular horror film about a murderous cult living in Northern Sweden, and last year’s proposed “Virginity” themed COUP which included religious imagery and promoted sexual abstinence. Party themes that have been critiqued by the student body for being offensive, exclusive, sexist or racist are not a new concern at New College, as Walls and COUPs with such themes date back several years.

In response, the co-chairs of Diversity and Inclusion for the NCSA third-year Aurelie Campbell and second-year Hayes Garbez have proposed a set of guidelines in the form of questions for party hosts to ask themselves when selecting a theme.

The proposed guidelines, which were sent to the Students List email server on Oct. 4,  encourage potential hosts to ask themselves whether or not they come from the cultural background their party will be representing, to ensure that the event is accessible and to do research into the history of terms and contexts of their theme.

“Lots of things have a history, so what does that history really mean?” Campbell asked about Wall and COUP themes.

“We want to make sure that nobody feels marginalized or excluded by the greater population,” Garbez said. “We want all students to feel safe and included.”

The guidelines are not mandatory, but they ask hosts to really consider how marginalized students may feel attending an event. The co-chairs emphasized the conversational and education-based nature of the guidelines.

“We can have an open discussion space,” Garbez explained. “It’s a self-reflection document for students to go off of.”

Aurelie says, “We want to highlight that it’s an opportunity to learn, so that we can create a much more forgiving campus,” Campbell continued.

Students can make suggestions to the guidelines here.