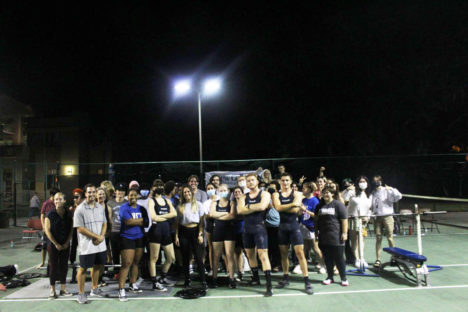 When the words “New College of Florida” are spoken, rigorous physical training and sportsmanship are not likely the first things that come to mind. However, New College is home to several student-run events and clubs that revolve around physical activity, from the recently-formed Running Club to weekly Court Soccer matches, to the yearly game of Zombies that takes over campus. But among these more casual options is the NCF Powerlifting Team, fresh out of the 18th Annual USA Powerlifting (USAPL) Florida Collegiate State Championships and seeking new members for the spring.

As explained by Sidlow, the five each competed in their own respective divisions based on gender and weight class, and were given three attempts to complete each lift: squat, bench and deadlift. Brody-Ogborn, Young and Sidlow all won fourth place in their respective weight classes based on the total weight lifted.

“It’s a fun little event where students, staff and faculty can watch us try to hit new personal records for bench and deadlift,” Sidlow elaborated. “All our members should eventually want to go to a competition, but the main purpose is just to become stronger as a team.”

Additionally, Sidlow noted that the NCF Powerlifting Team has created a new sense of community for her, where she had previously trained alone.

“I joined this semester but have been doing powerlifting independently since the start of quarantine,” Sidlow said. “I had some reservations about doing group workouts because I was so used to working out independently, but I thought I’d give it a shot.”“Joining was the best decision I’ve made this semester,” Sidlow continued. “Whether it be powerlifting or something different, I highly recommend joining some sort of team or club on campus. I also really want to highlight how awesome Daniel and Jacob are as captains. They make the team super supportive. Being my first one, I was so nervous about this competition but they really helped me out. And we’re super excited to be able to bring more people to a competition in spring! To join the team, you don’t need any lifting experience, only a desire to get stronger and a willingness to eventually compete!”