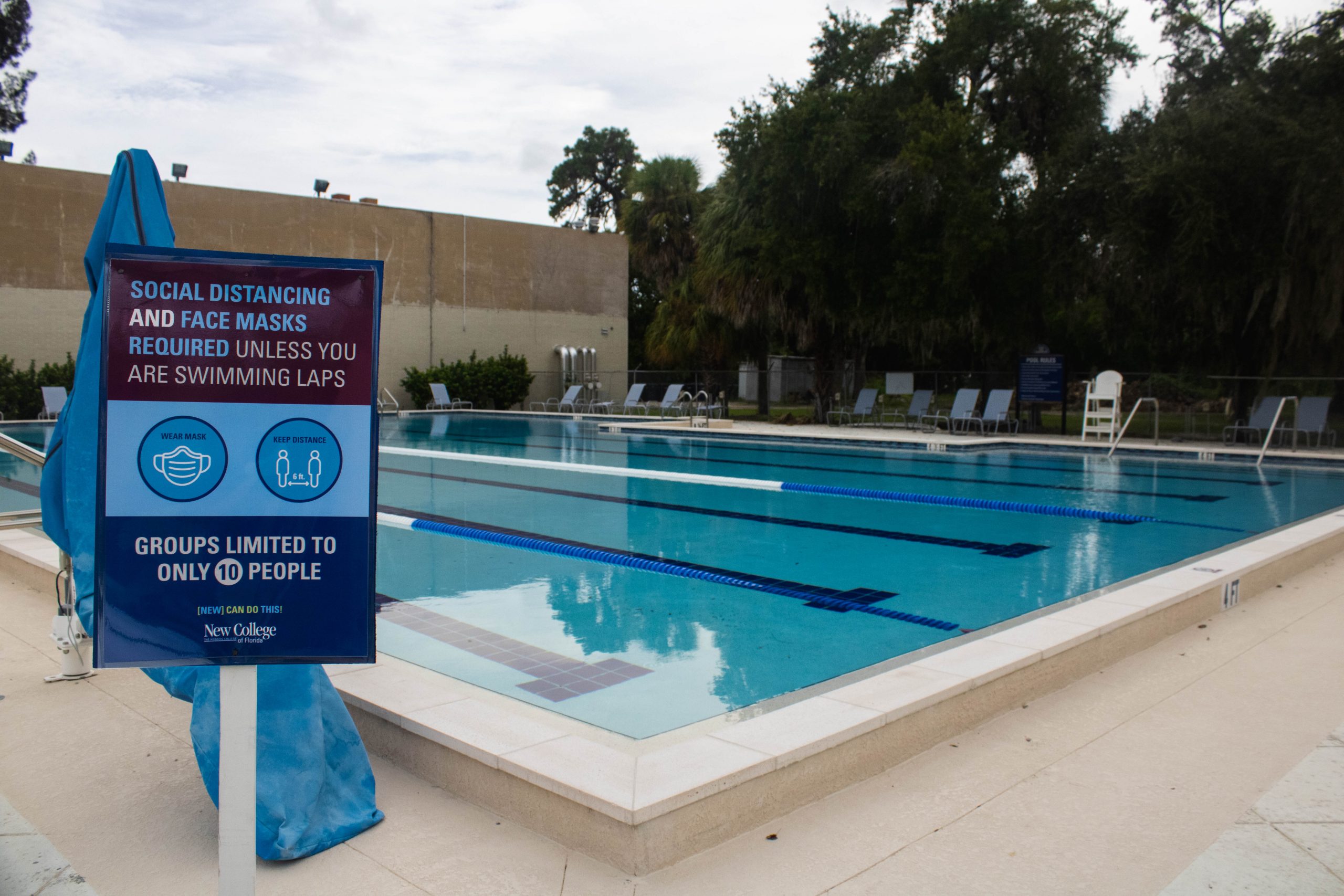 Campus spaces have been marked by changes such as masking and social distancing signs throughout the year.

This school year has been one of the most challenging years many students and faculty have ever endured. Despite the stressful  year, the New College community has shown immense strength, persevering through unprecedented hardship and rapidly adapting to the unique scenarios created by the pandemic. Thesis students had to make difficult choices on how to present their baccalaureate examination (BACC) and adapt their theses due to the pandemic. First-year students experienced the start of their college journey almost exclusively online without much guidance from older students. Their understanding of some of the more unique aspects of NCF, such as Independent Study Projects (ISPs) and contracts, was almost exclusively dependent on the involvement of their advisor. With the end to this difficult semester in sight, there is no better time to look back on the challenges this community conquered throughout the year.

The speed and sheer scale of the pandemic was entirely unexpected, and as such, schools closed down with little warning in March 2020 and after a short break, online classes became the new normal. At a small residential liberal arts college, students and faculty were taken off guard by the sudden switch online, but  both exercised patience and understanding when internet connections at home were unstable and people forgot to unmute themselves.

Thesis student Lucas Rencker-Usui appreciated the extra leniency of his professors during the adjustment to online learning.

“We just went right into [online classes], and all the professors were unprepared for it, so we were doing a lot of things on the fly,” Rencker-Usui said. “That made [professors] approach the classes with more leniency. They were understanding that not everyone had access to the same resources and that it was a difficult time for a lot of people.”

Unfortunately, even though professors did their best to allow students to adjust, many students struggled academically. Second-year Payton Sherer stated that the initial adjustment period negatively impacted her academic performance.

“The transition to online learning was so abrupt that I think nobody fared well from it, teachers and students alike,” Sherer said. “I think we all struggled a lot, especially in that first semester. I barely [passed] my classes because of it.”

The initial onset of the pandemic presented everyone with a unique personal set of circumstances and stressors impacting every aspect of their life in different ways. Summer passed and many students returned to campus for the fall semester for a mix of online and in-person classes. With many of the growing pains of an online curriculum addressed during the initial adjustment period, classes were more organized and effective. However, some issues remained.

While professors were more prepared to teach online and had several new strategies for doing so, many students were struggling to stay engaged with their online lessons. Many students were still coping with the mental strain of a worldwide crisis and battling feelings of loneliness and isolation, in addition to personal matters impacting their lives. Neurodivergent students, many of whom were already putting in extra effort to stay on top of their course load in person, were then struggling harder than ever before to keep up with their classes. Thesis student Nailah Davis found that her ADHD made online classes especially difficult.

“I’ve always found school difficult due to [ADHD],” Davis said. “I’m used to sitting in front of the classroom to force myself to pay attention, but you don’t really have that option [online]. You go to Google something for class, and the next thing you know, you’re going down some weird rabbithole unrelated to class.”

“Distanced learning is not my strong suit,” Rencker-Usui said. “It was difficult for me to learn because I’m hands-on. I’ve got to be doing it [in person]. It’s hard to stay focused and motivated when classes are online.”

Last fall, a new cohort of first-year students arrived on campus and were introduced to New College through an entirely re-formatted orientation, which was held almost entirely online. Orientation groups gathered together in person with their laptops to watch orientation lectures via Zoom. In previous years, students living on their own for the first time were taught valuable information about on-campus living, such as where and how to do laundry through in-person meetings with their orientation leader or resident advisers (RAs). First years more than ever had to rely on their advisors, who were not always prepared to be there for them in that way, for information on contracts, ISPs and what classes they should take.

First-year Megan Pelletier had trouble filling out their contract due to a lack of communication with their advisor.

“I personally didn’t get a lot of help when picking out classes,” Pelletier said. “I talked to my advisor about it, and they suggested I just fill out my contract, but they didn’t tell me how to do that, so I had to ask around for help.”

In addition to general confusion surrounding contracts and other academic processes, information was harder to absorb through Zoom.

“This semester has been very difficult,” Pelletier said. “Learning math on Zoom is nearly impossible.I am kind of worried about the future and taking Calculus III when I don’t understand Calculus II.”

Unfortunately, information surrounding resources that would aid these students in their understanding was not always disclosed to them. Pelletier, while aware of the resources such as the Quantitative Resource Center (QRC) and Writing Resource Center (WRC), did not know how to schedule appointments with a student writing assistant or attend QRC office hours.

Since the pandemic made social interaction in large groups unsafe, many NCF traditions and facets of student life were re-formatted or even temporarily discontinued. Many events that were staples of campus social life had to be put on hold for the safety of the community. Walls, COUPs and other similar events were not being held in the traditional sense. Most of these events—namely COUPs—had to be re-formatted often employing multiple techniques including social distancing and online elements as seen during last semester’s Halloween COUP.

Multiple clubs were temporarily disbanded or experienced a dramatic drop in attendance in addition to having to re-format this year, as third-year Jacob Brody-Ogborn recounted.

“I run the powerlifting club on campus, and it’s indoors,” Brody-Ogborn said. “We used to have 15 to 20 people in a small room within the gym. We had to cancel the powerlifting club for this year, but we are planning to come back next semester. We did not feel like it was safe to run any operation through that club.”

Brody-Ogborn found that some of the sense of community within NCF was lost with the disbanding of clubs like his own.

While this year was a time of hardship for everyone, there are still numerous wonderful events and opportunities to remember fondly. Communities within NCF and all over the world came together to help those in need, as Brody-Ogborn recalled.

“I worked at a food bank in New Mexico last semester and I got to see the volunteers come together as a group working on packaging and distributing food at distribution sites,” Brody-Ogborn recounted. “To see the long line of cars waiting to receive food winding around these buildings and to see everybody, even with the pandemic, come out and support those efforts was really inspiring.”

At New College, some older students made a conscious effort to help incoming students whenever they could. Pettelier recalled that third- and fourth-years reached out to her before she even came to campus. She got to meet and make many friends online.

Despite all the confusion and stress, Sherer said that faculty have been putting in so much work and doing everything they can to ensure their students learn as much as possible.

“Despite everything that has been going on, I can still tell that my teachers are doing their best to engage with their students, and they’re trying to do supplementary lessons,” Sherer said. “I have also really enjoyed getting to know my teacher’s pets and watching my professors’ cats walk across the screen. It’s been nice seeing people making the best of a bad situation.”