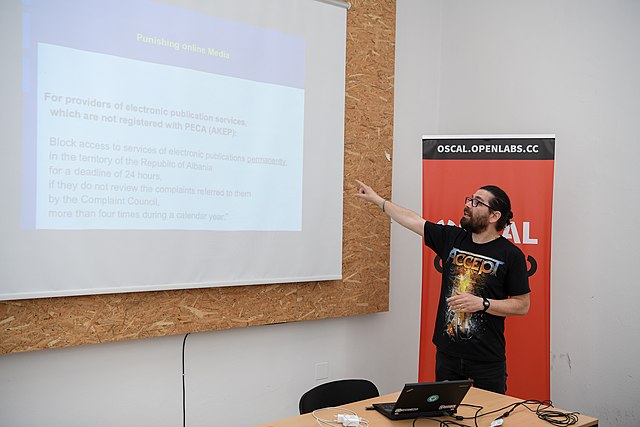 Presentations look a bit different this year, as COVID-19 has limited in-person baccalaureate exams at New College. This is a photo of a pre-COVID conference presentation unaffiliated with the college.

Thesis students were forced to adapt to the unique challenge of completing their theses in the midst of a pandemic, with some battling the negative mental and physical effects of isolation, having to find different resources to complete their research. Then, they had to make the difficult decision on whether to hold their baccalaureate examination—or “bacc”—in person or online. A bacc is an oral exam in which a student defends their senior thesis for a bacc committee consisting of three to four professors. The choice between presenting online versus in person is a difficult one to make as it can affect many aspects of the bacc, but thesis students are adapting.

Caroline Newberg wrote her thesis about the community in Griffintown, a working-class neighborhood in Montreal during the progressive era.  She opted to hold her bacc exam online and noticed that it made some elements of presenting less stressful.

“During the actual presentation it was easy to forget my committee was there,” Newberg said. “It was also easier to get away with essentially reading a script. If I had done it in person I would have had to bring note cards or memorize it more, so it was less stressful in that sense.” However, presenting online also had the potential to cause stress in different ways.

“Presenting it online creates a different wave of anxiety for the presenter,” thesis student Sarah Pincus said. “There’s the anxiety of computer and technology problems.”

Pincus noted that presenting online introduces technical factors that are often out of the presenter’s control. Newberg suffered from this first hand with one of her committee members disconnecting from the Zoom call due to technical difficulties. While potential technical difficulties would not impact a committee’s decision to pass one’s exam, it could still fluster the presenter which could negatively affect their performance. In addition to this, while some may find the lack of a physical audience reassuring, others may find it more stressful as it’s harder to utilize non-verbal communication.

“You don’t have the person to person contact,  the eye contact or physical contact [when presenting online],” Pincus stated. “You don’t have the [physical] support of your good friends or parents, or the encouraging nods of your thesis sponsor. Those do exist, but in a very different way once you [present] online.”

Some students have found ways to navigate this issue. Newberg was able to have her roommates attend her bacc in person, with them watching from the other side of their kitchen table while she presented to her online audience.

While baccs are a rigorous examination, students also treat it as a celebration of their time and accomplishments. Both Pincus and Newberg found that the celebratory atmosphere of their bacc was diminished when presenting online.

“You serve food at your bacc, people would bring in their favorite dishes, and different appetizers,” Newberg said. “Another tradition is you pop champagne after you hear that you passed and that’s more fun when there’s multiple people around you.”

These traditions—while possible online—are likely to be smaller in scale, and as such, it lessened the celebratory feeling of baccs for students like Pincus and Newberg.

Presenting online may have some drawbacks, but it gives students the opportunity to invite friends and family to watch their presentation no matter how far away they are. Students who present online can also still participate in some of the bacc traditions. With enough planning, students can still have a post-bacc celebration while remaining safe from COVID-19, or they can host a post-bacc celebration via Zoom, such as Newberg who got to celebrate with her family and friends despite their distance.