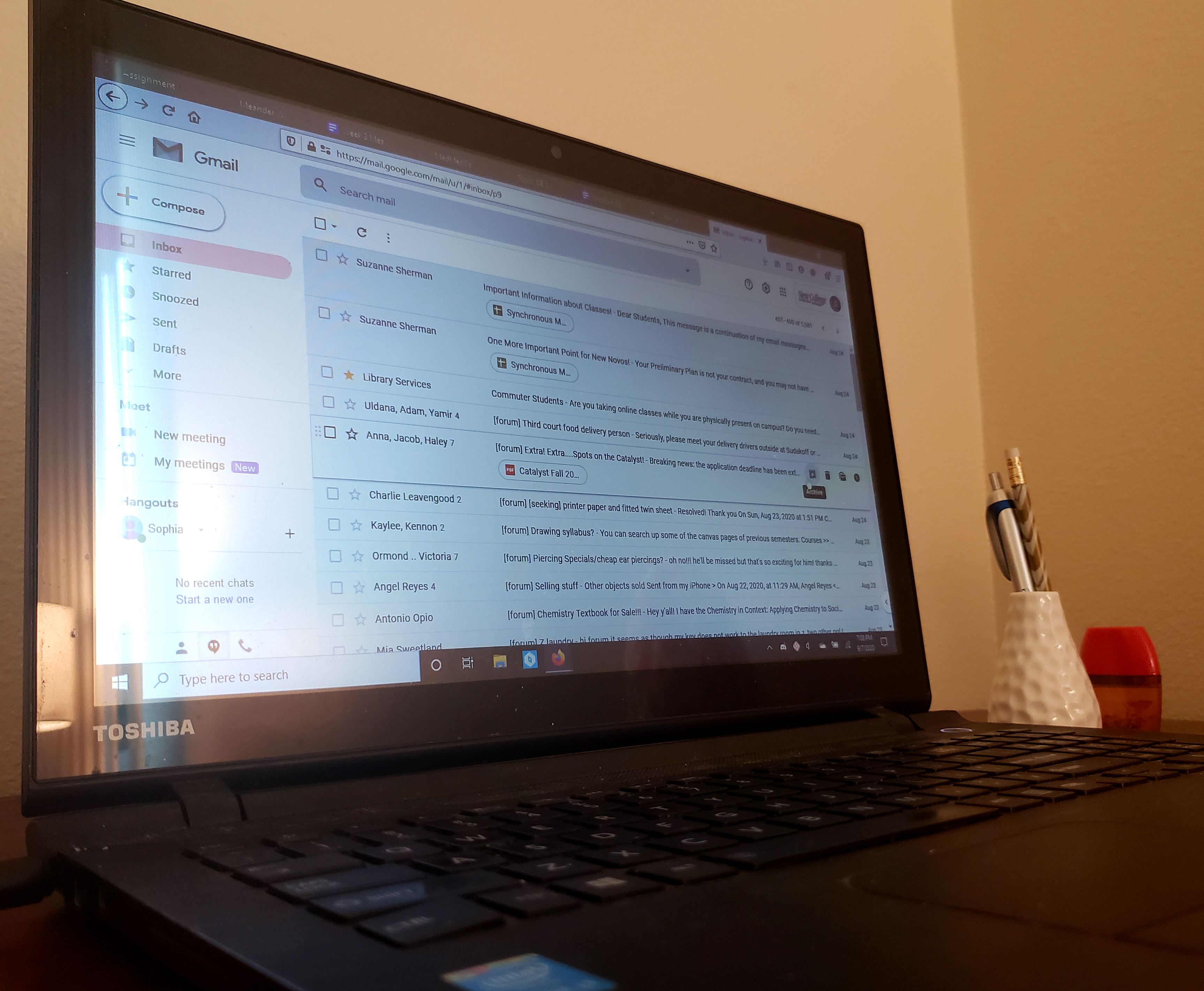 As annoying as students may find the repeated emails requesting that they fill out their Instructional Evaluations, they're a pivotal way for students to make their voices heard in the academic sphere.

This February has seen a series of virtual lectures, screenings and volunteer events in honor of Black History Month, including the “Health Disparities and Creative Intervention” lecture on Feb. 9, showcasing the work of the Multicultural Health Institute (MHI). In a discussion run by founder and New College adjunct professor, Dr. Lisa Merritt, featuring faculty from NCF, Ringling and USF Sarasota-Manatee, this lecture focused on “the yearlong community based COVID-19 intervention that the MHI engaged in,” as stated in a promotional email. But things took a shocking and distressing turn when, approximately ten minutes in, the event was Zoombombed with racist content, forcing the hosts to stop the lecture and relocate to a new call with the few audience members who remained. With an investigation underway, New College is left wondering what the steps should be moving forward in the wake of such an attack.

For over a year, the MHI has held an ongoing seminar series focused on the various intersections between art and health, with an emphasis on building local connections. The series was created when, according to Dance Instructor and Artist in Residence Leymis Wilmott, an interest meeting was held among faculty in order to discuss “how can we fill the gap” between students interested in the arts and community engagement work. From there, the group was able to receive funding through the Mellon Foundation and connect with Merritt and the MHI.

The MHI found a place among the various Black History Month celebrations through a collaboration with Professor of Sociology and Theatre, Dance and Performance Studies Queen Zabriskie, who has organized various lectures and events throughout February.

“I reached out to [Merritt] and she was super excited, but her schedule obviously got crazy with COVID-19,” Wilmott said. “But still wanting to be available, we partnered with Zabriskie and through Black History Month, which was a natural fit for us. We were able to join forces and serve the need for the events that Zabriskie was organizing and coordinating, but also the needs of the seminar.”

“We were not expecting this before COVID-19 hit and even when COVID-19 started we were thinking that we would be back in-person by now,” Zabriskie said about hosting Black History Month events online this year. “There was so much about organizing this online that we’ve had to learn.”

The “Health Disparities and Creative Interventions” lecture, hosted by Merritt and co-hosted by several others, including Wilmott and Professor of English & Gender Studies Miriam Wallace, was scheduled for Feb. 9 from 2 p.m. to 3 p.m. Wilmott said that while past seminars had typically hosted smaller groups, because of the partnership with the NCF Black History Month events, the lecture was registered on Eventbrite and open to the general public. Wilmott also added that the Zoom link to this lecture was the same link as all previous MHI seminars, and that about 75 people had registered to attend while about 47 were present for the opening ten minutes.

“[Merritt] was just starting to do her PowerPoint,” Wallace said. “She showed a lovely painting by her mother, a well-known artist, and was dedicating this presentation she was about to give to her mother and some other people who are important to her. And then things got disrupted. I had never seen one before. I had read about Zoombombing but I hadn’t actually seen or experienced it.”

Wallace describes first hearing strange noises, like “somebody’s mic [was] on and they’re making noise in the background.” Then, using the whiteboard function, someone began writing racist epithets layered on top of the PowerPoint presentation while yelling, at which point Wallace left the Zoom call.

“The important thing is that this was a public event to which we had invited members of our community and it was disrupted in this particularly disturbing and hateful way,” Wallace said. “There are questions about how we manage technology, how we control things, what kinds of settings were set up, but I think the important issue is this was the kind of full-frontal, overt, no-holds-barred racist name-calling that I think many white people like me simply never see or rarely see because we’re just not subject to it.”

Merritt and Wilmott also promptly left the call and began preparing a backup lecture. While Merritt created a new Zoom link from her own account, Wilmott returned to the original call to gather the emails of those left in attendance. Only members with NCF emails or emails that Merritt or Wilmott personally recognized were reinvited to the second lecture and they managed to regroup with what Wilmott said she believes was “half the number” of the original lecture.

“I think there were some people that were probably in shock,” Wilmott said. “We tried to do it as fast as possible to continue. Obviously, they were hoping for us to stop moving forward. But we were still able to move forward and not be silent.”

Several reports were filed via email immediately following the event, including recordings from both Merritt’s end and from Assistant Director of SA[U]CE Jada McNeil, who was also in attendance. Wilmott said that by 5:00 p.m. that day, emails had been going back-and-forth with President Donal O’Shea, Provost Suzanne Sherman, Dean of Outreach and Chief Diversity Officer William “Bill” Woodson and Zabriskie to discuss alternative platforms and to serve as forewarning for other Black History Month events planned that week. The Campus Police Department (CPD) were also contacted in order to kickstart an investigation.

“I was really surprised how many people were proactive and trying to figure out who did this,” Wilmott said. “Tech support also got involved and also Merritt created extra safety precautions [which] make me feel like we can avoid incidents like this, because honestly, this was well-orchestrated.”

Acting Director of IT Benjamin Foss was unable to comment due to the CPD’s ongoing investigation, but IT has recently published some guidelines on how faculty can secure their own Zoom classes, including using the latest version of Zoom, scheduling meetings through Canvas and disabling students’ abilities to screenshare or annotate.

For some, Zoombombing had seemed like a thing of the past up until this incident. However, new research shows that Zoombombing is more often than not an “inside job,” in which a student instigates an attack usually under the pretense of a joke that then goes too far. But because the “Health Disparities and Creative Intervention” lecture was publicly advertised on Eventbrite, it could have just as easily been a community member instead of a student.

“One of the advantages of this is that we’ve been able to bring people in,” Wallace said about holding the Black History Month events publically. “I’ve had alumni who were nowhere near Sarasota come to events, we’ve had colleagues who were outside the U.S. join events. But how do you make it public without giving people access—if you’re inviting people you don’t know? There is something about the way we interact when we’re anonymous online. It’s easier to erase people’s humanity.”

While Zabriskie wasn’t present for the lecture in order to facilitate a separate workshop, she had been attempting to use an alternative platform called Shindig for Black History Month events due to a similar incident in the fall.

“Prior to the event I was trying to get us to use a different platform other than Zoom because this is actually the second event on campus that was Zoombombed,” Zabriskie said. “McNeil was running a series ‘Race, Power, Politics,’ last semester and one of her events was Zoombombed, which is why I think the reporting happened so quickly because she had been through the experience before.”

Zabriskie said that she had been wary of using Zoom for public events like these in the spring and had even been in conversation with Foss prior to the first Zoombombing about using alternative platforms. She added that since this second Zoombombing, administration has responded with the resources necessary to fully transition to Shindig, including additional training. Even so, Black History Month events have continued to be held over Zoom.

“We ended up not using Shindig because of something wrong on their end,” Zabriskie said. “We already had the paperwork, got everything together, but they moved so slow that it didn’t make sense to use it for the remainder of the events because we would need training and there just wasn’t enough time.”

Instead, events in the second half of the month have been hosted on Zoom Webinars. After receiving some training from Foss, Zabriskie said that Zoom Webinars allowed events to be “interactive in a controlled way,” by allowing hosts to mute and unmute people to let them speak and by promoting guests to panelists when they had questions.

“When the first Zoombombing happened on campus, there was no public announcement that this had happened,” Zabriskie said. “I think that part of the issue with not telling and keeping that event silent is that people didn’t think that this was something they had to worry about. They didn’t think that our college events would be targeted in the way that they were.”

As Black History Month draws to a close and with future precautions in place, the question that NCF is left asking is: what now? How does a community so frequently thought of as safe from these kinds of attacks move forward after coming face-to-face with them?

“The Zoombombing of a Black History Month event, to me, spoke to the actions of someone who is trying to disrupt the celebration of a group that has contributed so much to this country,” Zabriskie said. “But is still struggling for equity in so many of our systems and institutions and is still dealing with disparities because of systemic racism and systemic oppression and inequalities. To me, that person who tried to disrupt that celebration of the history of a group of people, but also of an important part of American history and culture—it needed a collective response from our community to show that we don’t support that.”

“I think that for people of color, this is not alarming to us,” Wilmott said. “This is not a shock and it’s not like we can’t move past it. We were still able to hear about the great work that the MHI is doing, and Merritt was able to continue to speak. I think for people that haven’t experienced this personally saw how gracious and how gracefully you can continue. Those are muscles that we’ve built.”

“What does it mean that we only tell the stories about the bad things that happen?” Wallace asked. “Solidarity, support, finding the joy in community and talking about really interesting topics, hearing from really interesting people, doing really good things and celebrating that. That’s the best way to resist what the Zoombombing was trying to do, which is create distress, fear, anxiety, to shut things down. The answer is to refuse to shut things down.”