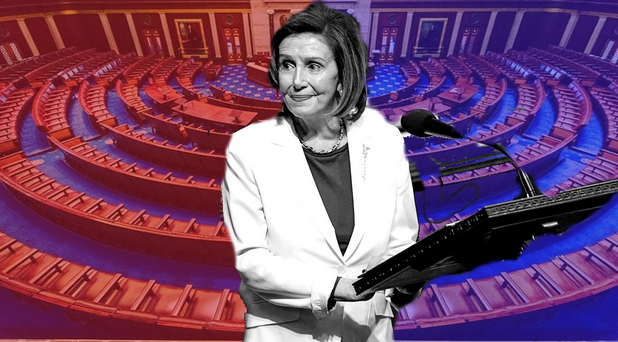 With Pelosi stepping down from her position as Speaker of the House, the floor is now open in a way it hasn't been in many years. Photo courtesy of Caspian Rizzo.

When it became clear that the Democratic Party was no longer going to maintain their majority in the House of Representatives, the already-scrambling party was dealt another significant blow. Nancy Pelosi, who has been the Speaker of the House twice since assuming office—both times that the Democrats have held a majority within the House—was stepping down from her position as House Democratic leader.

While some may view this as the natural end to a 35-year career in politics, others are confused. Crucially, she is not stepping down from her elected position, only her position as the head of the Democratic party within the House. There has been much conjecture about what might have motivated that decision, although most agree that the recent attack against her and her husband probably contributed to the decision.

Now, as the Republicans fumble to find a replacement that their narrow majority will support, Democrats face a similar issue. There is no obvious heir to the position of Democratic leader—Pelosi has held it for so long that most of her contemporaries are no longer in power. Steny Hoyer, the most senior Democratic Representative and longtime lieutenant to Pelosi, has already stated he has no interest in assuming the role of leadership for the minority party.

Many senior party officials have thrown their lot in behind Rep. Hakeem Jeffries of New York’s 8th congressional district, and he has already announced that he is going to make a bid for the position. Pelosi herself has not given her direct support to any of the candidates.

There is concern among many House Democrats, however, that Jeffries is not the man for the job, as his New York district turned solidly towards Republicans. While New York Democrats won, they underperformed by significant margins in the most recent midterms.

While Jeffries—frequently described as a rising star within the Democratic party—seems a shoe-in, it is worth noting that any attempt at taking power will naturally coincide with the equally contentious race for Speaker, something that will inevitably affect any attempt at restructuring party leadership.

On the Republican side, the Speaker of the House positions seem precarious at best. The Republican pick at the moment is House Minority Leader Kevin McCarthy, and while normally getting this through is seen as light work, there’s reason to believe it might be different this time. Representatives Norman, Gaetz and Biggs have all declared that they do not support McCarthy, as many Trump allies in the House seem to think of him as an establishment politician unwilling to curtail the Democratic party as much as they might like. While that might just be posturing, Republicans risk seeing the Speaker go down to a floor fight. It is rare that the position of Speaker requires one vote—it has been nearly a hundred years since it came down to several ballots, and every time before that predated the Civil War.

All of this is to say that as Pelosi’s leadership comes to an end, the House of Representatives–and with it the entire US government–faces a period of turmoil and dissent within its members that is rarely seen in American politics. Pelosi was a once-in-a-generation talent, with an unparalleled skill for controlling a fractured Democratic party and fundraising.