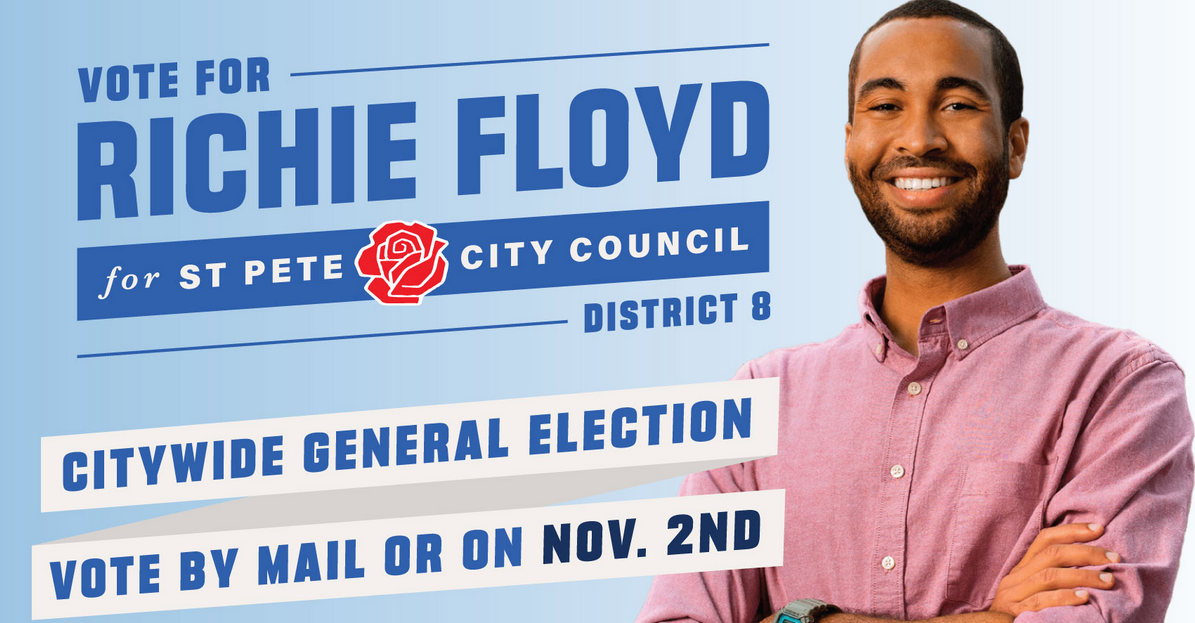 The homepage of Richie Floyd's website, including a headshot.

St. Petersburg’s citywide general election is rapidly approaching in just under a month, and one candidate has amassed attention and success during the August primary election—self-described “unabashed democratic socialist” Richie Floyd. Previously a middle school science teacher and now running for the District 8 City Council position, Floyd’s platform is grounded in the ways his community-centered background has prepared him to effect change in the political sphere.

Floyd also emphasized the ways in which his campaign has allowed him to further connect with the community, and has even come in contact with New College’s own branch of the Young Democratic Socialists of America (YDSA) through Assistant Professor of Political Science and the club’s faculty sponsor Michael Gorup.

“[Gorup] actually lives right down the street from me,” Floyd said. “He connected us because he knew that the same kind of politics I have were starting up at the school.”

Floyd’s policies are sorted into four primary categories: affordable housing, better jobs and higher wages, our environment and social justice. Floyd cites skyrocketing housing prices and how “residents are struggling to pay rent” as one of the primary issues facing St. Petersburg, and proposes improving public housing, increasing investment in community land trusts, expanding tenant protections and coordinating services for the homeless as the way forward. Floyd also suggests that businesses with a minimum wage of $15 per hour be prioritized when considered for grant applications or contracts as an incentive to raise wages.

In terms of environmental practices, Floyd advocates for a citywide transition to 100% renewable energy and an upgraded sewer system to prevent pollution from reaching the bay. His policies also include ensuring that the redevelopment of Tropicana Field includes requiring living wage jobs and affordable housing on site, as well as ensuring that St. Petersburg neighborhoods receive the same level of investment as downtown St. Petersburg.

Floyd’s endorsements include current District 8 councilmember Amy Foster as well as the Democratic Socialists of America (DSA), but other notable endorsements include Rev. Andy Oliver of the Allendale Methodist Church and the Dream Defenders, an activist group that was formed in response to the murder of Trayvon Martin. Floyd is also endorsed by Run For Something and 314 Action, networks that aim to provide platforms to and elect young progressives and candidates with backgrounds in science, respectively.

Those eligible to vote in this local election can either vote by mail or in person. A ballot can be requested at MailBallotRequests@VotePinellas.com by Oct. 23 and must be returned by Nov. 2. In-person voting is also on Nov. 2 at various Pinellas County precincts.

“We’ve connected with thousands of people across the city, knocked on tens of thousands of doors, raised money really well from small-dollar donors,” Floyd said. “It’s been a good time, to be honest. I really enjoy political organizing. I enjoy the work, I enjoy getting to know my neighbors and the people who live in the community. We were very successful during the primary election and we hope to be successful during the general election.”