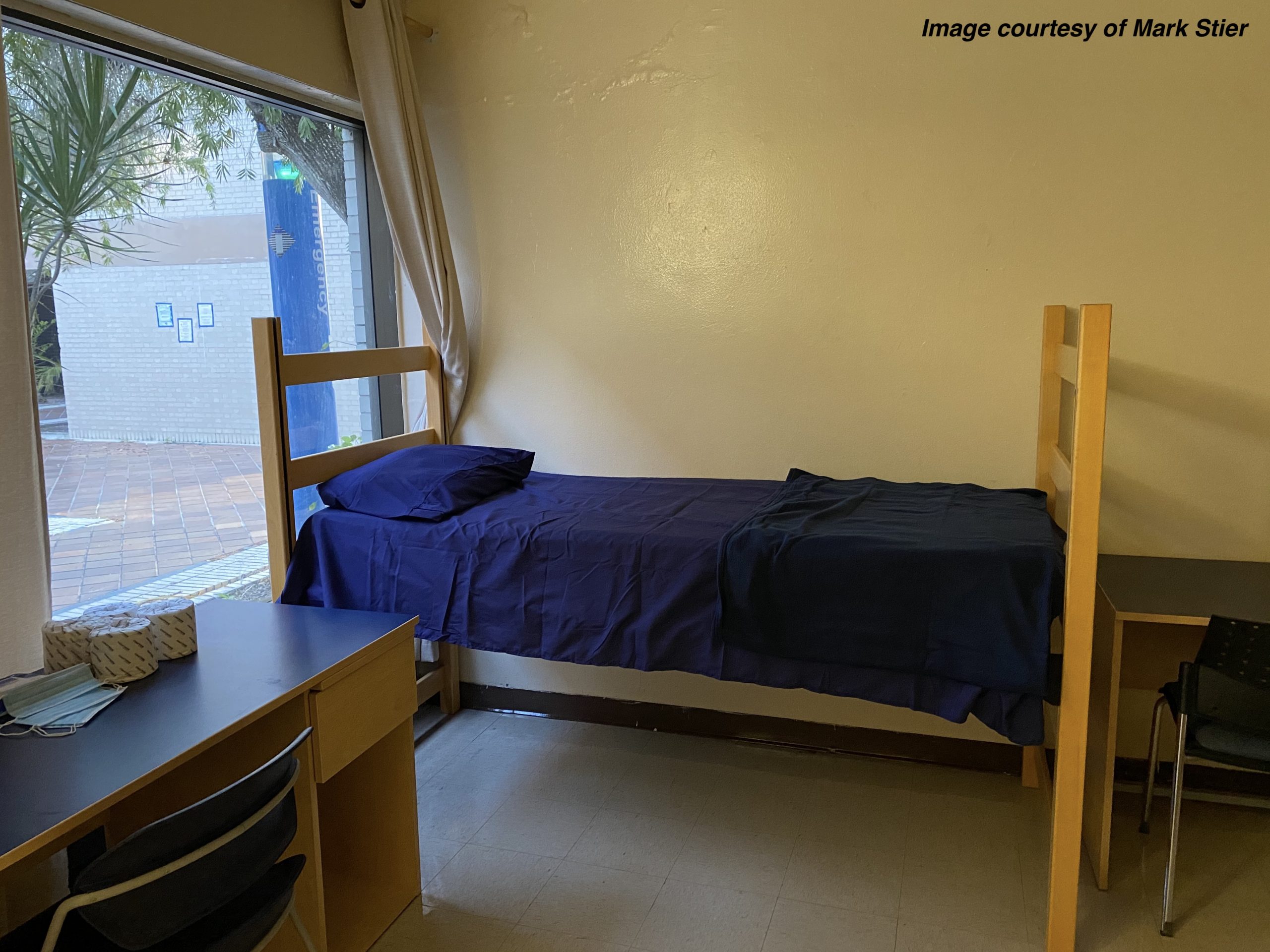 The college has designated several individual dorms for mandated quarantines, such as this room in the Pei residence halls.

Before the school year started, second-year Cecilia Spaugh thought that campus would quickly be shut down because of a COVID-19 outbreak. But as weeks progressed without any cases, she thought the college had made it and everything was okay.

Things stayed normal until the afternoon of Tuesday, September 29, when Spaugh got a call from Associate Director of Residential Education Nicole Gelfert, who is serving as the point of contact for quarantining students. Gelfert told her that she had come in close contact with an individual who had tested positive for COVID-19 and told her to pack the essentials.

Spaugh was also given the opportunity to leave New College and quarantine off-campus.

“Our purpose in quarantine/isolation is to stop community spreading on campus, so we quarantine/isolate them if they are on campus,” Dr. Anne Fisher, director of the Counselling and Wellness Center (CWC), wrote in an email interview. “If they would prefer to be somewhere else off campus, they simply cannot come to campus until they are cleared by [student health services].  We have no way to monitor behavior off campus, nor can we restrict it.”

New College contracts with Student Health Services, run by the University of South Florida (USF), as the medical provider for enrolled students. The CWC may not make any medical decisions for New College students—doctors and nurses at USF have authority over COVID-19 testing and when students are allowed to leave quarantine dorms or return to campus if they choose to leave.

While Spaugh is an example of a student who had to go into quarantine because of proximity to a COVID-positive individual, other students have gone into quarantine rooms because they self-reported symptoms. Third-year Lily Burse had a sore throat and cough and was concerned that she had contracted COVID-19 at her off-campus job. She was having trouble accessing her University of South Florida account for symptom tracking, so she called the CWC.

“They set me up with a telehealth appointment, I told them the situation and then they told me I would need to isolate and take a COVID test,” Burse recalled. “And then, within an hour and a half, I was in the room.”

Although Burse thought that she was experiencing mild symptoms of COVID-19, she came down with serious cabin fever soon after she arrived in the quarantine dorm.

“It’s one thing to be socially distanced and isolated while still being around roommates, and people, or even living alone, but not being able to go outside even was really difficult,” Burse said. “One of the hardest parts was not just being regular isolated, but being actually isolated.”

Both students remarked on the abundance of free time while awaiting test results for the duration of their quarantine. They were tested for COVID-19 soon after arriving, but Burse was quarantined for three days before negative results arrived. Spaugh waited over a week before her test results were confirmed and she was allowed to return to her dorm.

“I guess that part was nice, being able to have a bit more free time, although a lot of the free time [was] just spent being anxious,” Burse said. “It’s not just that you’re isolated, you’re waiting for test results. So you start to worry while you’re in there, like, ‘Am I going to be in here for another 10 days? At what point am I going to be allowed to leave? And what if I start getting sick?’”

Burse worried about what would happen if she got too sick to care for herself. Fisher said that if a student gets that sick, they will not be able to stay on campus.

“If someone is too ill to care for themselves, they would need to go to the hospital,” Fisher said. “COVID consequences are too severe to take chances. We do not have outpatient in-person care at this time. A middle ground might be for the person to go home and be cared for by family.”

All students staying in quarantine dorms are delivered meals from Metz Culinary Management three times per day. The students specified their dietary restrictions upon arrival in the dorm, but they could not choose specific meals.

“I told them my dietary restrictions and what I absolutely did not like, but a lot of the food they brought was not good. It was cold. They gave me a lot of snacks and I pretty much just ate snacks while I was in there,” Burse said.

If a student runs out of meal points during or before they are placed in quarantine, Senior Associate Dean of Student Affairs Mark Stier said that their account will be charged but assured that “no one will go hungry while we are taking care of them during this process.”

Despite the hiccups in the process, both Burse and Spaugh thought that New College was faring well relative to most other schools.

“I felt safe to go back to school because I trust New College students to understand what’s going on and be safe during this time,” Spaugh said. “I think if I was a student at a different school, I would have probably stayed home.”

New College has reported at least three positive cases since the start of the academic year. At Eckerd College in St. Petersburg, where only first year students are living on campus, three cases have also been reported so far. However, larger schools in Florida are seeing case numbers skyrocket: Florida State University has reported nearly 1,600 cases as of October 10.

Burse argued that New College’s small size and tight-knit community decreases the risk of a full-on outbreak of COVID-19.

“New College is pretty tight knit and you know a lot of the people that you walk around and see just going to class,” Burse said. “Nobody wants to be the one not wearing a mask. Nobody wants to get accused of being the spreader. So I think because we’re small and everybody knows each other, there’s a lot more incentive to not be, you know, the asshole that’s spreading it.”