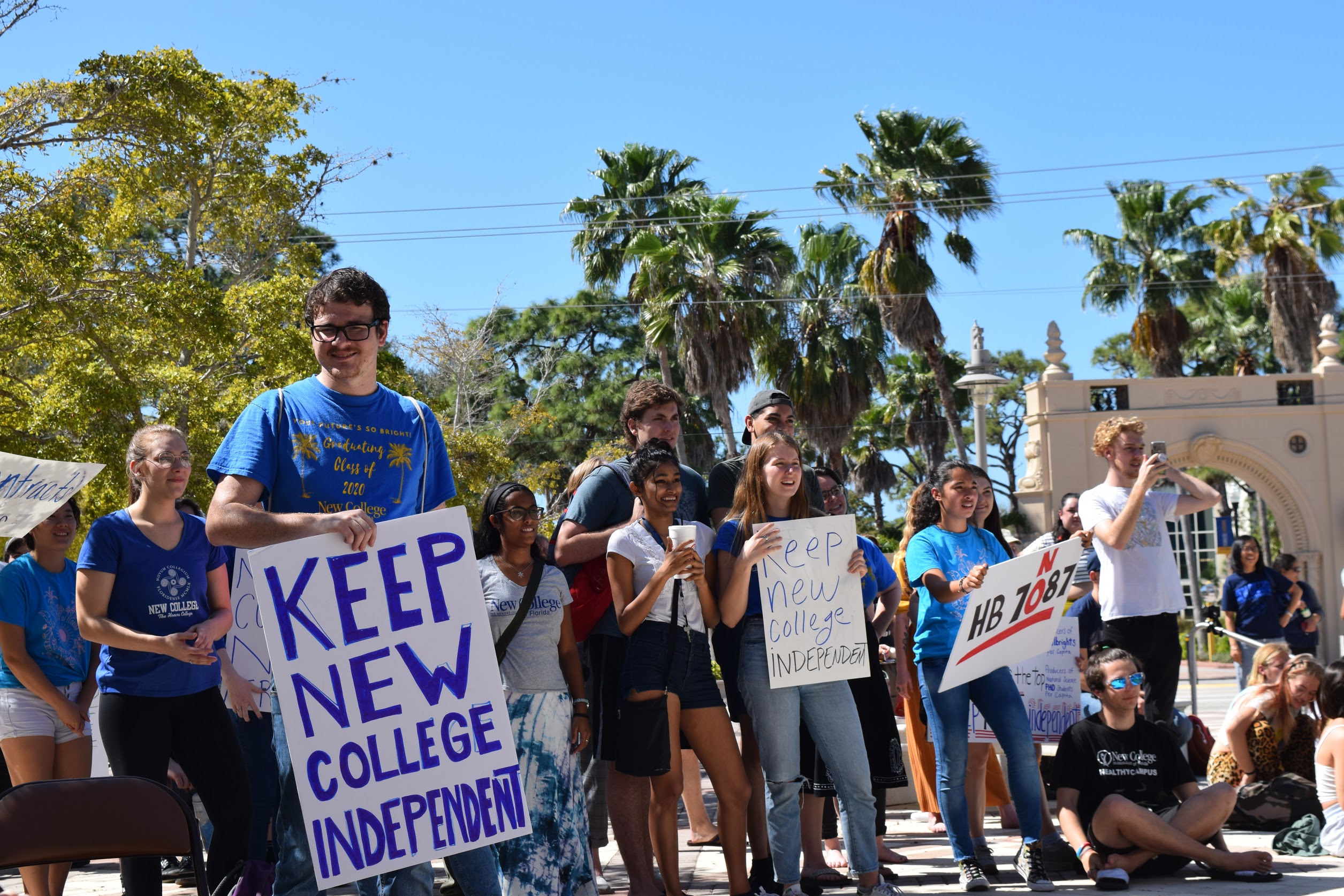 On Wednesday, Feb. 12, the Florida House Education Committee passed a proposed bill that would merge New College with Florida State University (FSU) and Florida Polytechnic University with the University of Florida (UF). The details and potential outcomes of this legislation remain unknown, but Rep. Randy Fine argued that the bill would cut costs for taxpayers. Many vocal students, faculty and staff have emphasized New College’s independent status and are organizing to defeat the bill.

House Bill 7087, states that all of New College’s property would be transferred to FSU. The bill also says that the tuition and fees for current New College students would remain the same until they graduate. The Board of Trustees of all of the involved institutions would have to finalize their plans for the merger by Jul. 1, 2020.

Fine proposed that New College function as a satellite campus of FSU, which NCF Director of Communications and Marketing Ann Comer-Woods confirmed. But further details, such as the impact on the academic program or student life, have not been clarified.

New College President Donal O’Shea, leaders at the other affected institutions and many state legislators said they had not heard about this bill before the evening of Feb. 10. Rep. Fine said that he had consulted with FSU president John Thrasher before announcing the bill, but Thrasher denied having any prior knowledge.

Fine pitched his bill by arguing that the state spends too much money on New College and Florida Polytechnic.

“We have an obligation to taxpayers to generate degrees at the lowest possible cost,” Fine said to Florida Politics, which first reported the story. At the committee meeting, Fine also mentioned higher administrative costs and declining enrollment, despite the college receiving additional funds from the legislature for growth.

Second-year Ellie Young disagrees with how Fine assessed the value of New College.

“The idea that cost per student to the taxpayer is the most important metric of an education [is] really messed up,” Young said. “It’s not like, ‘Insert coin, receive degree.”

New College’s 2018-19 budget of $52 million comprised 0.4% of the state’s total funding on higher education, which is approximately $13 billion.

Professor of Political Science Keith Fitzgerald, who represented Florida’s 69th district in the state House from 2007-2010, said that this bill could be a part of larger political maneuvers.

“My sources told me that it’s part of a complicated political game,” Fitzgerald said. “That doesn’t mean that it’s not a risk.”

In an interview with the Catalyst, O’Shea said that Thrasher and Kent Fuchs, the president of UF, would probably not wield their influence to defeat the bill.

“Both of them have a lot of fish to fry and they’re not going to pick a fight with the legislature over something that’s a drop in the bucket to them,” O’Shea said. “So they will say that they are telling everybody they don’t want it. But they’re not actually going to expend political capital opposing it.”

Florida Polytechnic issued a statement on Tuesday in opposition to the bill and President Randy Avent testified at the Feb. 12 hearing. Neither UF nor FSU has issued a comment.

O’Shea traveled to Tallahassee on Tuesday and Wednesday to meet with lawmakers. He also published op-eds in the Sarasota Herald-Tribune and the Tallahassee Democrat. He has encouraged faculty and staff to call and send letters to legislators.

The bill passed the committee 12-6. All 12 committee Republicans except for Elizabeth Fetterhoff of DeLand voted for the bill, and all but one of the committee’s Democrats, Dr. James Bush III of Miami, voted against the bill.

HB 7087 will be heard next by the House Appropriations Committee. It could undergo further review before heading to the House floor.

The legislative session started on Jan. 14 and is scheduled to end on Mar. 13. Fitzgerald speculated that the bill is unlikely to pass but might remain viable until the end of the session.

“I think at the end of the day, it’s going to be yanked, or watered down with a study or something like that, but you just can’t be sure,” Fitzgerald said. “So it’s a little scary that way, but yeah, we’ll probably keep going until near the end.”

As soon as the news came out last Monday night, student email forums blew up with speculative questions and outrage. But some students started organizing: Second-year Ellie Young hosted an event the following day in the Gender and Diversity Center (GDC) to call representatives and thesis student Alex Barbat compiled the phone numbers for the representatives on the House Education committee.

“I care about New College,” Young said when asked about why she organized the event. “I care about small colleges. I care about education, and I’m very, very upset by this proposal.”

The New College Student Alliance (NCSA) is organizing a walkout at 1 p.m. on Thursday, Feb. 20 on ACE Plaza. NCSA leaders have collaborated with Florida Polytechnic’s student leaders, who will stage a similar protest at the same time.

“I think our biggest concern right now is how do we mobilize students to advocate for an independent New College,” NCSA President Steven Keshishian said.

At the Feb. 12 faculty meeting, less than 48 hours after the debate over New College’s future began, O’Shea reflected on the uncertainty of the moment but assured staff and faculty that their jobs were not endangered.

“If the worst happens and this goes through, there are not going to be massive layoffs, or anything like that,” O’Shea said at the faculty meeting. “I don’t think there’ll be any.”

Buchanan also met with Governor Ron DeSantis on Sunday night to discuss the proposed legislation. Buchanan tweeted a photo of himself with DeSantis on Monday morning and ended his caption with, “If it ain’t broke don’t fix it!”

State Senator Joe Gruters, who represents Sarasota, has publicly announced his support for New College, but Senate President Bill Galvano, who represents parts of Manatee county, has said that he would be open to the idea.

The Sarasota Herald Tribune published an editorial on Feb. 12 in support of New College remaining independent. A nonpartisan, nonprofit government watchdog, Florida TaxWatch, released a statement on Wed., Feb. 12 urging the legislature “to reconsider moving forward with the proposed merger[s].” They also expressed skepticism about the cost-saving rationale.

At the community forum on Feb. 13, third-year Lily Tanner cautioned other students to avoid speculating about worst case scenarios.

“This is a time of a lot of uncertainty. And in times of uncertainty, we tend to cling on to little bits of information that we hear and we pick up. So I strongly, strongly caution you to think about what you’re saying and to really make sure that you’re not coming up with and spreading rumors,” Tanner told the crowd.

She advised everyone to take productive action instead.

“Right now is the time to be focusing on the phone calls and the emails and making our plan and then once the decision is made, then that’s when we can start to kind of be concerned about the implications of this thing. But until then, we need to support one another rather than making people nervous or making ourselves nervous by focusing on what may or may not happen.”