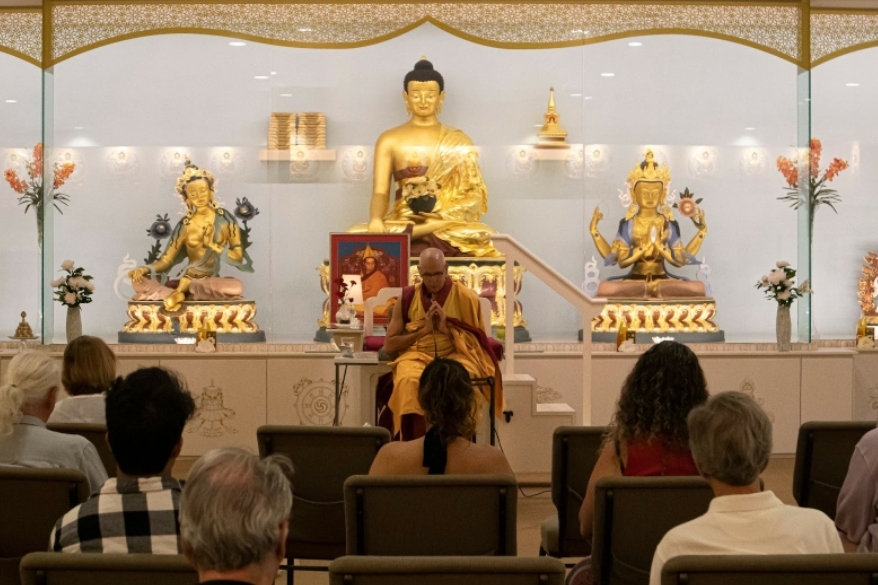 A peaceful and lively chatter fills up the vibrant and spacious rooms of the Kadampa Meditation Center. Interested Sarasota locals and Buddhist monks radiating kindness sit intimately, discussing their daily lives, hopes and struggles over the freshly brewed tea provided by the in-house cafe. As the philosophical discussion and guided meditation the temple provides every Sunday draws near, a diverse and easy-mannered crowd starts to remove their shoes and shuffle away from the couches and chairs of the common area into the ornate and luminous meditation hall. Brilliant and colorful Buddhist artistry lines the golden-hued walls as the resident teacher, Gen Kelsang Dorje, begins a humorous and warm-hearted talk about the profound value and necessity of inner freedom, compassion and love.

The Kadampa Meditation Center is a volunteer-run Buddhist temple conveniently located near downtown Sarasota, only ten minutes south of New College of Florida. Offering a bounty of meditation classes, retreats, books and natural spaces, the temple is an ideal refuge for those interested in cultivating their inner peace and sharing spiritual company—or those simply curious about the rich traditions of modern Kadampa Buddhism.

“We’re not available just to people who think they are Buddhist, because all of these teachings are about how to understand and control the mind and produce a happy, peaceful, meaningful life,” Dorje explained. “So everybody needs that, not just people who call themselves Buddhists. Even though we are a Buddhist center, we want [to help] people who simply want to learn how to be more happy, more peaceful—especially in the face of difficulties and problems. They need to have a place to go to where they can find refuge, a sense of inner peace and well-being, especially in difficult times.”

Kadampa Buddhism is a Mahayana school of Buddhism founded by the Indian Buddhist Master Atisha, who reintroduced the practice of Buddhism to Tibet in the 11th century. The basis of Kadampa Buddhism was to provide the teachings of Buddhism in a way that could be easily understood and put into practice by anyone. To do this, Atisha wrote Lamp for the Path, which served as the basis for the Lamrim, a practical set of instructions to guide practitioners towards enlightenment. It now includes a set of 21 daily meditations to be repeated in three-week cycles, each covering a different topic (such as compassion or equanimity). The tradition claims an unbroken lineage of teachers who carry these teachings into the present day. The Venerable Geshe Kelsang Gyatso Rinpoche, affectionately known as Geshe-la, then adapted these instructions for the modern world and established Kadampa Buddhism globally by training teachers, establishing temples and writing books that are open to the public.

In an interview over black tea, Dorje gave a detailed and easy-to-understand explanation of the meditation practice that Kadampa Meditation Center teaches in its weekly classes and events:

“We often start out with basic breathing meditation, because it’s easy to kind of locate your breath and stay with it. And what happens is, the more you stay with the sensation of breath, the less distractions you have. And you experience a sense of peace and well-being. But you need to go beyond breathing meditation and have what’s called contemplative meditation. Once you relax your mind, free from major distractions, then you meditate on a thought or idea that’s going to move you in a more positive direction and contemplate that. Then you have what’s called placement meditation. Once you develop that feeling or intention, ‘Yes, I want to learn to cherish all living beings,’ you hold that thought. The reason you hold that thought is that it influences you when you’re outside of meditation.”

He then emphasized the importance of attempting to peer deeply into the meaning of those meditations and bring them to fruition in daily life.

“It’s nice to get some good feelings while you’re in meditation, but if you leave it on the cushion, then there’s nothing for the rest of the day,” Dorje continued. “So you actually want to get some insight in your meditation, and then be able to practice that insight throughout the day. Because maybe someone who spends less time meditating, maybe 10 minutes, but takes on the thought, ‘I’m going to learn to cherish living beings,’ and holds that throughout their day will get more benefit than someone who meditates an hour a day but doesn’t take that positive feeling with them.”

When asked what he would say to those interested in meditation but who had trouble concentrating or felt it wasn’t for them, Dorje kindly chuckled, then smiled and offered some advice.

“I get that a lot,” he said. “‘Oh, I can’t meditate’. A lot of times people think, ‘I have to stop thinking,’ you know, and that’s not what meditation is about. Meditation is about learning how to contemplate and think about things that will be more beneficial or positive, to actually change and transform your mind. Meditation is not about not thinking. It’s actually about learning how to think in ways that would be more beneficial.”

“The other thing with concentration is, it’s not hard work,” Dorje said. “People like to concentrate; when you’re doing something you love, something you’re interested in, no one has to tell you to concentrate, you’re like, in the groove and you want to stay there. People do that with their art, maybe with their music, with video games. And they’re not told, they just get absorbed in their activity because they’re so interested in it. Once you realize the benefit of meditation, you’re deeply interested in it.”

“Now, all that takes a while to build experience with it,” Dorje concluded. “So you have to be gentle in the beginning, very patient, and not try to do too much. It’s not like you meditate one time and you’re going to become this amazing yogi. Just be patient with yourself, maybe even a 15-minute meditation, and you build from there.”

The temple itself includes a bevy of spaces to enjoy; from the natural shade provided by the Bohdi Tree in the open yard (said to be a direct offspring of the original); to the luminous “chanted prayers” meditation room; to the World Peace Cafe in the common area; to a host of thriving flowers and wildlife (including an outdoor cat).

What’s more, it may hold interesting connections to students of New College. Not only have students been said to frequent the location since its founding, but many of the staff currently overseeing the temple are themselves alumni or otherwise affiliated. For example, Talmadge Alzorko,  a volunteer at the temple for more than 20 years and current head of the cafe, even shared that they had celebrated their birthday at the Four Winds Cafe and were close with Kit, the student memorialized in the mango grove.

For those interested, the temple is open 30 minutes before and after its scheduled services, classes and events. It’s worth checking out, whether you want to learn meditation, absorb colorful Buddhist paintings and sculptures, speak with monks and alumni, or sit beneath the Bodhi Tree and enjoy the natural environment.