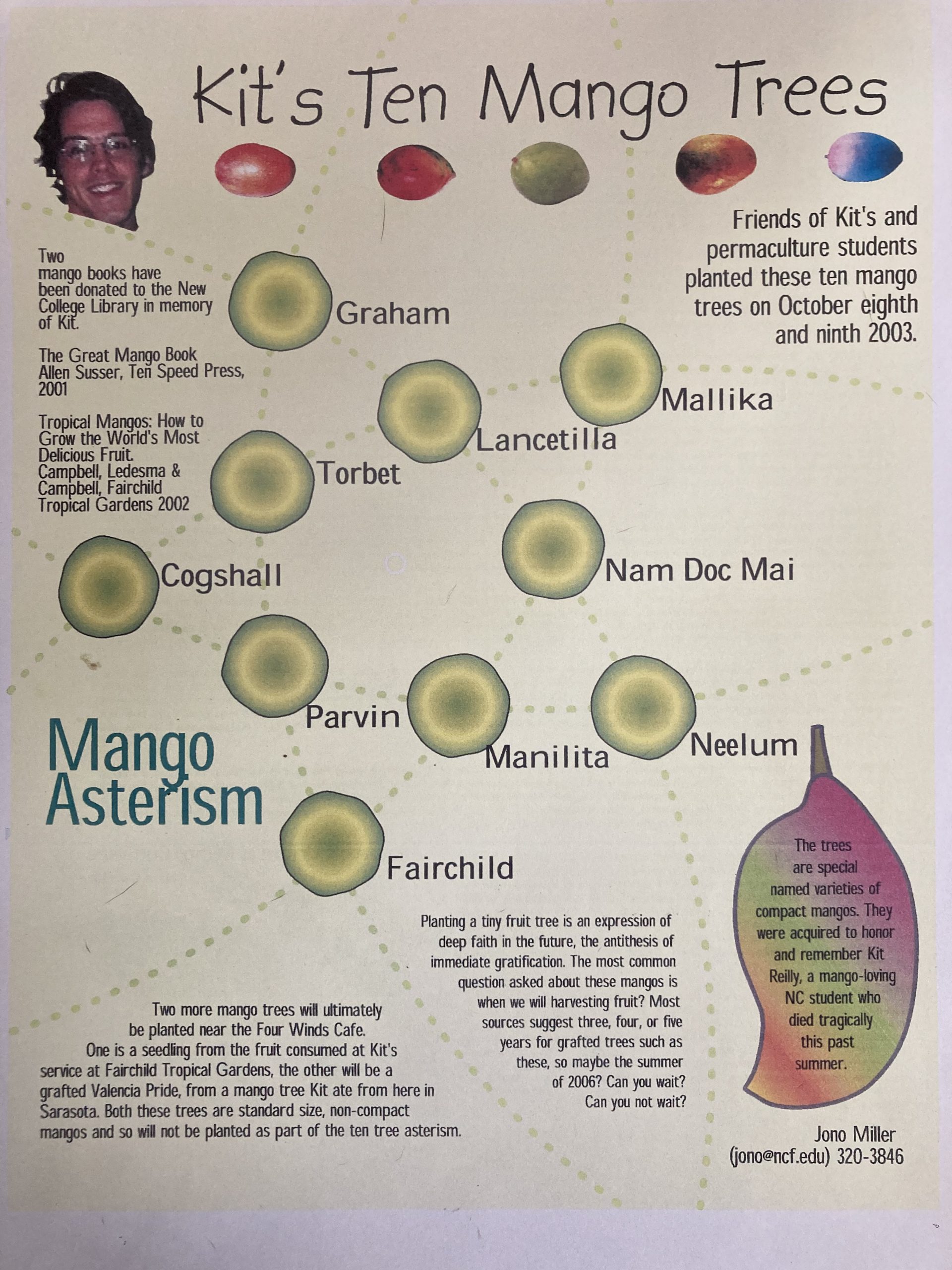 Kristopher Lynn “Kit” Reilly was attending New College at the time of his passing, but he was so much more than just a New College student. He was always an upstanding, present member of his community, and while a memorial in the form of a mango tree grove on campus carries on his legacy, so do Reilly’s family and friends, who keep him in their thoughts often.

Before seeking higher education, Reilly lived in Kauai, Hawaii for a period of time, where he hiked the Nepali coast barefoot and explored Hawaii’s unique landscape while observing the bountiful flora and fauna. Additionally, Reilly also carved out time to travel to Europe.

Reilly spent time at Lewis and Clark College and the University of California (UC), Santa Cruz before being enrolled at New College. According to his mother, artist and painter Jane Reilly, he disliked the life that big schools like these provided for their students. During his stay in Santa Cruz, Reilly taught astronomy to children and helped jumpstart the area’s yellow bike program, which strives to promote alternative methods of transportation that are more sustainable than driving cars. When Reilly decided to go back to school following his tenure at UC Santa Cruz, he decided to select a university with a different philosophy than most.

“At the time, our family had moved from Kansas to Florida,” Jane Reilly shared. “Kit had decided to come back with us to Florida, and he was ready to go back to school. We looked at New College together, and he loved the whole philosophy of New College. He loved that you could do what you wanted.”

While at New, Reilly became fully immersed in the school’s campus life and culture, getting very involved with his close knit group of friends, enjoying life’s simplest gifts such as writing poetry and making music with his community.

“He became very involved with his friends,” Jane Reilly said. “They were an extraordinary group of creative and intellectual minds. They experienced life like no one else.”

Reilly began his academic career at New with an area of concentration (AOC) in Political Science, but later swapped to a Physics AOC after realizing he truly loved the subject. Years later, with one semester left to graduate, Reilly applied for a summer astronomy internship program at the Arecibo Observatory in Puerto Rico.

“He was accepted and chosen to work with two professional astrophysicists, who were just so impressed with him,” Jane Reilly explained. “He was with a group of kids who were with the same program, but a different group than his. While on a hike, Kit and [another student] Mike disappeared. They were found later in a cave underneath a waterfall. Whether he drowned, or hit his head on a rock, we’ll never know. In my opinion, Kit died while saving Mike, because that’s just who he was.”

Reilly passed away on June 21, 2003, at 24 years old. Following his death, it was plain to see how much he impacted the people and the world around him everyday, in every moment of his life.

“[His friends] wrote so much about Kit,” Jane Reilly said. “They wrote songs about him. He was such an influence on his friends’ lives and ours. After he died, his friends became my friends. We were all so touched by him and his life.”

Examples of these songs include those composed by Reilly’s former girlfriend, Heather Normandale (‘04), such as Into It All and In Memory.

“Kit was a fabulous human, overflowing with admirable qualities that we all loved and couldn’t believe that he left us so quickly,” Normandale said. “It was such an unbelievable shock to lose him to a waterfall, which was such a source of joy, curiosity and adventure for him. I was very touched by that light he emitted.”

“Kit was one of many students I’d gotten to know while working at New College,” alumnus and former Co-Director of the Environmental Studies Program Jono Miller (‘74) said. “We were canoeing in the Everglades during ISP. It was later than ideal when we found a place to camp along a narrow beach. Some people put up tents, others worked on food prep. But we needed firewood and there wasn’t too much washed up. Two people were dispatched to walk up north, and two south in search of fuel. One group came back with armloads of driftwood. The second group [Kit’s group] came back with half as much. When asked why the discrepancy in the amount of fuel, Kit observed that much of the driftwood was too pretty to burn. It no doubt was.”

“Kit was my best friend during our time together at New College,” Peter Dow (‘04) said. “We were housemates, both physics majors and lab partners, and spent much of our time running through neighborhoods harvesting unwanted fruit off trees, at the sailing club, paddling around at the bay or hanging out watching the sunset. He was/is the most positive, loving person I know. In life and in death, he brought people together in a way that to this day feels like magic. The greatest gift by far were the lessons I learned from him about how to laugh, love and live my values. We had so many conversations about what mattered to us and his actions so clearly (and seemingly effortlessly) flowed out of those.”

Beyond the cosmic connection Reilly shared with his family and friends, physical memories of a short life well-lived still remain on the planet. On the bayfront side of campus, by Four Winds, in collaboration with Miller and New College, ten mango trees were planted in the shape of a star as a memorial honoring Reilly.

“The mango trees were a no-brainer,” Jane Reilly said. “There were all these stories of Kit and mangoes and he loved the idea of picking fresh fruit. He would gift and eat mangoes with people all the time. His friends wrote several things about the mangoes and there is a recurrent theme of them in his life.”

Another example of Reilly’s otherworldly presence on Earth is that years after he died, his mother held an art show to raise money for a cause that he would have supported.

“Two or three years after Kit died, I had an idea for an art show to raise money for something Kit would care about,” Jane Reilly said. “I painted 24 mango paintings for it because he died at 24 years old. Honest to God, Kit told me what to paint for them. Things came to me out of nowhere, I’m sure it was Kit.” “I talked to the director of the Fairchild Tropical Botanic Gardens in Miami, and we made it happen,” Jane Reilly continued. “The night of the show, it was a full moon and it was the biggest full moon I’ve ever seen. His friends came and played music for him. Almost all the paintings sold and we raised a lot of money for the Vohibola Project. It was incredible and very healing for us.”

The Vohibola Project is a movement that fights deforestation and protects endangered species in the Vohibola forest in Madagascar, and was organized through the Fairchild Tropical Botanic Gardens.

Reilly’s spirit continues to live on Earth in many ways. He is remembered everyday by his family and friends that spent years with him. He lives on in New College’s heart as the ten mango trees serve as reminders of the kindness and hospitality he radiated. He is survived by the music and poetry that he left behind, as well as all the art that he inspired.