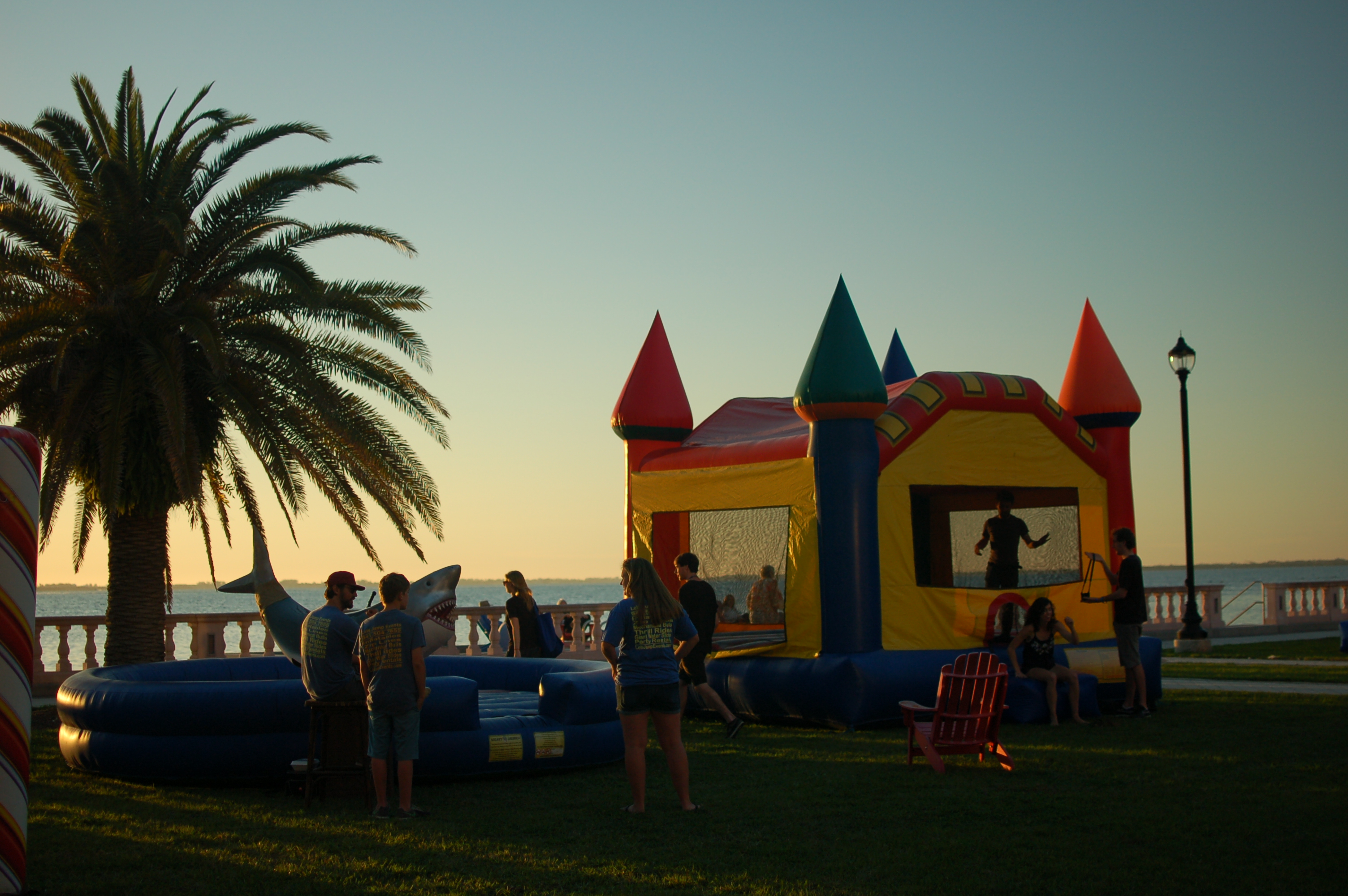 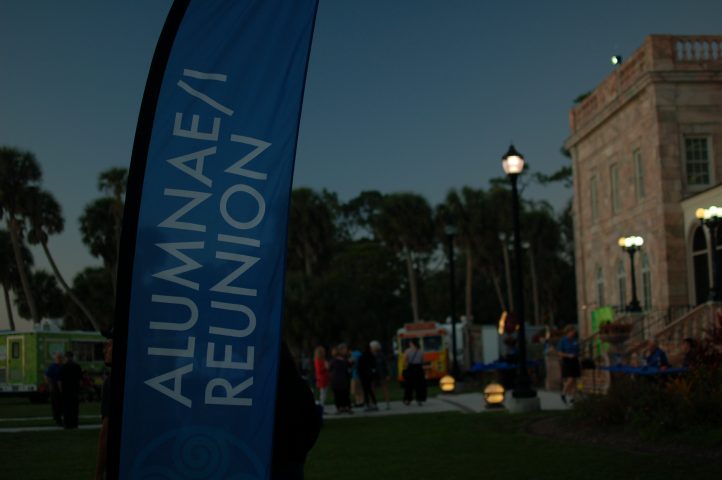 The back porch at Four Winds was packed and not entirely with millennials for once. At the Nostalgia Coffeehouse event for the 2018 alumni reunion, former and current New College denizens of all ages squeezed into a familiar community space and told stories about appendicitis, Tennessee Williams and everything in between.

Waiting in the wings were Yeehaw Junction band members Ben Harth (90’) and Ezra Freeman (90’), both dressed to the nines in regalia from Goodwill: a fluffy white tutu for Harth and a bright floral skirt paired with a child’s hobby horse for Freeman. When Yeehaw Junction climbed onstage to sing about chicken soda and heirloom guitars, several audience members sang along–tribute to the staying power of old friends and good jokes.

Among other unique revivals and revisitings of the weekend was an event held in memory of David Pini (‘64). A former Catalyst contributor, “media maven” and filmographer, writer of several plays and perpetual student, Pini’s 10-year run at New College led to the old Student Executive Committee including him in its definition of a student. From the Catalyst: “For the purpose of student rules, a “student” was defined as one who is a.) in academic residence at the college; or b.) on four-year option from the college; or c.) on academic leave from the college; or d.) a special student; or e.) David Pini.” This special classification was included in an orientation handbook, Leslie Reinherz (‘70) remembered. 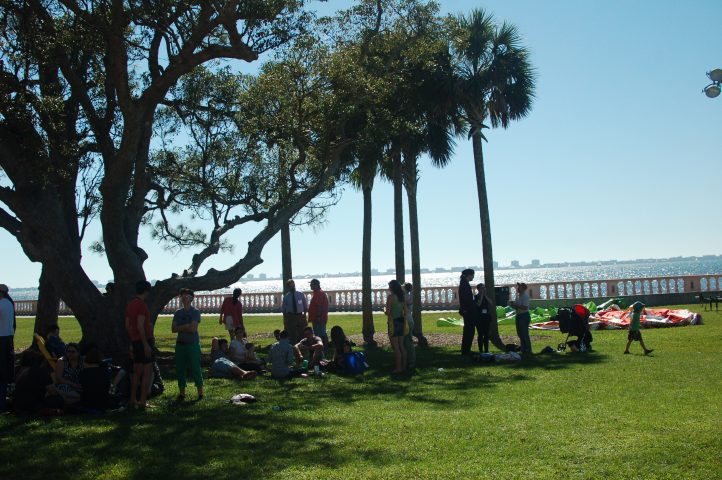 The meeting, consisting mainly of alumni from the 60s and 70s, including an unveiling of a plaque in the Media Center in the library commemorating Pini and a showing of his work in film. Shot on a Super 8 camera and later digitized, the film showed 10 years of New College shenanigans, including aerial footage of a College Hall wedding, students burning and eating their draft cards, and scenes from the summer a “Jesus band” rented out Hamilton Center. To see Pini’s work, search “David Pini” on YouTube.

Beyond the Bubble, a career panel, featured four alumni from different years: Cristin Murphey (‘00), Noah Teitelbaum (‘94), David Silverman (‘70) and Kaitlyn Berger (‘03). Coming from fields ranging from media law to marine biology, the alumni on the panel explained how their careers evolved in processes that they had not foreseen during their undergraduate years. Three of the panel found that their Area of Concentration (AoC) while at New College did not necessarily determine what they did afterwards, although the experience shaped their worldview and sharpened their abilities.

The discussion drew expertise and opinion from members of the audience as well and covered important ground within the topic, including how to maintain a work/life balance relating to spirituality, sanity, systemic injustices and microaggressions that make obtaining or working at jobs harder for marginalized people. 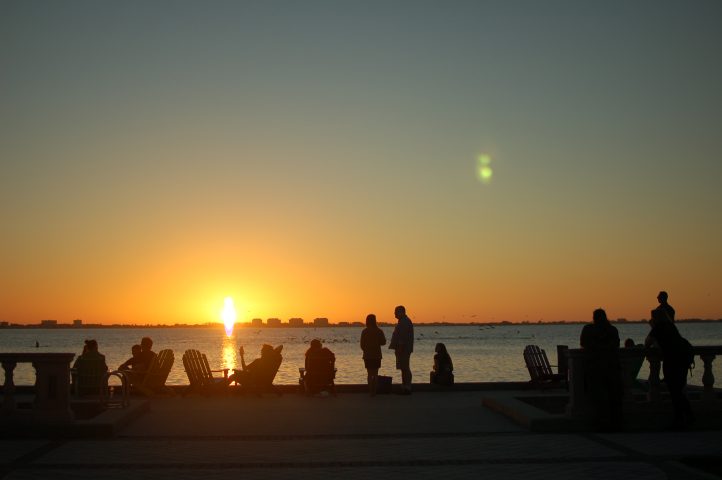 “I mentioned in the beginning the tension between a meaningful career and a meaningful life,” Teitelbaum, a former teacher and current manager of a test prep company, said. “You could have a really lame job and a really great life. When I mentor the New College recent graduated person, I will talk about what do you want to do in general with your time and how does your job fit into that, how you can leave time for this other pursuit, or is this job where you’re going to get all your satisfaction.”

“You always can be working,” Berger, an urban planner and former general studies AoC, said. “You may be at a job where you have to be responsive, but compartmentalizing that, you try and chunk it enough to force that work/life balance and set it up so that you find how you mentally turn off everything.”

On the heteronormative inequalities implicit in parenting and working, oceanographer and marine biologist Murphy said: “I’ve had a lot of women say you can have it all, but not all at once.”

“There are different challenges we face now than the previous generation,” Murphy continued. “We had some trailblazers who took down barriers to entry, and so the barriers right now are much more subtle. They’re still there. Microinequities, microaggressions, there’s just these pervasive things in culture, especially in these fields that have a stereotyping bias and don’t realize that they do. ‘We have women–look, there’s one! There’s a person of color in the back!’”

In addition to discussing how to navigate the workforce, the panelists talked about support and mentoring for recent graduates and current students. While programs at the Center for Opportunity and Engagement (CEO) provide current students with some structure and guidance, those programs didn’t always exist for older cohorts and mentorship has been and remains an important function and goal of the community. 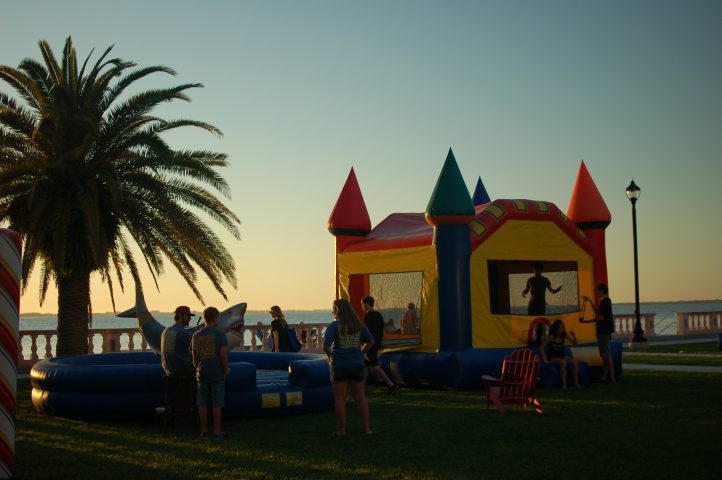 At the Nov-a-Palooza, the bayfront carnival, alumni mingled among food trucks and bounce houses.

The events for the weekend included more than the ones planned by the Alumnae/i Association. Falling the same weekend as the time-travel-themed Valentine’s Palm Court Party (PCP), the reunion also coincided with a wall, Innocent II hosted by thesis student and Tangent reporter Bree Nieves, and a hardcore show at the Bike Shoppe organized by thesis student Hana Arraya and showcasing local bands Unified Right and Z.A.P. Both events drew crowds, and Arraya presented alumni with a hand drawn map of campus to clarify where the Bike Shoppe is, as certain features of the campus have changed over time. (“What is a hardcore show?” some older alumni wondered.)

Working over the past year-and-a-half, the Alumnae/i Association, especially board members Leslie Reinherz (‘70) and Ginger Lyons, planned the reunion in conjunction with most of the departments of the college. The reunion was tentatively scheduled for the anticipated weekend of Valentine’s PCP. Students set the exact date of PCP and Saturday, Feb. 17 won with 39 percent of the vote, fitting perfectly into the weekend plans. While reunions are often centered around particular cohorts of New College students, the aim of the 2018 reunion was to draw current students and alumni of all years together.

“We really wanted to change the nature of reunions,” Leslie Reinherz (‘70), board member of the Alumnae/i Association and one of the event planners for the reunion, said. “What had happened was there was the big [50th anniversary] reunion, I had gone to that and it had been such an amazing event for the people who came. It really made you feel like the entire community was coming together. It wasn’t just a few years of people having their own little reunion and I really felt when I came on the board three years ago that we wanted that again.” 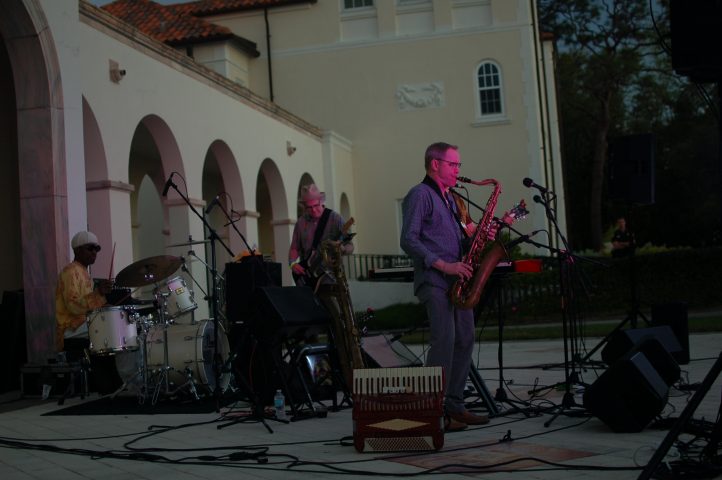 At one point, the planners targeted reunions at smaller ranges of cohorts, sometimes resulting in events where only 30 people arrived. One year, so few people showed up that the reunion was canceled.

Lily Wohl (‘11), who also helped plan the reunion, estimated that roughly 400 people–likely including guests and children of alumni–had registered for the reunion by the Wednesday before. Alumni registered online and picked up wristbands at the Keating Center before meandering through a selection of events, such as kickball and dodgeball games, yoga by the bay in the mornings, musical events with alumni performers Heather Normandale (‘00) and Paul Cebar (‘75), academic talks by several faculty members on topics ranging from the Nietzche to entomology, the bayfront carnival Nov-a-Palooza and a Towne Meeting with New College President Donal O’Shea. 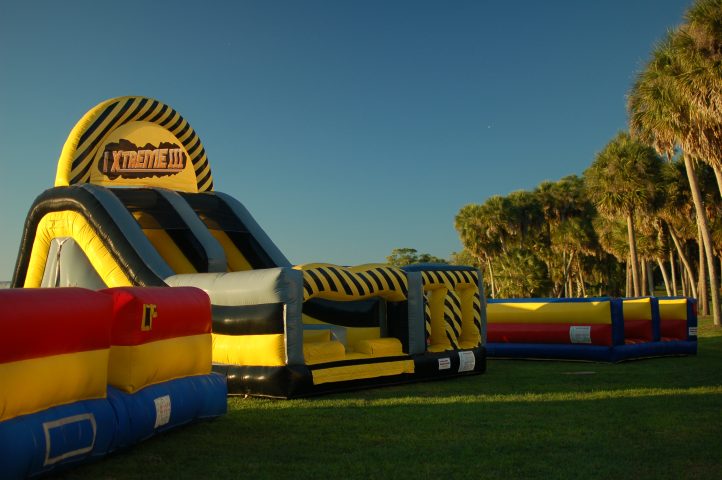 Student and faculty wristbands cost five dollars, which helped organizers obtain a more accurate headcount and helped offset the cost of the events. The cost of the reunion was not covered entirely by ticket and wristband sales and other funding came from the Foundation. A few students contacted the Alumnae/i Association for waived wristband fees due to need and were able to reach solutions.