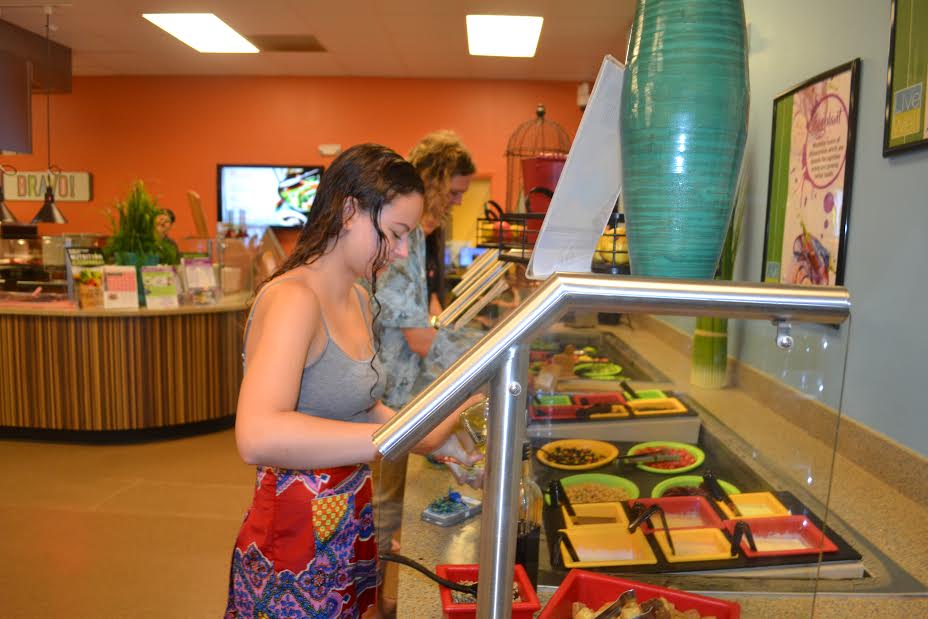 Students Evan Teal and Sarah Darancou get food from the salad bar in Hamilton Center, circa 2017. (Photos by Michala Head)

Access to food is a serious topic, especially at New College. Without a car, getting groceries is practically impossible without a friend to drive you or the money to spend on delivery services. The on-campus mandatory meal plan has garnered considerable criticism, and the limited hours hinder students with jobs, or simply a great deal of responsibilities. Despite this year’s increased hours, getting dinner between 4:30 p.m. and 7 p.m. is not always easy. What is easy, is missing one or more of the periods that the Hamilton “Ham” Center is open. The Food Pantry and Food Forest provide some relief, but are not perfect solutions to a much larger problem—one concerning, primarily, the city of Sarasota itself.

Worse yet, the vast majority of this score is from the “culture and entertainment” category.

The precise data that the above bar graph shows are listed below:

The mean of the above percentages is ~29.63%, not 25, so the calculation of walkability is either non-linear, or weighs certain categories. The specifics are patented and unknown. Whatever the case, this research-backed data shows that, without a car, grocery shopping is practically impossible. Even with a bike, the limits of what can be carried are highly restrictive.

A quick google search reveals many schools have some sort of grocery shuttle, including the University of Central Florida (UCF), Wesleyan University, Boston College, Yale, and Rutgers. These schools are either very large or have relatively minor budget restrictions compared to New College. However, small schools, such as Pepperdine University, High Point University and Trinity University also have grocery shuttles. These are private universities, though. Despite this, there exists at least one public university with fewer than 1,400 students (itself a difficult feat) that has a grocery shuttle: Dominican University. With this in mind, New College of Florida having a grocery shuttle makes a great deal of sense.

While not starving to death is an easy task at New College, the options available to students without automotive transport are limited to Ham, the Food Forest, and the Food Pantry. While the latter two are wonderful products of the school’s student body, the Food Forest is located at the relatively isolated Caples Campus, a 20-minute walk from the Nook. And the Food Pantry does not solve the issue of a complete lack of agency in food choice available to students who cannot afford food delivery every day. This is especially bad for those with dietary restrictions.

Third-year student Aurlie Campbell has thankfully started an initiative to start a grocery shuttle here at New College. She and third-year Lauren David are currently workshopping the project.

“By hearing from and listening to students, we may be hearing things we’re not thinking [of],” David added.

David said that ideally, perhaps in the future, the shuttle would be provided by New College, but they are currently looking for student volunteers.

They hope to “bridge that gap between Ham and people still being hungry,” David said. She also mentioned concerns that the Food Pantry is exploited, specifically by people who go immediately after it is restocked. The real issue, however, transcends the Food Pantry.

“I had experiences with feeling hungry at New College despite having a meal plan,” Campbell said of her inspiration. “Then I took a food policy course during an exchange semester, which talked about the diverse ways to meet food security needs.”

Moreover, the college Campbell visited had a grocery shuttle for students, so “I was able to experience first hand how easy and accessible getting groceries could be.”

The duo elaborated on their concerns with the issue of food apartheid in Sarasota.

“When comparing communities with similar poverty rates, Black and Latino neighborhoods tend to have fewer supermarkets that offer a variety of produce and healthy foods, and have more small retail (i.e. convenience and liquor) stores that have fewer produce options than in predominantly white neighborhoods,” according to the Natural Resources Defense Council (NRDC). There are also food mirages, “places to buy food, but that are too expensive for the neighborhood.”

The last focus group took place on May 4, and the initiative and its proponents are excited to move forward into the next semester.