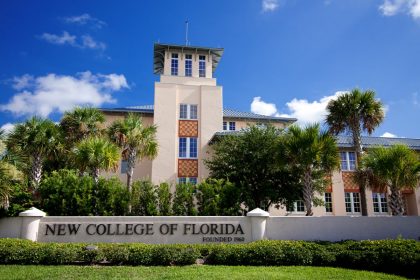 The hope of the EPC is that these recent changes will reduce anxiety for new, incoming students and by having them cement their class schedules earlier in the semester.

Pending administrative approval, students will be able to request a GPA calculation for job applications

Over the past academic year, the Educational Policy Committee (EPC) has developed a proposal on GPA proxy calculation in order to tackle graduate school applications, employment and internship listings that require a GPA number for consideration. The EPC brought their proposal to the May 12 faculty meeting, flanked by amendment proposals made by Director of Academic Initiatives Frank Alcock, as well as New College Student Alliance (NCSA) president Sofia Lombardi. Lombardi’s amendment passed with a 49-11 vote, and the final amended version of the GPA proxy proposal passed with a 39-23 vote.

New College’s narrative evaluation system gives students qualitative feedback instead of quantitative grades. Some jobs and scholarship applications require a GPA, but students can often skirt around the requirement by simply entering a 4.0 into the system to avoid automatic disqualification, as well as by sending a letter from the Registrar’s office that explains the college’s narrative evaluations. However, certain job applications insist that an accurate GPA be calculated.

Alcock estimated that approximately 20 students applied to jobs and programs that insisted on a GPA calculation, which the Center for Career Engagement and Opportunity (CEO)— in tandem with the provost’s office and the student’s professors—calculated on an ad-hoc basis. The GPA proxy was proposed to simplify this process and provide a number for all students to enter in job applications.

The original EPC proposal had the goal of meeting two requirements, as explained by Chair of the EPC Aron Edidin during the faculty meeting: to “expand opportunities for our students by providing, where necessary, a number to put in the ‘GPA’ slot in applications that require such a number,” and to simultaneously “protect an academic system predicated on substantial written evaluation of students rather than grade-based evaluation.”

“We worked really hard to achieve the first goal in a way which would, as clearly as possible and as fully as possible, achieve the second goal,” Edidin elaborated. “The result is not a GPA which would require an average of grades—which would then require a grade-based evaluating system—but a way of interfacing our non-graded evaluation system with applications that can’t go forward without a number. It is in that spirit that we make our proposal.”

Edidin continued to say that the final section of the proposal states that when the GPA proxy is communicated to anyone outside of New College, it will still come with an explanation of the written evaluation system and how the GPA proxy is calculated for specific situations where it is required. Edidin also said that the EPC anticipated that the GPA proxy system would be used primarily for employment and not graduate applications.

“This is the device for getting someone’s foot in a door that would be closed if there weren’t a number,” Edidin said. “This isn’t the sales pitch. The sales pitch is the recommendations, the narrative evaluations, the real academic record that a student has put together. None of that goes away.”

“I understand the foot in the door [idea], but if the foot in the door is a system that everybody recognizes as really not rigorous or distinguishing among our students, it’s going to lower our reputation,” Professor Barbara Hicks, who is also the chair of the social sciences division, said.

The proposal’s critics were primarily worried about what a GPA proxy meant for New College culture. Professor of Mathematics Patrick McDonald cautioned that it could potentially be a slippery slope leading to grade-centric student environment.

“I think, with high probability, it’s going to change our culture,” McDonald said. “Part of the reason I think that’s true is because we have grades in the graduate program, and we have New College students who move into the graduate program. What we see is that they immediately begin to worry about grades. It’s what you would expect given that they spent their childhood being conditioned to worry about grades.”

However, the amendment proposed by Lombardi sought to narrow the circumstances under which students could request the GPA proxy.

“In speaking with some of my peers and cabinet, we were really concerned about this creating a GPA culture,” Lombardi said while explaining the amendment. “About students requesting it on a very regular basis, when they weren’t just needing it for an application, and about creating that stress that we’ve all come from in high school.”

The amendment states that the original proposed system could potentially “endanger the college’s academic program” by allowing GPA proxies to be given out under any circumstance or by establishing GPA proxies as the greater indicator of academic success over narrative evaluations. To rectify this, the amendment proposes that students only request a GPA proxy calculation if it is required of the application process they are pursuing, or if they were unable to request a waiver for the GPA requirement.

“I think that this is consistent with the spirit of the EPC’s motion, it just puts a little more procedural guidelines in that this will only be generated when there’s a demonstrated need,” Chair of the Faculty David Harvey said about Lombardi’s amendment.

The proposal is contingent on determination from the college administration on whether the GPA proxy would be used for financial aid or other regulatory purposes. Harvey also said at the end of the faculty meeting that the proposal could be revisited in the future if the need arises.