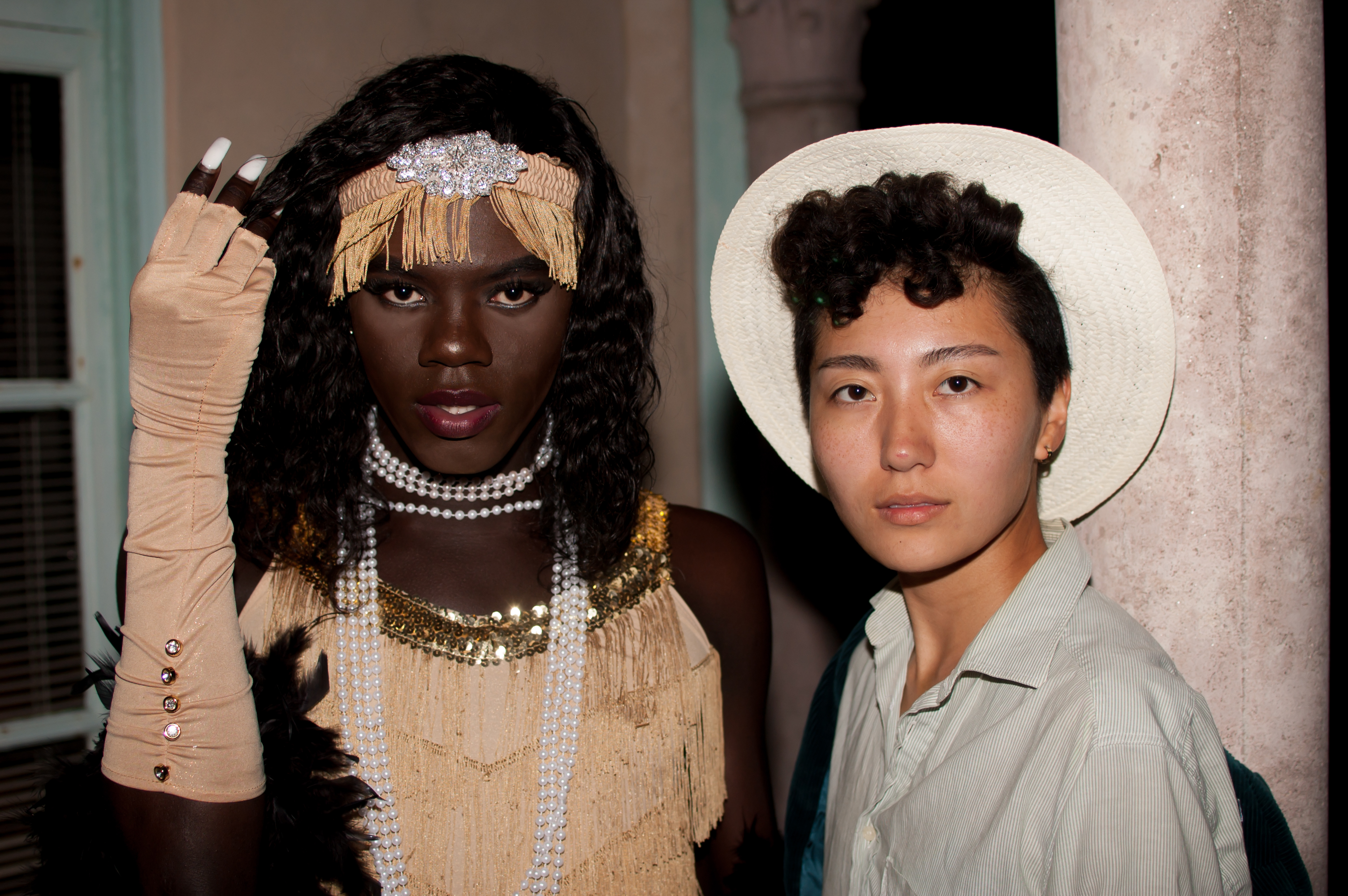 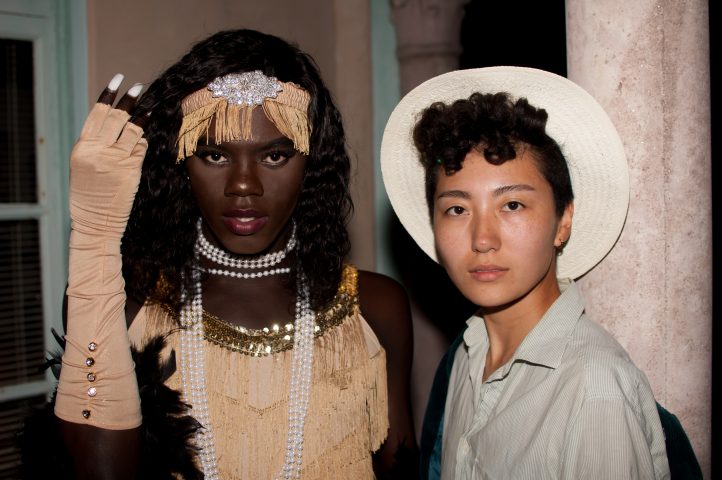 No matter their area of concentration, many denizens of New College read F. Scott Fitzgerald’s famous novel, The Great Gatsby, in high school or watched the 2013 film version with Leonardo DiCaprio as the titular character. For some, this classic may have been a beloved cornerstone of their literary development. For others, memories of the plot, characters and underlying theme might be fuzzy. At this year’s Gatsby party, where friends and enemies alike gather at the old Caples mansion to dance to jazz and show off their 20s fashion sense, the Tangent investigated one detail in particular: how do students interpret this famous novel?

“The American dream is a lie,” third-year Araya Barnes said. “That’s it.”

“There were too many green lights across the bay and I wasn’t sure which one to stare at, so I stayed on our shore and stared at the massive bowl of green guacamole instead,” Harrison said, portraying Gatsby’s internal struggle. “I found my one true love that night swimming in that bowl.”

Other students had more convoluted memories of the novel.

“This rich dude seduces ‘young sport’ with his money,” alum James Montgomery (‘13) recalled. “And then he meets Gatsby and becomes an old sport.”

“Isn’t it about Gatsby being pissed off that he can’t have that one girl?” third-year and New Cats member Jose Uribe inquired, pulling out his phone. “But she’s already married but then was cheating with some other guy… Here, I’ll just look it up.”

“But it’s kind of like playing chicken with getting into a serious relationship,” Montgomery added. “And there’s this green light at the end of his dock and it symbolizes his dick or something, right?”

No one was quite sure about this seemingly Freudian connection.

“This is all in the movie, I’m not really sure how it happened in the book,” Montgomery admitted. “I never read the book.”

Over the Forum, alum Lawrence T. Levine gave the elevator pitch more concisely than most.

“Rich guy wants the girl back but the husband of the mistresses of the girl’s husband kills him instead.”

For those who haven’t read The Great Gatsby, the plot goes a little something like this. Spoilers should obviously be expected.

Nick Carraway, veteran of the Great War, Yale graduate, wannabe journalist and eventual finance bro, moves into a nice house right next to the mysterious and rich Jay Gatsby’s much nicer house, where he often throws lavish parties. At one of the said lavish parties, Gatsby–played by Leonardo DiCaprio in most of our imaginations–takes a liking to Nick, or as he’s known in the book, “old sport.” Gatsby is still in love with his old flame, Daisy Buchanan, who is married to Tom, who is cheating on her with Myrtle. Using his newfound connection with Nick and his conveniently located parties (across the bay from Daisy’s house) to present himself as a changed and much more appealing suitor to Daisy, Gatsby reforges his connection with Daisy and they start an affair. At some point, Tom figures all of this out and manipulates everyone into greater unhappiness by claiming to Gatsby that he and Daisy have a deep history, and notifying Daisy that Gatsby made his money as a bootlegger. When Daisy and Gatsby are en route to Gatsby’s house, Gatsby’s car strikes and kills Myrtle, Tom’s mistress. Myrtle’s husband, led to believe by Tom that Gatsby is Myrtle’s undercover lover, murders Gatsby. Having been a bystander for most of the novel, this event shakes Nick, who denounces the east coast and reclaims his midwestern lifestyle.

As demonstrated, the Gatsby party generally doesn’t tend toward high quality critical analysis. Generally, students tend to focus on their friends, rather than literary undertones. Few walls feel nearly as grand as the Gatsby party generally does: in addition to the dramatic setting of the Caples mansion, the glittery decorations and the presence of the New Cats, it’s rare for a wall to attract such a large crowd of well-dressed New College students. Strangely enough, many wore shoes.

This year, Lucille Sanz, Camila Vallejo and Maya Holt-Teza organized the beloved tradition at Caples. With a budget of $300 from the Student Allocations Committee (SAC), they decorated with string lights, electric tea lights and a golden photo backdrop at one end of the patio. Balloons hung over the New Cats’ heads. On the lawn, there was a table with snacks and drinks: chocolate covered strawberries, crackers and drinks served in plastic champagne glasses for the thirsty dancers.

Of course, many students came to see their friends play in the New Cats.

Third-year Jose Uribe, saxophone and flute player, explained some of what goes into preparing the band for an event like Gatsby.

“It’s very laid back, it’s not a super strict sort of practice thing,” Uribe said. “I usually make a couple announcements about what we’re going to practice.”

Like many student organizations, the New Cats occasionally suffer from a lack of institutional memory. However, the past few years have been particularly strong, with many talented musicians.

“Everyone is charismatic and everyone is enthusiastic and we finally have a dedicated singer, which is really important,” Uribe explained. “Shout out to Cat [Chapman, who went to New College her first year and now goes to the University of Tampa], who drives from Tampa. The fact that she drives an hour to show up to practice is something special.

“It’s a very dedicated group and probably the best part about this group is that there’s only three people in the band who are seniors in the band, so it’s me and Kevin [Howlett] and Colin [Mulligan], and the other six of us are new to the band,” Uribe continued. “Which means that when we leave, you still have a full-fledged band that still kind of understands what the New Cats are about.”

At the end of the academic year, the Gatsby party allows students to kick back, dance until they’re dead tired and hang out with friends new and old by the bay. It’s a night to remember, but a night that passes quickly as finals approach, school winds down and students look toward the future for a summer of internships or jobs. And whether this is one’s first Gatsby party or one’s last, F. Scott Fitzgerald’s parting words ring poignantly: “So we beat on, boats against the current, borne back ceaselessly into the past.”