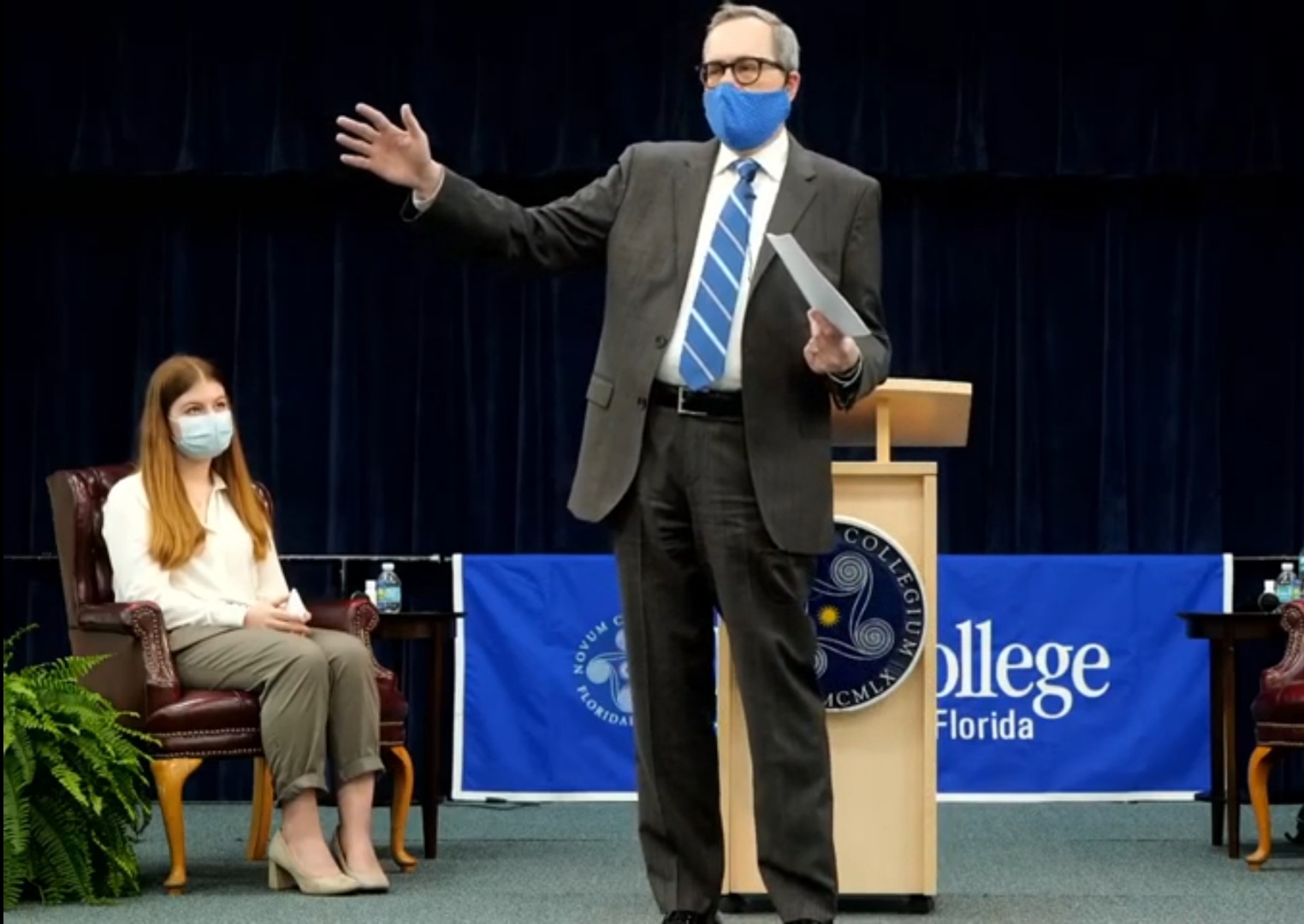 Sosulski gestures as NCSA President Sofia Lombardi looks on at the livestreamed student forum at the Sudakoff Conference Center.

On April 7 at 4:58 p.m., presidential candidate Dr. Michael Sosulski was not sitting on stage at the Sudakoff Conference Center, waiting to give his mini class presentation, but was instead in the audience chatting with the handful of students present. Three minutes into his 20 minute presentation proceeding the student Q&A, he moved out from behind the podium to instead speak directly to students, calling on some by name. The fourth presidential candidate opened his first in-person interview by asking students what they thought liberal arts is about, and with this emphasized forming relationships with students and faculty and an extensive liberal arts background as cornerstones of his candidacy.

Liberal Arts in the 21st Century

Sosulski is currently the Provost and Professor of German at Wofford College and was previously the associate provost at Kalamazoo College, both private liberal arts institutions.

“I have had the privilege of serving in several top 100 liberal arts colleges throughout my career,” Sosulski said during the in-person meeting with faculty and staff on April 8. “All of them bring value in their own way, but one of the things they all struggle with is what makes them distinctive. New College has the advantage of already knowing what makes it distinctive.”

His earliest work experience in higher education, as listed on his CV, was as the assistant director of student housing at the University of Chicago.

“[Working in resident life] taught me how important life is to students outside the classroom, how important curating a great set of extra and co-curricular activities is for a vibrant college life,” Sosulski said at the student Q&A. “I think I bring a deep understanding of the academic program in a top-100 liberal arts way, and also of the extracurricular, co-curricular, resident life and student affairs program.”

Sosulski also taught a class on German literature as provost at Wofford this fall semester in what he described as a “moral imperative.” Since Wofford had an initiative this fall to be as in-person as possible, Sosulski said that if he was going to ask his faculty to teach in person, “I had darn well be ready to do it myself.”

During Sosulski’s mini class presentation, “Liberal Arts in the 21st Century,” he explained that we are currently in the middle of the fourth industrial revolution, defined by the World Economic Forum as the rapid “embedding of technology in the physical and biological world” and cited the mouse embryo grown in an artificial womb last month at the Weizmann Institute of Science in Israel as an example.

“In a world filled with fast-paced technological change, I’m going to argue that the liberal arts are more necessary than they have ever been before,” Sosulski continued. “We can’t all be supply chain managers, we can’t all be biotech engineers, but we can be people who care about what this rapid pace of change means for our fellow human beings. We need liberally-trained people who understand ethics, who understand human psychology, who understand the social policy of change like that and can make sure through all of this, we find a way to stay human.”

Sosulski said during the meeting with faculty and staff that he has known about New College “for a long time,” and that one thing he would change about NCF if he could would be to have more students graduate in four years.

“As much as I love New College, you shouldn’t want to stay here for five years,” Sosulski said.

He continued to say that the primary method to ensure students reach this goal is to have a financial aid policy that properly sustains them throughout all four years. While Sosulski said that New College’s distinctive features—including the contract system, narrative evaluations, the undergraduate thesis and Independent Study Projects (ISP)—were its biggest strengths, the institution’s biggest weakness was needing better systems to navigate these processes and support students throughout them.

“I would want to learn everything I possibly could about the financial aid policy, how it’s distributed, and how it’s applied to make sure we are keeping students afloat as best as we possibly can,” Sosulski said.

Some other potential solutions Sosulski cited were foundation giving and need-based instead of merit-based scholarships. He also stressed alum engagement with current cohorts to let recent graduates to stay connected to the community, and said that a similar mentorship program had recently been installed at Wofford.

Additionally, Sosulski was also dean of the sophomore class during his time at Kalamazoo, and said that this gave him the insight that while the first and fourth year of college tend to be “robust experiences,” there is less structure and support during the second and third year. Sosulski believes that by providing specific support for each year of college—such as designating the second year as characterized by community interaction and the third year as characterized by studying abroad—NCF can “create articulated pathways to graduation” and improve student retention.

In terms of enrollment, Sosulski said that it all comes back to increasing application numbers, which should come about when resources are funneled to admissions, financial aid and marketing. Sosulski has worked with consultants before at Wofford on their financial aid policy which he said has increased applications, but he also recommended refreshing New College’s website and trying to appeal more strongly to the local community.

When asked about fundraising efforts, Sosulski said that it ultimately comes down to “telling stories about student success.” From there, he shared his own story at the student Q&A about a $300,000 mini-campaign Wofford launched this academic year in order to refurbish a chemistry lab to make it more accessible to students, which they recently completed.

However, when it comes to legislative challenges, Sosulski admitted that his prior experience with predominantly private liberal arts institutions means that he would need to “grow in this area,” but he anticipates receiving aid from the Board of Trustees (BOT). He said that the “real question” is how to frame NCF’s value to legislators who are thinking with a “one size fits all” approach and referenced last year’s Senate Bill 86 several times as an example of the gap between NCF and Florida legislator’s understanding of liberal arts and higher education.

When it comes to the recent $4 million donation gifted to New College, Sosulski said that he would want to allocate those funds towards need-based scholarships and student success initiatives. He also supports the revitalization of Four Winds and wants to have more frequent Town Hall meetings over Zoom so more people can participate if he is elected, as increased Town Hall meetings have been a recent initiative at Wofford. Sosulski added that he has also wanted to start a student-run coffee shop there for some time.

“I want to make sure that whatever happens at the institution does not fundamentally change the nature of four-year residential liberal arts experience for students,” Sosulski said.

When it comes to police relations, Sosulski stressed the importance of creating a space where student feedback can be safely given. When asked about whether he would support decreased police presence on campus, he said that there needs to be a balance between making sure students feel safe and still maintaining some modicum of campus security.

“The folks in campus safety want to do a good job,” Sosulski said. “It’s really about finding a meeting of the minds about what that actually looks like.”

Sosulski also offered his strong support for Title IX services on campus, and said that he has had experience advocating for students in the past at Kalamazoo College

“We cannot have processes that retraumatize survivors and we need to ensure that everyone involved in the process is treated with the dignity and the respect that they deserve,” Sosulski said. “It’s a big challenge for institutions, but we have to put the resources and the time into getting those things right.”

During the meeting with faculty and staff, Sosulski also said he was in favor of faculty unions, opposed staff cuts—particularly in student affairs—and was in favor of strengthening the graduate-level programs, but only if it were left in the hands of the faculty. Instead of administration creating a new program and hiring new faculty as a result, Sosulski instead said that new programs should come organically from preexisting faculty.

“[The role of the president is] setting the conditions for community conversation that allows differences to be entertained and trying to hold the space for creative conversations,” Sosulski said. “And then, letting them be taken by members of the community. Maybe the Provost, maybe a faculty chair, maybe a department or maybe a staff unit that then the president can help to support, espouse and find resources to let flourish.”

Sosulski finished his faculty and staff interview by sharing what he felt New College would look like after five years if he were to be elected—a “larger and more vibrant” student, faculty and staff population, an 80% to 90% four-year graduation rate and improved student retention.

“It will be a place where big ideas and big debates flourish,” Sosulski concluded. “Higher education is that space where we don’t shy away from controversy. We’re not afraid to approach controversial subjects and we’re not afraid to approach things from different perspectives. That’s all in the great New College tradition, and that’s a value we must continue to uphold and allow to thrive.”