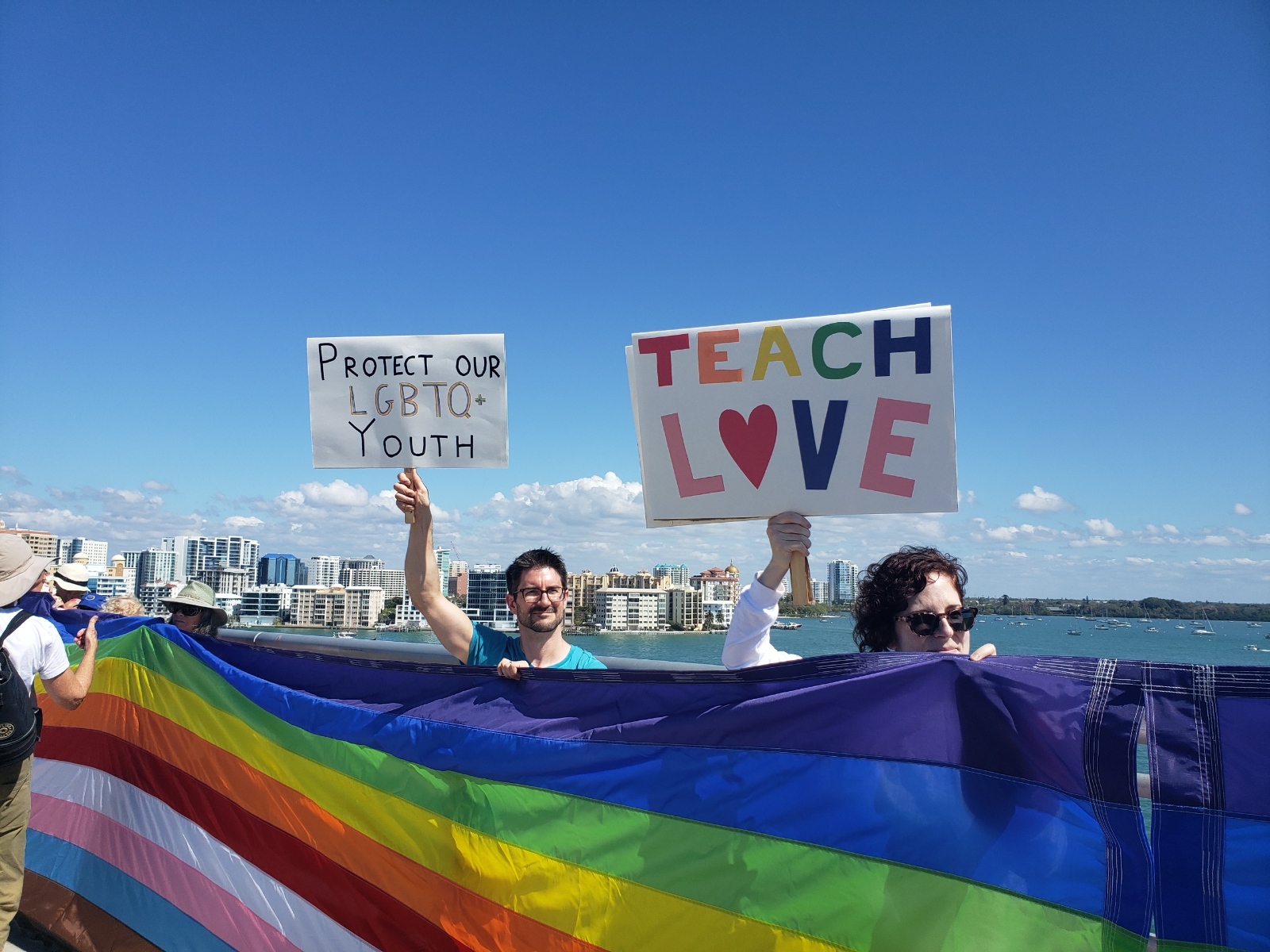 Sarasota's protest against the "Don't Say Gay" bill on Feb. 27, where participators marched across the John Ringling Bridge.

On Mar. 8, the “Don’t Say Gay Bill” passed the Florida Senate, sending it on its way to the governor’s desk. Gov. Ron DeSantis is expected to sign the bill, and if he does, it will go into effect on July 1. The bill “would ban any instruction on sexual orientation or gender identity for elementray, middle and high school students, and would ban conversations about the topics altogether in classrooms at third grade and below,” according to a previous Catalyst article.

The bill has a net -9 unfavorable opinion according to a poll by the University of North Florida. This unfavorability has been reflected in the actions of students across Florida, who have staged school walkouts in response to the bill.

“More than 500 students participated in a massive walkout Monday [Mar. 7] at Winter Park High School in Orange County, Florida, in protest of the ‘Don’t Say Gay’ bill” according to CNN.

In South Florida, there were walkouts at MAST Academy in Miami and Pembroke Pines Charter High School on Thursday, Mar. 9, according to WLPG Local 10. NBCNews reported walkouts on Mar. 3 “across the state — in Tampa, Orlando, Tallahassee and other cities,” naming schools such as Flagler Palm Coast High School, where Jack Petocz, who NBCnews said helped organize the protests online, attends. Petocz was also reportedly suspended for his actions.The Advocate reported that the following graphic was used to spread awareness of the walkouts in late February and was created by Petocz.

LGBT magazine, them., reported that “In Tallahassee, some students marched on the Florida State Capitol building itself, holding rainbow flags and signs with slogans like ‘Say Gay’ and ‘My Existence Will Not Be Taboo.’”

The magazine also reported, “‘We as students need to stand up for each other,’ said Dariel Cruz Rodriguez, a member of the Colonial High School student council in Orlando who helped organize his own school’s walkout, in a statement to The Advocate. ‘No matter our age, we are still a group of committed people who want to be heard.’” The Mar. 3 protests reached Sarasota, where at Riverside High School students chanted, “No homophobes. No KKK. No fascist USA,” also according to The Advocate.

Pushback against the bill has led to criticism of Walt Disney Studios, a giant in Florida and “a powerful—but quiet—political force in the Sunshine State,” according to Politico.

“In recent days, Disney employees shared their outrage on social media when the company did not denounce the proposed legislation,” NPR reported on Mar. 10.

“Chapek said that he called Florida Gov. Ron DeSantis Wednesday morning, ‘to express our disappointment and concern that if the legislation becomes law, it could be used to unfairly target gay, lesbian, non-binary and transgender kids and families,’” NPR reported. “Chapek says DeSantis has agreed to meet with him and some of Disney’s LGBTQ+ employees to hear their concerns.”

However, this opposition came only after protests. “In the last two years, Disney has donated $249,126 to members of the Florida legislature that voted for the “Don’t Say Gay” legislation and $50,000 to Florida Governor Ron DeSantis (R),” according to the accountability news site Popular Information.