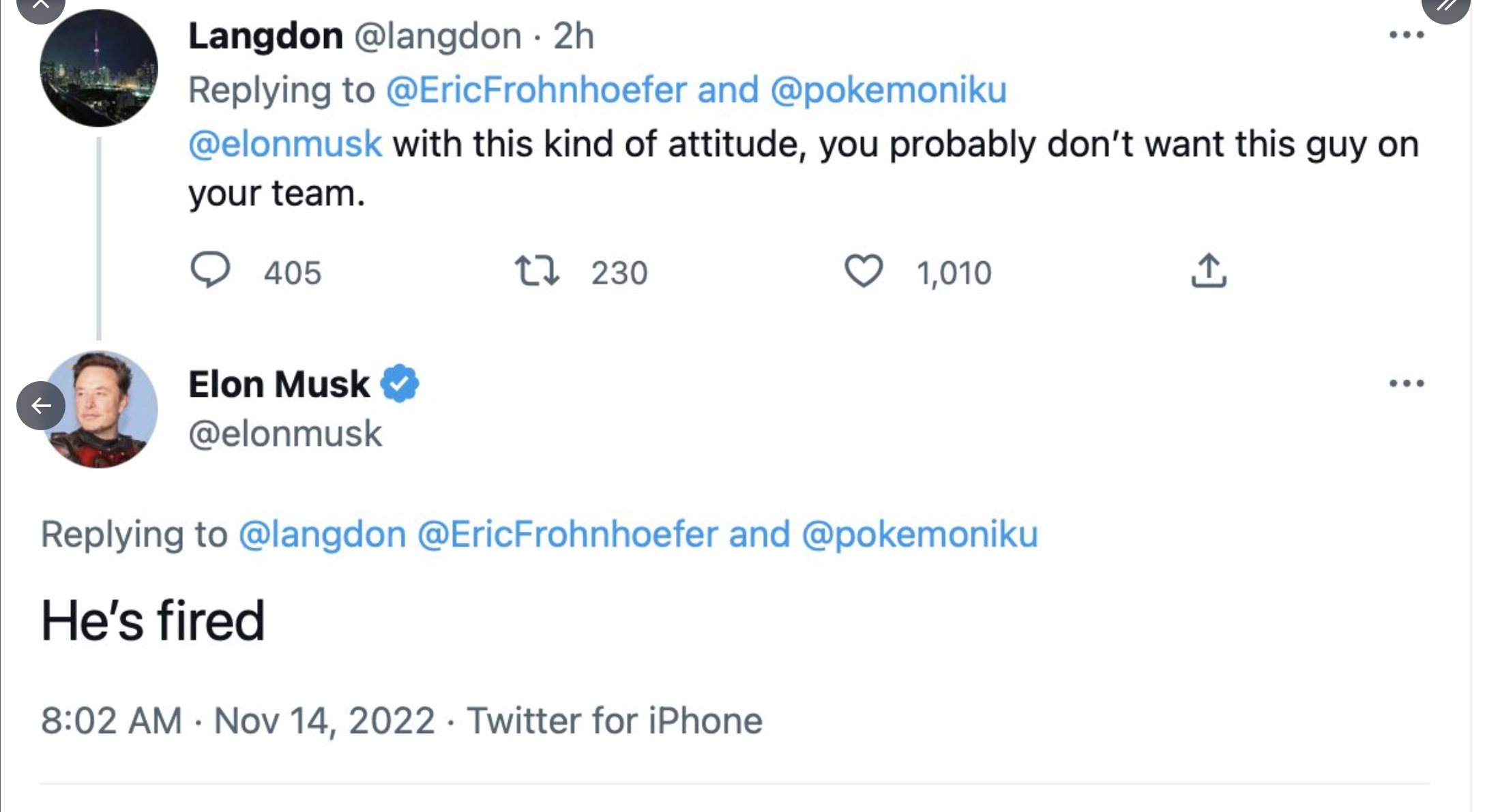 Elon Musk's since-deleted Tweet, firing one of his employees.

On Apr. 4 2022, Chief Executive Officer (CEO) of Tesla and SpaceX Elon Musk revealed that he was social media giant Twitter’s largest shareholder, with a 9% stake in the company, equivalent to about 73.5 million shares. On that same day, Twitter agreed to appoint Musk to its Board of Directors. Musk even received the seal of approval from then-Twitter CEO Parag Agrawal. A business week later, Musk rejected the offer of a seat on the board. Four days after his rejection, Musk made a bid to purchase Twitter at $54.20 a share, an offer equivalent to nearly $44 billion. After much drama and spectacle, the historic deal went through and Musk became a born-again CEO: this time of one of the largest platforms for information and free speech in the world. Nearly every day since Musk has owned the company, he has found himself in the headlines for one reason or another; including mass firings, loss of revenue and Musk’s controversial views on content moderation.

Making a splash as soon as he helmed the ship, Musk’s first order of business was to terminate almost half of Twitter’s workforce. Spanning several departments across the tech conglomerate, in total about 3,700 jobs were lost as a result. Reasons for termination varied, including but not limited to: layoffs, criticisms of the CEO in private Slack chats and simple arguments over business operations over Twitter.

An employee even claimed that he never received a formal notice of termination, but rather learned of his loss of work through a tweet from Musk that simply read, “He’s fired.” Approximately a few days after stating this on Nov. 14, Musk deleted the tweet.

Following the aftermath of the massive terminations, employees still aren’t enjoying job security: they are still at risk of being fired if they can’t work under Musk’s “hardcore conditions and follow his mission to build a breakthrough Twitter 2.0.”

Furthermore, Musk has seen scandal associated with his decisions to ease up on Twitter’s content moderation policies. Twitter has seen a significant rise in the use of racial slurs and hate speech, according to a report from the Center for Countering Digital Hate. As a result, brand after brand have been pulling ad money from the site, causing dramatically falling revenues for Twitter.

Musk’s decisions in running the company have been getting Twitter closer and closer to bankruptcy. Ad revenue and user interaction have been consistently dropping as Musk’s CEO tenure goes on. This comes as potentially startling news seeing as how many people now use social media as a way to stay informed.

A 2021 study from the Pew Research Center showed that about 69% of adult Twitter users were mainly on the app to stay updated with daily news. This is a significant uptick from a 2015 study that found that 59% of adult users get their news from Twitter.

For years, Twitter has cemented itself as a public, successful free information platform enjoyed by millions. In just a matter of weeks, Musk has flattened the juggernaut into a shell of its former self, leaving its future murky and uncertain.