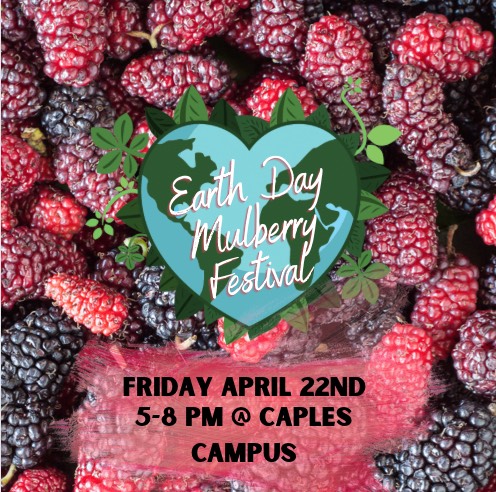 The Earth Day Mulberry Festival will be on Apr. 22 from 5 to 8 p.m. at Caples campus.

On Apr. 22, the Council of Green Affairs (CGA) is hosting the Earth Day Mulberry Festival at the Caples campus. The festival will begin at 5 p.m. and end at 8 p.m.—the time in between decorated with mulberries, hammocks, live music, gardening, painting, yoga, mysticism, dancing, fighting, frisbee and much more—all the while spending time and connecting with the earth and fellow Novos.

A similar event, the 2021 Arbor Day Festival, was held last year, itself following in the tradition of the 2017 Food Forest Festival. The 2021 festival included lawn games, tours of various green spaces on campus and painting.

This year, the CGA initially wanted to focus on mulberries, a juicy and tasty fruit. According to fourth-year eco-rep Nicole Silvera, there are four to six varieties of mulberry trees around campus, but not enough people know about them. She said that the focus was scaled down because the mulberry tree in the Caples Garden hadn’t yet fruited, presumably because of the cold snaps earlier in the year. For example, plans to make mulberry jam were scratched. However, as of Apr. 18, the mulberry tree in the garden is fruiting. Still, the focus of the festival remains expanded: “There will be mulberries for the picking,” Silvera said.

The festival will be almost entirely at the Caples campus, chosen to highlight the portion of the campus to students who otherwise wouldn’t know about it. Or, who don’t quite know how much it has to offer. The CGA, in addition to highlighting Caples, “wanted to involve as many clubs as possible,” according to Silvera—the idea being to showcase the power of the communities on campus working and coming together, and the power of the community as a whole.

“Running Club is teaming up with Swim Club to do a watershed run to the event, Mystic Club will be offering tarot readings, Art Club will organize painting bee boxes and painting labels for the plants, Bullshark Dive Club is helping with bayfront clean up, Feral Pigeons Club is watching and teaching about coastal birds, Frisbee Club is doing frisbee, Freestyle Dance Club will be having like a dance circle/dance off, STEMFem is creating seed bombs (little balls full of seeds) and Fight Club will be beating up environmental enemies—laminating pictures of CEOs who aren’t good for the environment and beating them up,” Silvera elaborated.

Also to emphasize the college’s community, a band made up of students—Freelancer—is going to be playing at the Boat House.

The ambition of the event is to downstream the CGA’s goal to “have something for everyone.”

A professional yoga teacher and alum Hannah Hoogerwoerd (‘21), who also has a background in neuroscience, will host a Yoga flow event at the festival.

“I like incorporating themes about the mystery of the consciousness and wisdom of the body and the natural world into my yoga classes to foster a compassionate, curious connection to oneself, the community and the planet,” Hoogerwoerd said.

After yoga, Caples Garden Coordinator and third-year Lilly Field will hold a short earth meditation, “to send the good energy of our gathering out into the world and set a collective prayer of good intention for the highest good of the earth and everyone on it.”

Silvera said the banyan tree at Caples will be strewn with hammocks, and will resemble a “hammock city.” The relaxed and salubrious environment aims to offer an opportunity for catharsis from the stress of school and world affairs, Silvera mentioned.

“Alumni talk about the New College culture dying, but every alumni says it’s what you make of it in the moment,” Field said.

She added that she thinks that events like this one have the power to create and revive the once-great New College student culture through easier-than-expected means: making the most of the moment, in the moment.

“In a lot of conversations I’ve had recently, people are expressing a desire to cultivate community in a way that may be even more present than the campus that I experienced pre-pandemic,” Hoogerwoerd said. “I find it really inspiring to see people creating containers for connection. This earth day event is gonna be like a beautiful open celebration for students, faculty, staff and beyond.”

One of the primary missions of the CGA this year, according to Silvera, has been “to get students more involved in outdoor spaces on campus and out of their dorms.” This festival is no different, and it looks to be a perfect opportunity for students to do just that, all while having loads of fun.