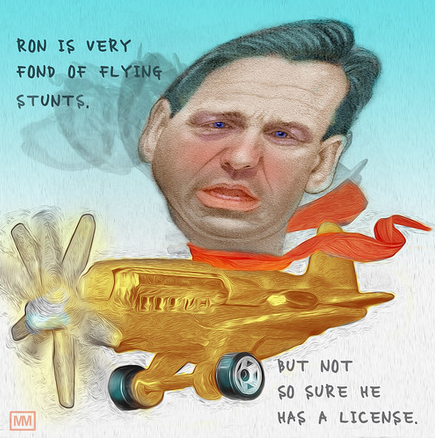 A political cartoon depicting Ron DeSantis with the text, "Ron is very fond of flying stunts. But not so sure he has a license." Photo courtesy of McClaine Moore on Flickr.

Florida Gov. and crusader against all things “woke,” Ron DeSantis, stirs up more controversy concerning the use and failure to account for all tax dollars used in his plan to send Texan Migrants to Martha’s Vineyard. The horrific abuse of human rights that stranded 50 migrants in Martha’s Vineyard in September is now relevant again, as approximately $1.4 million in taxpayer money has remained unaccounted for in the aftermath of these flights.

The question of where the money used to fund the migrant flights disappeared to impacts all Florida citizens—it doesn’t feel good to drive over the tenth pothole on Tamiami Trail when the Miami Herald discovered that the two Martha Vineyard flights cost only about $153,000 out of the $1.56 million paid for in total by DeSantis “to a politically connected contractor for a program to fly the migrants to northeastern states as part of his political stunt.”

Recent opponent for the role of Florida Gov. Charlie Christ was quick to draw attention to this discrepancy on Twitter with a receipt from the Department of Transportation and to put into perspective how much of a drain this was on the average Floridian.

“Ron won’t answer questions, so we looked [for] ourselves: Florida paid Vertol Systems $615,000 on Sept. 8 out of the $12 million deportation fund,” Crist said. “So Floridians paid $12,300 for each refugee DeSantis trafficked for his own political purposes.”

Taxpayers footed the bill for DeSantis’s stab at the Obamas, Nancy Pelosi and residents of Martha’s Vineyard, but they also footed the bill for a private jet to send migrants near the summer home of President Biden that then never went through, as the Tampa Bay Times reported.

The numbers surrounding this story are a little unclear due to the reluctance of the state government to cooperate with probes, not a lack of reporting according to the Florida Center for Government Accountability (FCGA) from an official statement on their website. The FCGA is currently appealing for the release of state records pertaining to the flights within a Tallahassee circuit court. Access to further documentation is also in the works with an attorney from the Governor’s Office, saying Dec. 1 is when they plan to release the requested information, in addition to the FCGA initiating a pending lawsuit against Vertol Systems Company for their records concerning their involvement in transporting the migrants to Martha’s Vineyard.

This lawsuit concerning wasted tax money probably won’t be the last for DeSantis, as the Associate Press reports on around $1 million of public money being used for two more flights for 100 migrants. The flights originally meant to be carried out in early October have been relegated to December according to the Florida Department of Transportation, AP reports.

DeSantis justifies his actions through the idea that these migrants were intending on settling in Florida and that President Biden is ignoring a crisis at the border. In a state where the rich have been driving the cost of living up by 55.3% in Miami and 32.3%in Tampa from 2021 to 2022, DeSantis has shown an increased focus on migrants fearing that they might find their way to Florida. This will be sure to add to the many controversies that follow him into the 2024 presidential election.