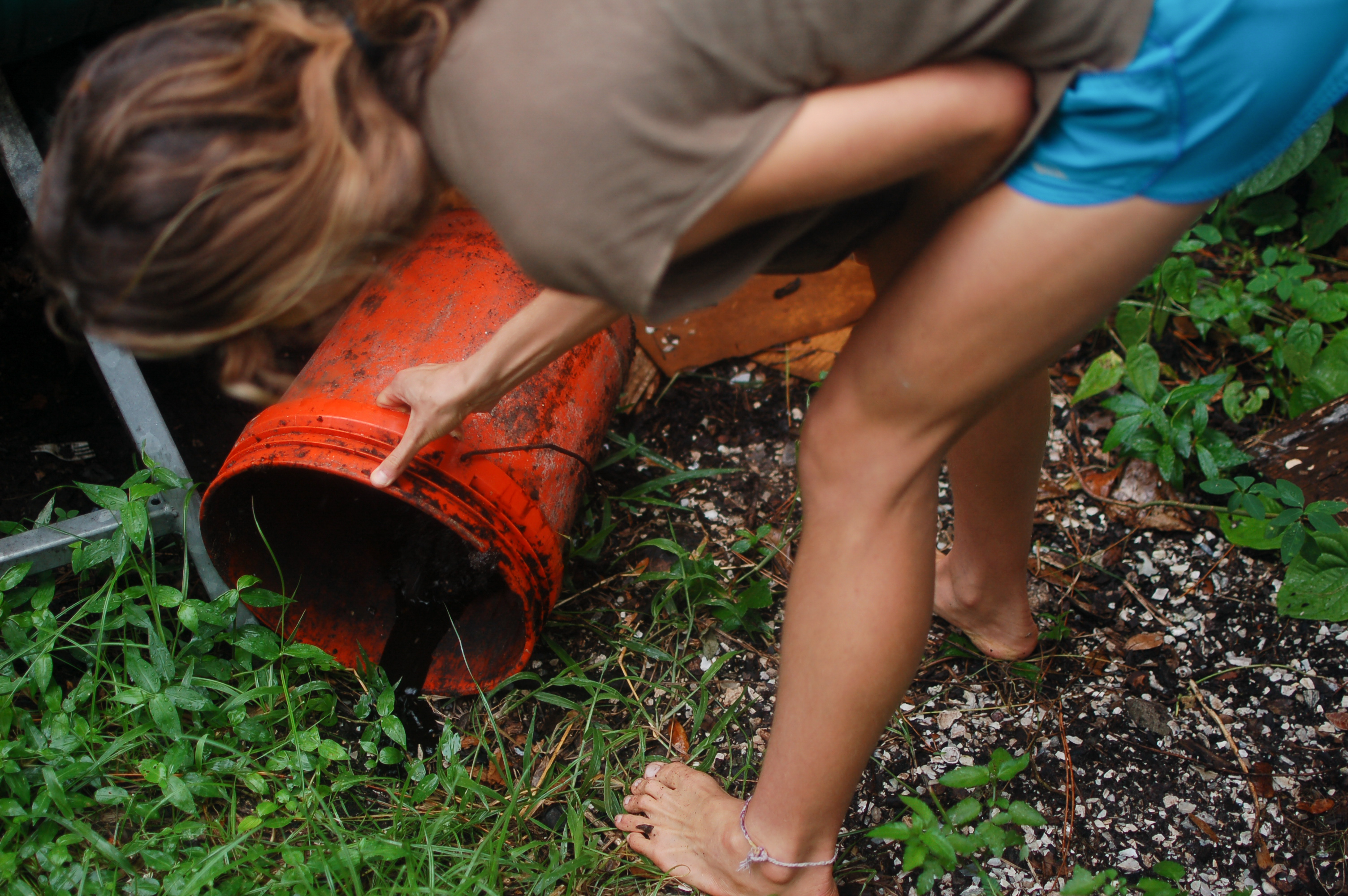 (All photos by Miranda Gale)

Composting has always had a few hiccups. The most recent debacle had third-year Compost Teaching Assistant (TA) Allegra Nolan perplexed: the compost tumbler seemed to be stuck, and no amount of turning could make compost come out.

“Nothing was coming out,” Nolan said. “We were like, ‘oh no, the machine’s jammed.’ So we started with a stick, we started hitting the bottom and finally a friend of mine found a coconut–a whole coconut came out, that’s what was jamming the compost up!”

New College’s compost system uses a compost tumbler to keep the compost rotated and aerated, utilizing aerobic decomposition–and occasionally, non compostable items find their way into the tumbler. The oddest thing Nolan has ever found in the compost?

“Condoms,” Nolan replied, instantly. “You know, there are lots of things that you understand. You say, ‘oh, yeah, I get how someone might think that’s compostable but it’s really not…’ Not used, for the record. In the wrappers. But a pile of in the wrappers, unopened condoms.”

Fruits and vegetables, grains and biodegradable carry-out containers from the Four Winds – although not the Four Winds cups labeled “biodegradable”, as those don’t seem to sit well with the compost tumbler – are all good to toss into the compost system. Large items, such as pineapples, pumpkins and coconuts should be broken apart first. Non-compostable items include meat, dairy, fruit and vegetable stickers and plastic bags, which many students use to compile compost and keep their personal bins from getting messy.

Many students on campus partake in the composting system, funded by the Council of Green Affair’s (CGA) Green Fee and managed by the compost TA and tutorial. The tutorial meets twice a week for an hour-and-a-half, using the compost bike to collect leavings from the community bins on both sides of campus.

The composting tutorial will distribute new personal compost bins once money from the Green Fee can be allocated towards ordering them. Nolan anticipates ordering perhaps another 200 bins and recently sent out a survey to students asking if they felt comfortable having compost bins right in the rooms. The design Nolan is interested in hooks on the inside of a recycling bin and is smaller than the current bins, which student typically leave outside dorm room doors and empty occasionally. While the new design prompts students to empty bins in a timely fashion or face infestations of creatures and mold, the old outdoor bins will remain an option as well. Freezing compost in a plastic grocery bag, then dumping the biomatter into the community receptacle and reusing or recycling the bag is aso a viable choice. 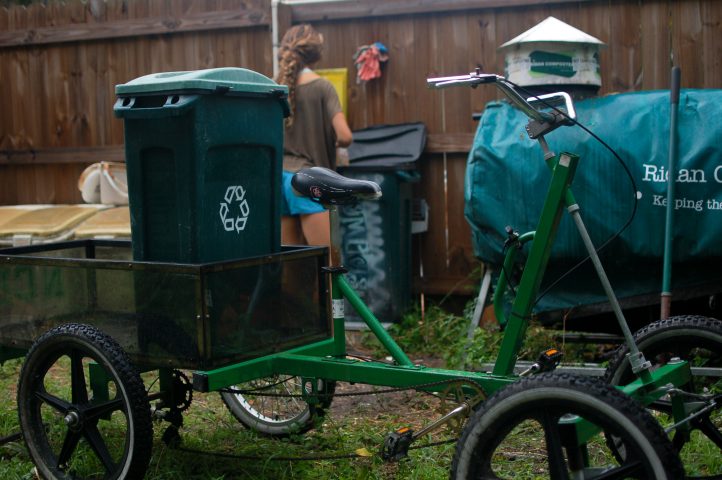 One might speculate that campus composting was set back by Hurricane Irma. Before the storm hit, Nolan talked to Alan Dawson, assistant director of Physical Plant, who suggested strapping the compost tumbler down to prevent it from blowing away, but Physical Plant was too busy with other preparations to implement this plan. Although many trees on campus blew over, the compost tumbler weathered the storm just fine, while the bins and the compost bike stayed safe in the bike shop.

Storm collaborations aside, the relationship between campus compost and physical plant hasn’t always been ideal. Because the compost operation is completely student-run, funded and organized–except for Professor Carl Shaw, who sponsors the tutorial–institutional memory and student participation are essential to its survival. When students don’t prioritize composting, it doesn’t happen, and sometimes food waste is left to rot in less than stellar places such as in bins in and around the dormitories.

“From time to time, [composting] actually goes dormant,” Director of Physical Plant Alan Burr said. “When it goes dormant, [the students] don’t really put it to bed really well. So there’s a lot of composting equipment left around the dormitories and it’s not being emptied on a regular basis or it just kind of all stops, and there’s not a lot of communication about what to do with it.” 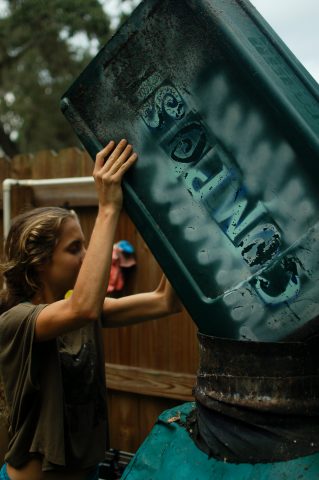 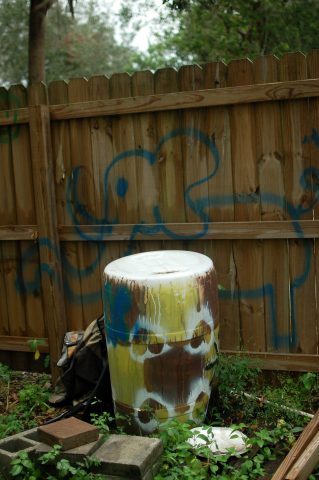 There are two main concerns about uncared for compost and both of these regard the compost bins themselves. Campus aesthetic and pest control, specifically Zika mosquitos are issues that come up when the bins aren’t maintained. For the first concern, Physical Plant bought and assembled the fence surrounding the compost site when Admissions expressed concerns about beautifying the campus for tour groups. The second concern is that pest control becomes especially problematic when composting containers are left out without lids, becoming excellent habitats for the species of mosquito that spreads Zika.

Although Zika hasn’t been discussed much lately, there is concern about staff and faculty members who are planning families, so mosquito control is a campus goal. 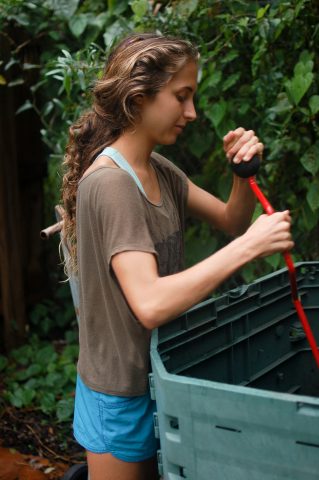 According to the Food and Agricultural Organization of the United Nations, approximately one-third of food produced every year is wasted. This adds up to 1.3 billion tons globally, and in Europe and North America, waste is estimated at 95-115 kg per capita per year, with most of the food lost later in the supply chain. Fruits and vegetables–highly compostable foods–have the highest waste rates.

As of now, there are seven tutorial members and a handful of volunteers collecting food waste on campus. It’s a lot of ground to cover for a small group, but they manage.

“I wish more people would [compost],” third-year tutorial member Emily Anne King said. “I’d say be proud of it because it’s a student run initiative. It was conceived and orchestrated by students.”

“We are made of compost,” tutorial member Deric Harvey said. “Whether you like it or not!”

Information for this article was collected from fao.org and informational materials provided by the CGA. 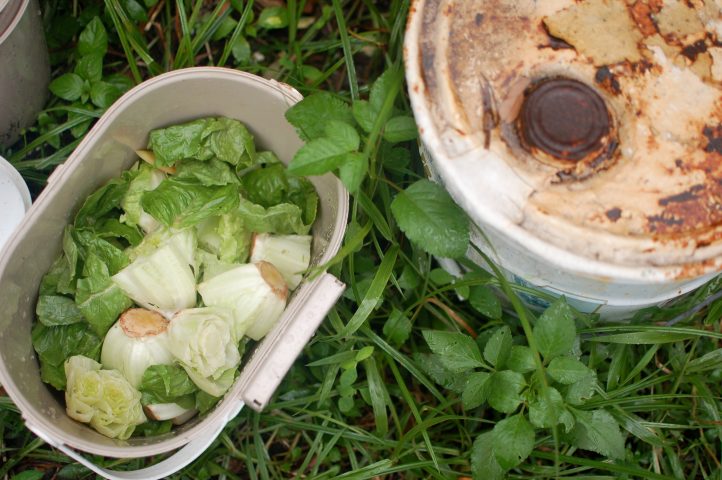 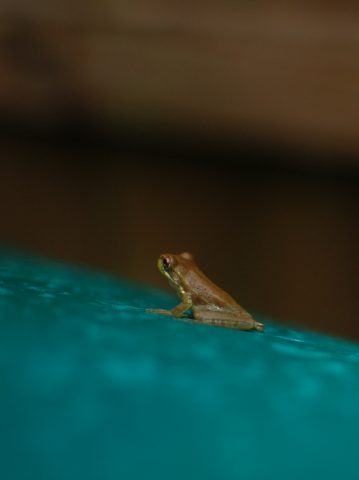