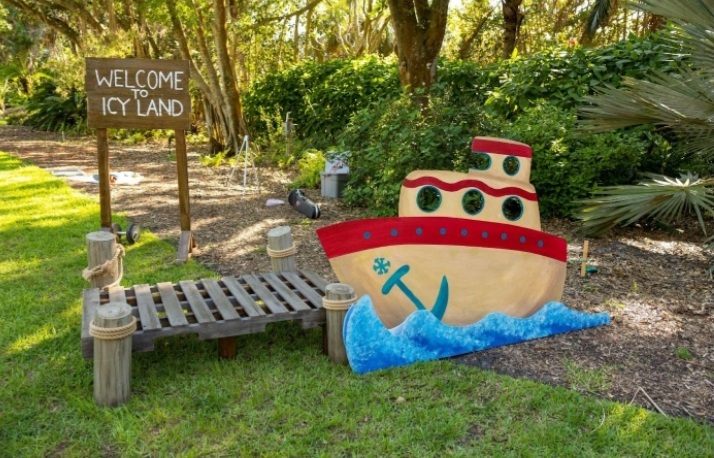 “Welcome to Icy Land” sign on the set of The Fog. Photo courtesy of Nancy Nassif.

New College experiences a slew of productions from the likes of Performance at New College (PANC) and, starting up again this semester, the Windmill Theater Company throughout each academic school year. After two and a half years of collaboration, co-writers, co-directors, co-producers and New College alums Raychel Ceciro (‘18) and Logan Gabrielle Schulman (‘17) worked together to create an immersive, educational experience for younger audiences to understand the nuances of climate change and its effects. Follow the small yellow warbler, Warble, while he learns of the fog that engulfs his arctic home and the inventions he creates to save his home and the world.

The show is described on ncf.edu as follows: “The Fog uses song, silliness and social emotional learning to prepare the very youngest in our communities to fight for climate justice: wielding empathy, kindness and communication as our greatest tools. This immersive theatrical performance concludes with hands-on creative activities and opportunities for young audiences to begin engaging firsthand in work towards climate justice!”

Schulman, who graduated with an Area of Concentration (AOC) in Religion and Theater, Dance and Performance Studies (TDPS), and Ceciro, with an AOC in Literature and Anthropology, learned of the book The Fog by Kyo Maclear (with illustrations by Kenard Pak) from their old roommate Jame Esposito (‘17), another NCF alum.

“This would make a great play,” Schulman said that Esposito had suggested to them.

The Schulman-Ceciro couple then got to work, moving from Philadelphia back to Sarasota after COVID-19 hit the United States and left the Philadelphia theater industry in shambles.

“[We] knew that being so near NCF once again, and potentially through the support of the Mellon Foundation, we would have the tools to make the show happen here,” Schulman stated.

“I thought I wanted to be a musical theater star when I arrived at New College,” Schulman laughed. “But instead I was radicalized towards experimental drama and have never looked back. NCF really let me do it all, and that ability not only influenced the development of my show aesthetic, but additionally gave me a deep well of endurance, determination and motivation. And most importantly, a socio-political philosophy of radical empathy, respect and critical thinking that I don’t think I could’ve gotten in most other university settings.”

The cast consists of students outside of the TDPS AOC–literature, environmental science, music, political science and a handful of thesis students all participated, some with little to no experience in acting.“It was a really interesting experience, unlike anything else I’ve done at New College,” third-year Cooper Smalley, who played the narrator Doctor J. Audubon in The Fog, gushed. “Theater for young audiences is very special and it’s an honor to be a human facilitating the ‘puppet-ness.’”

Students and staff at Ringling College of Arts and Design were also an integral part of the show’s process. The Cross College Alliance has facilitated many projects and has given students at partnering schools opportunities to explore new campuses and a wider variety of courses and activities in higher-level educational institutions such as: University of South Florida Sarasota-Manatee, State College of Florida, Ringling College and New College. This time around, the co-directors had to pave new ways for projects such as The Fog to happen as a collaborative effort, especially during the coronavirus pandemic.

Professor of Film Sheryl Haler at Ringling College, as well as other faculty at Ringling were instrumental in getting the college to see this project. Through this effort, two different classes were used to execute the project: a costuming course spent half of the Fall 2021 term on creating the puppets and an entertainment design course, taught by Professor of Computer Animation Jamie DeRuyter, spent the latter half of the Fall on set design and construction.Despite the multitudes of setbacks and supply chain issues, The Fog was extremely successful, garnering audiences of children, students and community members alike to watch Warble and Icy Land’s fate unfold.