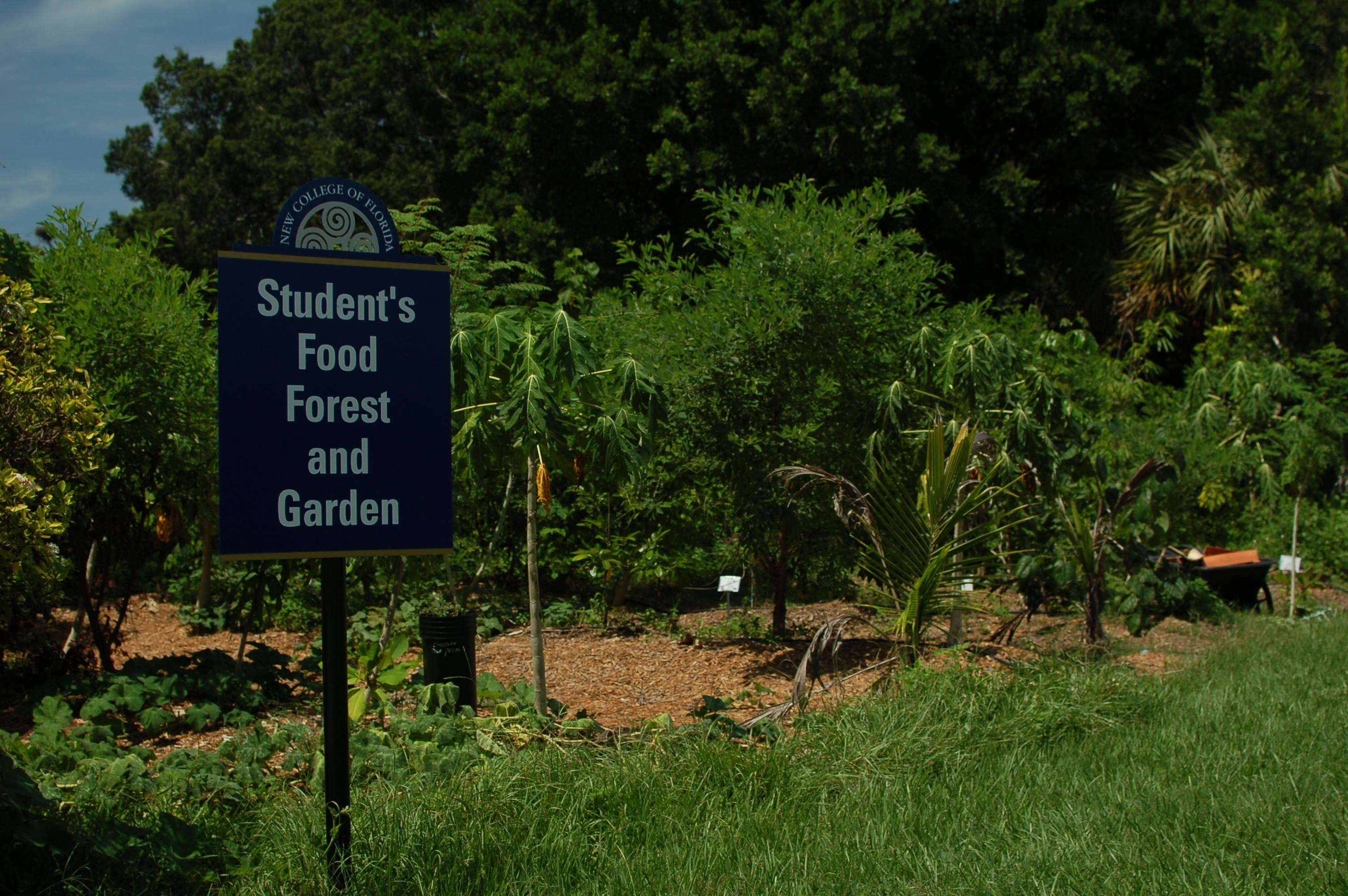 Located near old Caples and the carriage house on the bay side of campus, the Caples garden and food forest are one of New College's hidden gems.

The Caples campus has long been a beautiful and significant part of New College’s history. Outside of providing a home to various music and arts classes, the Caples campus also houses the school’s premier community garden, where students are free to pick fresh mulberries and other fruits. Caples also boasts its own unique view of the Gulf of Mexico, a more secluded vantage point than the neighboring one found outside of College Hall. Despite the enticing attractions, in recent years Caples has become more and more desolate as students have not been populating the space as much for multiple reasons. Recognizing the unfortunate fact that Caples is not receiving the same amount of love that it used to, members of the Council of Green Affairs (CGA) hosted their first event of the year on Sept. 26. The club put on ‘Groovin’ in the Garden’ at the Caples Garden, where students were invited to participate in activities ranging from performing at an open mic, tie-dying clothes, food and a jam session for any musicians wanting and willing to partake.

Construction on the Caples dock has made students not as eager to visit, since a large portion of the area is fenced off and unusable. Additionally, because the pandemic has forced many students to spend more time inside and alone, many newer students simply don’t know about the wonderful place that is the Caples campus.

“I was lucky enough to take a music class at Caples my first year, so I was able to discover how amazing that side of campus is,” second-year Sam Worthington said. “But I know that not everyone knows about it because it’s a bit out of the way and not everyone has had a class there. Not a whole lot of people go over there. It’s kind of a shame.”

“We really leaned into the ‘groovy factor’ of the event,” third-year and CGA Eco-Representative Nicholas Beck mentioned. “It was the first event that we’d ever hosted as a team together, and I think it went really freaking well.”

“The main goal of this event was to revitalize CGA and renew interest in the club,” third-year and CGA Eco-Representative Barbara Monteiro said. “We wanted to do that while also giving people the opportunity to visit campus spaces they may not have before and increase their connection to the New College experience.”

The significance of bringing people back to Caples was not lost on the members of CGA.

“Historically speaking, New College has had a very great and rich campus culture,” Beck said. “We think it’s time to bring it back to how the school was back in the day.”

With the turnout that the event received, it seems as though this is a goal that can be achieved sooner rather than later. The CGA plans to put on another event in the Caples Garden later in the month of October. Even though the first event turned out to be a wonderful time, the CGA members realize that there are efforts that can be made to make future ones even better.

“I think we realized that having more coordination with one another and making more dedicated roles for ourselves would help out a lot,” thesis student and CGA Eco-Representative Nicole Silvera said.

“For the next one, we were thinking that having an autumn or harvest theme would make it a lot more fun and interactive,” Monteiro continued. “We’re talking about doing a possible collaboration with the Arts Club to hopefully get more artistic engagement and more people wanting to perform at the open mics.”

“Performing at an open mic takes a lot of courage and vulnerability, especially when you know the people there with you and you know you’re going to see them around again,” Beck noted. “We want to put an emphasis on creating a friendly environment, and making sure people feel comfortable and open to putting themselves out there.”

Following the event, the CGA members are all very grateful for the chance to host something important to them and their club. They stressed the impact that teamwork had on the success of Groovin’ in the Garden.

“All of us working together is what made it go as well as it did,” Beck said. “Not even just CGA members, Groovin’ in the Garden would not have been possible without the help of the Equipment Manager (EQ) TA, Dominic Santini. He really killed it.”

Looking ahead to the future of the club, the Eco-Representatives find themselves excited for the next time they can host something like Groovin’ in the Garden.

“I loved this event, and I’m so glad that we did the tie-dye,” Monterio remarked. “The day after, we saw a bunch of people in Dort and Gold who had their tie-dyed clothes sitting out on the balcony, and we saw a lot of people wearing their clothes. It makes me really happy because it creates this sense of intimacy at our school, and that’s what New College has always been about. Every time I see tie-dye now, I’m reminded of the event.”

These events are an important part of being a member of the New College community, helping students create memories, art and clothes. For future CGA events, students should keep an eye on their inbox and make sure not to miss the next one coming later this month.