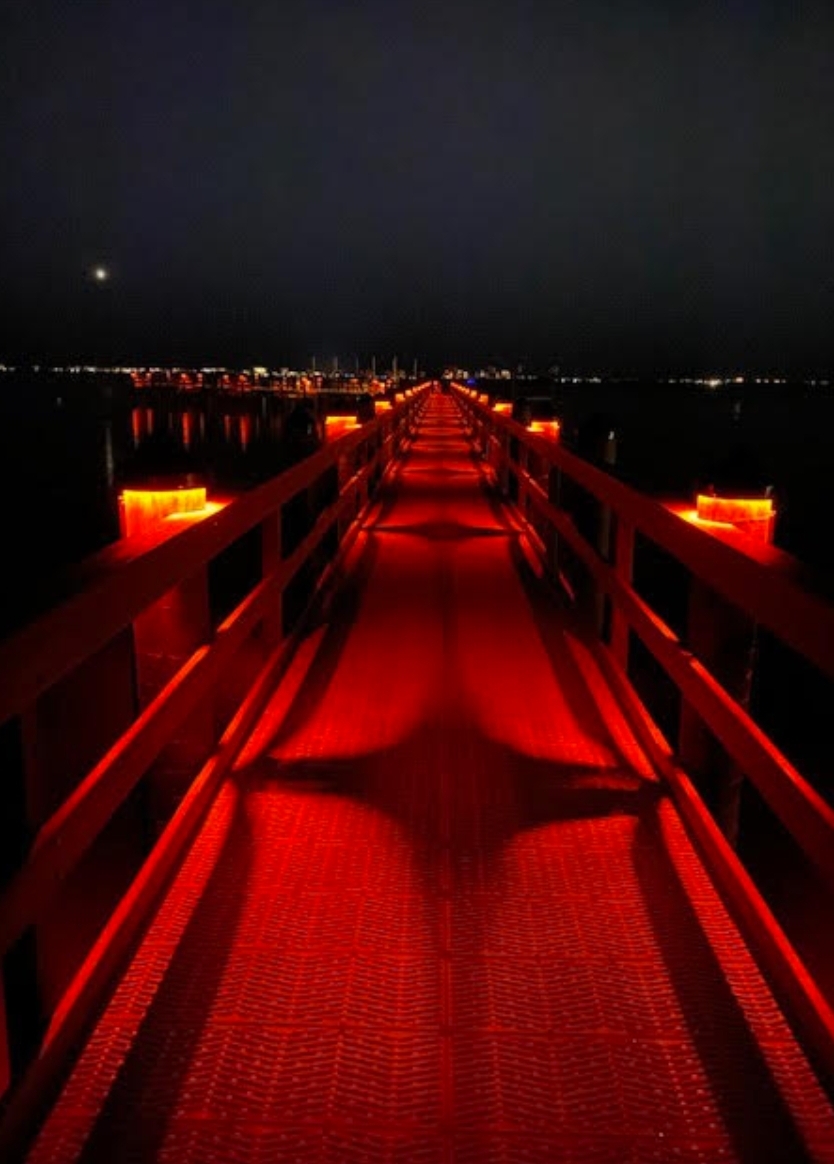 A view of the nearly-finished dock, lit up after hours.

Home to the Waterfront program, the campus garden and the ever-mysterious mansion, New College’s Caples Waterfront has long been one of the most charming spaces on campus. Despite its welcoming feel and stunning views of the bay, the Waterfront has also been notoriously under-utilized by the New College community. In an effort to vamp-up Caples and attract more community usage of the space, the construction of a large dock began a couple months ago. Students have been peering over the construction fences in anticipation, longing to climb up on the dock—and it seems that it will not be too long until they finally can hop onto that elusive boardwalk.

Construction and Projects Coordinator Itza Frisco explained that about four years worth of background work has gone into making this concept a reality, noting that to gain permitting for the project, their team had to get approval from the Center for Disease Control (CDC) and New College leadership. She also credited the idea to construct a dock to Associate Professor of Biology and Director of the Pritzker Marine Biology Research Center, Jayne Gardiner.

“[Gardiner] had a vision and a need for the marine biology program,” Frisco elaborated. “Since research is so significant and primary for her program, she really needed a place to store the research boat as well as being able to get it out to the water.”

Frisco spoke to the benefits of the dock for the campus community both academically and recreationally. She expressed hope that the new infrastructure would attract more marine biology students, or students who would be interested in using the dock for fishing or boating.

“It’s an additional way for you guys to enjoy being at New College,”Frisco said.

Although part of the original concept for the dock was to provide an educational resource for marine biology students, the dock will be open to all students who want to use it. Frisco also said that once the construction is finished and the dock is ready to be open, jurisdiction over its running will be transferred over to Director of the Fitness Center Colin Jordan. From there, the waterfront program will manage the regular operations of the dock.

Frisco reflected that another intention of the project was to assist in promoting the waterfront program.

“Not too many people know that there is a waterfront program over there [at Caples],” Frisco said. “But we thought that the boat dock might actually help to attract people and make the program more accessible.”

Frisco explained that the dock will serve a highly practical role in the functioning of the waterfront: helping students and community members launch their kayaks, boats or other vessels in the otherwise shallow waters.

One of the major concerns within the dock’s construction was ensuring that every step in the process considered the potential negative environmental impact on the waterfront ecosystems. Frisco noted that the project had to follow state environmental guidelines, as well as going through a permitting process with the Army Corps of Engineers, who were “very adamant for these boat docks or any other structure to not affect the sensitive environment.”

Frisco explained that the project recognized concern over the preservation of the seagrass ecosystem at Caples, and worked to source materials that would allow the seagrass to continue flourishing. The dock’s walkway has been constructed using Surestep PVC, which has a weaved grating that allows sunlight to penetrate. This material allows light to pass through and reach the seagrass growing underneath.

“It seems like the dock has attracted a lot of marine life already,” Frisco added. “There’s a lot of different fish out there that it attracts, and it’s just beautiful to see.”

Frisco was happy to note that the dock was constructed to be accessible to all New College community members. The dock will be ADA accessible, with the width of the platform spanning six feet to allow wheelchair accessibility. The dock’s platform lift also offers someone with a wheelchair the ability to be lifted down to the height of the boat.

In looking forward to the future of the dock on campus, Frisco was hopeful that it would prove to have a positive impact on campus life.

“It is a place for students to be able to relax on the water. I can’t wait to see what comes to life with the student activities that could go on there.”