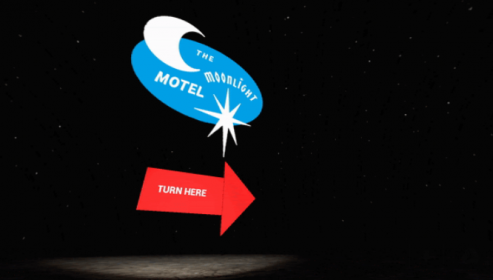 Welcome to the Moonlight Motel, a midnight movie club that favors everything obscure, campy and aesthetically intricate. Run by third-year Dorn Martell, the Moonlight Motel offers a uniquely creepy viewing experience every Saturday at 11:30 p.m. in HCL 8 since Feb. 15.

Martell says that he doesn’t consider himself a film expert, but has an affinity for pretentiously artsy or “schlocky” B-movies so underground that no one has ever heard of them, including Martell himself.

Martell takes inspiration from a Miami movie theater called the Nite Owl as well as local neighborhood businesses along Tamiami Trail. He is dedicated to keeping up the “late-night TV horror” tradition.

Martell is taking suggestions for potential movies to screen and is currently working through a backlog of films. He takes care to pre-screen each film before adding it to his queue to ensure they get proper content warnings and to make sure the film is “bad” without being a downright miserable experience. His favorite part of each meeting are the discussions the films inspire.

“Watching a movie by yourself, you’re kind of stuck up in your head in terms of your own interpretations,” said Martell. “But once you watch a movie and you’re able to gauge how other people react to it, it can open up how you see the film and you can get more interpretations of it.”

Martell plans to continue these screenings until he graduates and welcomes all students to visit him on Saturday nights at HCL 8, “the best seat in the house,” he says.

“The Moonlight Motel is always calling for more creeps,” said Martell, sporting the tagline on Moonlight Motel advertisements. “As many creeps as we can physically fit into HCL 8 are nice.”