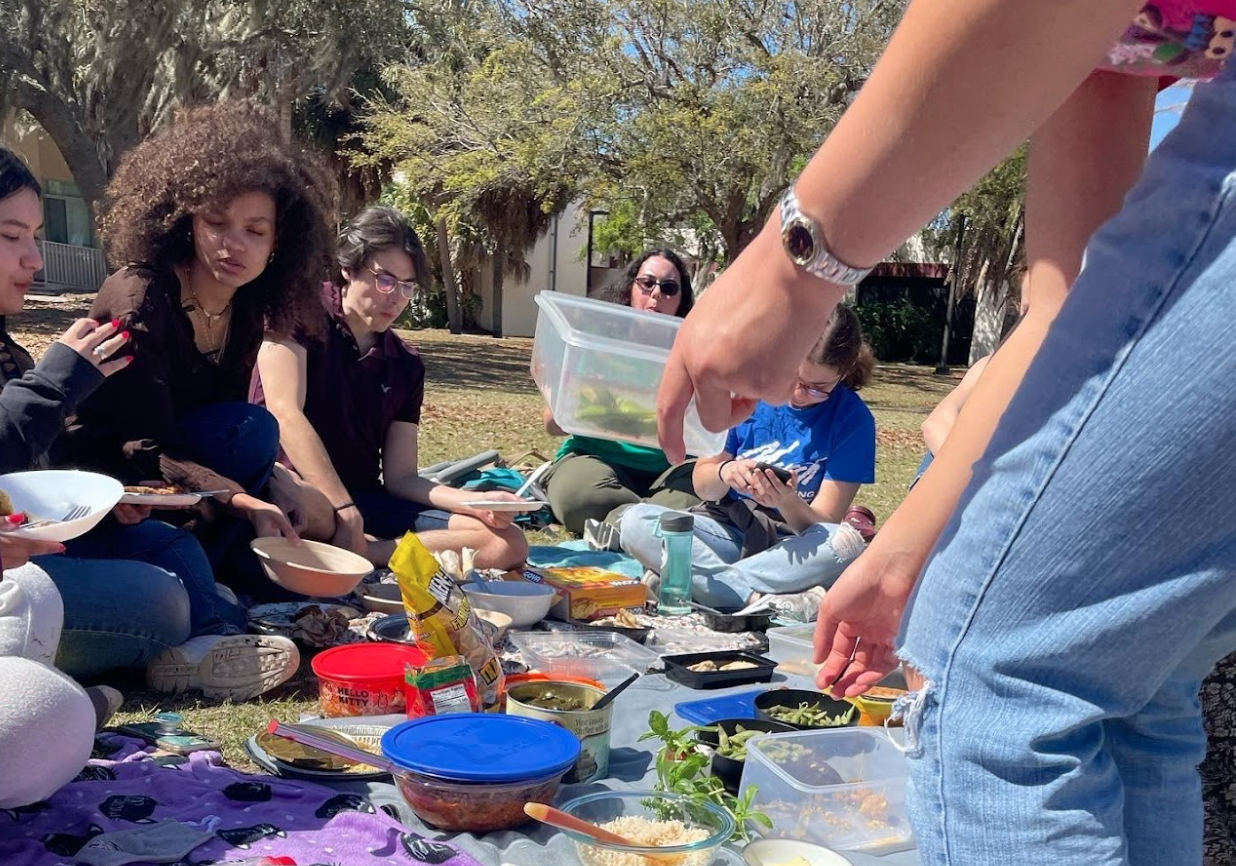 The cultural picnic partially hosted by POCU on March 14, 2022. (Courtesy of Gabriella Batista.)

According to the Clubs and Organizations page on the New College of Florida website, “If you don’t see what you’re looking for, you can create [a club]!” This fact, that one student can create any club they want, is one of the selling points of New College. How easy is this process, really?

To start a registered club, five people are the necessary minimum: someone to found the club, a faculty sponsor and at least three other interested students. Once someone has these people, contacting the Student Activities and Campus Engagement (SAUCE) office is the final step in getting the club registered.

Second-year Shawna Itakura created the People of Color Union (POCU) in their first year at New College, with the mission “to make a safe environment for students of color and have fun,” according to Itakura.

The meetings follow a less strict schedule than other clubs. Each meeting begins with introductions, followed by whatever activity the club members want to do.

A highlight of last year was when POCU collaborated with the New College Student Alliance (NCSA), the Black Student Union (BSU), the Latinx Club, and Hillel to host a cultural picnic, where students could gather and eat various cultural foods.

POCU holds meetings every Wednesday from 7 to 8 p.m. in the Gender and Diversity Center (GDC).

This prolific club was started by just one first-year student, who wanted to begin a club because “there wasn’t one.”

For Itakura, the most difficult aspect of creating the POCU was finding a faculty sponsor. Their advice for other students interested in creating a club is “email, email, email.” They recommend emailing a lot of faculty to find a sponsor, along with emailing students to gather interest.

POCU is an example of a successfully-formed club started by one student, but what about other clubs trying to get off the ground this semester? First-year Ru Thompson is taking the steps to create an American Sign Language (ASL) club on campus. Much like how Itakura saw a lack of a group on campus that aimed to unify POC, Thompson has noticed the lack of any kind of ASL-centric space, whether a club or a class.

“I want to create a Deaf-friendly social space for signers of all levels,” Thompson said. “I want to teach and expose students to Deaf culture and language.”

When the club is formed, the meetings will be voice-off. This means that any speaking out loud will be banned, only signing will be allowed.

“This isn’t just a language club, it’s a culture club as well,” Thompson said, elaborating on this decision. “It is disrespectful towards Deaf people and their culture to speak while signing or speak in a signing space. There are also numerous studies supporting the claim that a full-immersion learning environment helps with language acquisition.”

In the process of making the club official, Thompson has laid out the roles and responsibilities of the future sponsor, collected interest from over 25 students, noted potential officers and has planned a curriculum for the teaching portion of club time. They are still currently in search of a faculty sponsor for the club. In terms of making the club official, this is the last step they have to take.

There is no doubt that creating a club on campus is not only possible, but the steps are also well-documented. With such a straightforward article, anyone can create a club by the end of their first year, and hopefully watch it grow and develop during their time at New College.