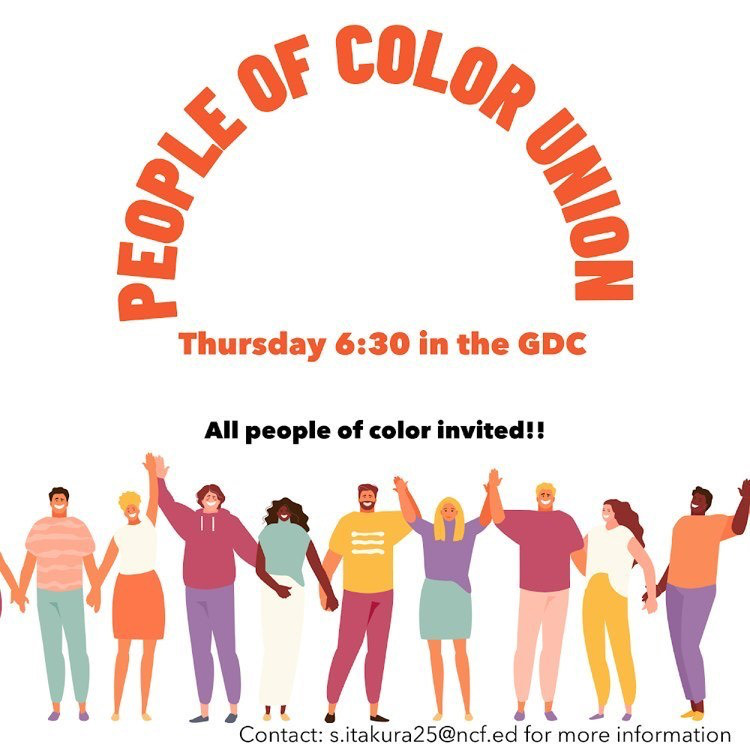 A graphic advertising the POCU, photo courtesy of Shawna Itakura.

The People of Color Union (POCU) was brought to campus by first-year Shawna Itakura as a club dedicated to rebuilding a sense of belonging and support for people of color at New College. Itakura, who identifies as Asian and Black, came up with the idea based on their experience of joining a POCU group at their high school, where through conversation with others strengthened their sense of identity at a school that was predominantly white, similar to New College. The POCU aims to provide a space for anyone who identifies as not-white, although Itakura notes that not everyone who identifies as a person of color fits within the same range of experiences.

“It’s important to share our experiences across cultures, and see where they overlap or separate,” Itakura said. “A Latinx person and an Asian person have very different experiences.”

Itakura recalled that once coming on campus, they noticed an absence of a group that catered to a more intersectional range of experiences across racial, ethnic or identity categories.

POCU is an initiative that addresses an ongoing deficit at New College. Student leaders in the past have advocated for groups like this one to have a more permanent place on campus. Student-led initiatives such as this one are often the only spaces available to facilitate senses of unity and conversation for students of marginalized identities on campus.

“There are so many different cultural and racial experiences within the broad spectrum of ‘People of Color,’” third-year Bren Gonzalez added, echoing Itakura’s sentiment. “Just as it is important within a primarily white institution to have a space for ourselves, it is also important to recognize differences between people who fall within the spectrum of POC.”

They elaborated on the difficulties of existing in spaces that were primarily white, even in more intimate spaces.

“When talking to my white friends, I feel like I have to explain myself before getting to the root of what I was uncomfortable with,” Gonzalez said. “Here, I don’t have to explain that.”

Gonzalez continued by admitting that a space such as POCU was a relief from the typical encounters that they would normally have.

First-year Francis García Fernández agreed, offering that “it is almost like giving your identity a break.”

The club highlighted the differences between their role on campus and the roles filled by other diverse groups such as the Black Student Union (BSU), Latinx Club, Queery, T-Party and Hillel. Itakura noted that the club’s purpose is to provide a space for intersectionality between all of the aforementioned identities.

“Having an BSU or Asian American and Pacific Islander (AAPI) group is important, because it draws people together due to their similarities and shared experiences,” Itakura explained. “Just as much as POCU is about finding commonalities, it is also a place to learn more outside of your own identities as an individual.”

As for the club’s operations, members described their meetings as being a “very chill, democratic process,” as put by García. Meetings surrounded more serious discussions of identity and experiences, but also included more relaxed activities geared towards building community, such as study sessions, movie nights and in the future, field trips. Ideas for future meetings included members bringing snacks from their own cultures to share with the group.

“Even if there is a large queer population on campus, those queer experiences can be painted by race and cultural background” Gonzalez said, speaking to the particular intertwining of queer at POC identities at New College. “Having a club like this paints a clearer picture of why our queer identities maybe turned out in a different way than our white queer peers.”

In terms of the club’s plan for engagement on campus in the future, members articulated that POCU is still operating as a relatively small group, working on getting to know each other and building community before reaching out to other people.

“Before we do more outreach work, we need to ground ourselves,” Itakura explained.

García encouraged community members to attend an upcoming Student Activities and Campus Engagement (SA[U]CE) event in March 2022, which will provide an opportunity for the group to share what they are doing and activities in the works: select events that will integrate the larger student body.