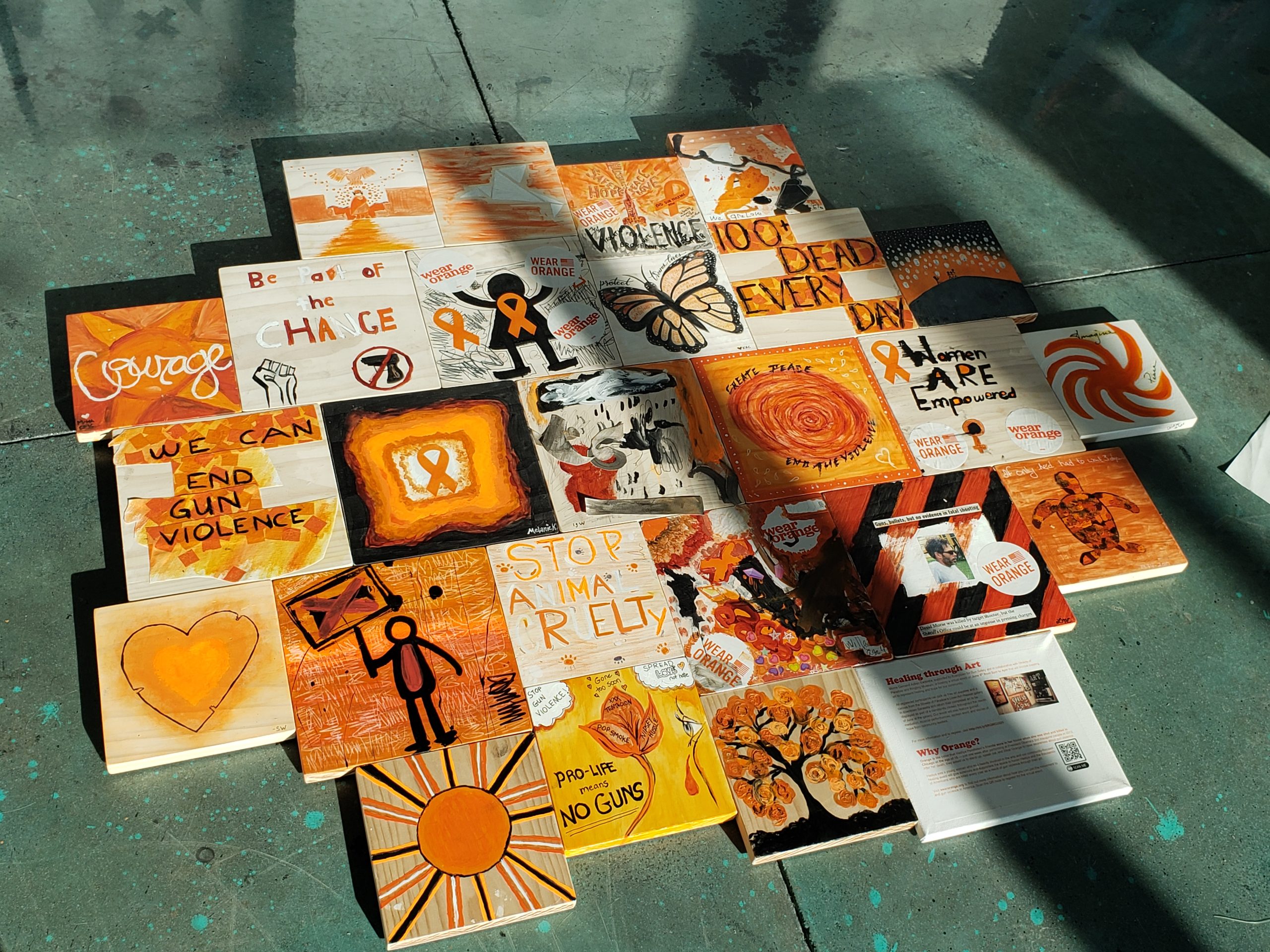 A piece of locally-made art, waiting to be hung on the gallery walls.

Approximately a ten-minute drive from campus and nestled in the Rosemary District—as the bustle of Sarasota slows from shiny new roundabouts crowded with cars to hot, unforgiving sidewalks crowded with pedestrians—is an empty room next to the Planned Parenthood on 734 Central Ave. The wide windows facing the street let in light from the setting sun and illuminate the tiled floors, speckled with cyan paint. The artwork hangs intermittently underneath gallery lights, or else lies on the floor or propped up against tables and chairs next to empty water bottles. Out back, an empty gravel lot sits, waiting. In three days, this space—the Streets of Paradise “Love, Art, Repeat” gallery—will finish its transformation for the grand opening, complete with an outdoor concert on Oct. 16 from 2 p.m. to 8 p.m.

Streets of Paradise is a local non-profit organization that aims to provide resources to the homeless through outreach initiatives such furniture donations and foodshares, a biweekly event where volunteers provide home-cooked meals to the community. Streets of Paradise was first established by then-community organizer, now President Greg Cruz as an informal weekly outreach group, but has grown since Feb. 2018 once it became registered as a 501(c)3 charitable nonprofit.

“Streets of Paradise started out trying to meet that basic need in the community,” Cruz explained from his black armchair after offering the Catalyst reporter water, his back to the gallery windows. “We saw hungry people and we saw people that were cold during the winter and hot in the summer, so we tried to meet those immediate needs. And then after a while we started growing and venturing into new spaces, and found ourselves in a space where the city had deployed a rapid rehousing strategy.”

Streets of Paradise was approached by the Suncoast Partnership to End Homelessness in Jan. 2019, and was asked to provide a solution for a less-commonly addressed problem that came with rehousing people—a lack of support beyond those basic needs of food and clothing.

“They were getting people off the streets and into housing, but then those people moving in, some of them were just the clothing they had on their backs,” Cruz continued. “Some of them just had a bag’s worth of stuff, and they weren’t staying housed long. The rate of people going back to the streets was high, because they were going from sleeping on the sidewalk to sleeping on the floor inside of space.”

In response, Streets of Paradise started the Street to Home initiative with the goal of securing furniture and household goods in order to provide people with fully-furnished living spaces. Cruz estimates that each home requires anywhere between five to 15 donation pickups in order to create a livable space. About two and a half years later, Streets of Paradise is celebrating 1,000 fully-furnished homes—the equivalent of an estimated 10,000 donation pickups—with the grand opening of “Love, Art, Repeat.”

The artwork at the gallery spans a wide range of mediums. Paintings, sculptures, collages and even edible art, Cruz said that everything featured was made by a local artist. Additionally, any art sold at the “Love, Art, Repeat” gallery will have a portion of the proceeds go back to Streets of Paradise.

“We definitely want to have art that inspires conversation and that kind of digs in and touches on some of the things socially that are happening,” Cruz said, reflecting on the art piled around him. “There’s a good outlet for the artists and definitely good conversations that need to be had these days, so let’s create a nice safe environment to do that.”

The gallery space is being provided by the Planned Parenthood next door, as well as the gravel lot where additional festivities will take place. The gallery was once rented by the Ringling College of Art and Design as their “Madeby” gallery space, which has since then relocated to the Ringling campus. Cruz said that the space had been vacant for two years prior to Planned Parenthood offering it to them.

The grand opening will feature around 15 vendors selling goods and services from clothing and ceramics to massages, as well as edible art from Ellie’s Delicacies. Catering will also be provided by Leaf and Lentil, a popular vegan option among New College students. Other activities at the grand opening include a silent auction and an art raffle. Live performances will include John Russo—local crooner and Barry Manilow-esque performer—a few spoken-word poets and even a hip hop dance troupe, Cruz said. The grand opening will also feature local DJ Nat Keza.

“She’s actually our house DJ for all of our events,” Cruz said. “She was here for our soft opening and in the future she will be doing all of our events. She’s an amazing talent. She’s also a music artist herself, but she knows how to create the perfect vibe for a gallery to keep the flow going.”

While participants will need money to participate in certain things—such as the vendors and the silent auction—the “Love, Art, Repeat” grand opening will have free entry.

“We never want money to be a barrier for people coming out to see what we have going on,” Cruz explained. “Once you get inside, there’s going to be a lot of fundraising, so if you come without money you probably won’t be able to participate in those things. But we definitely want anyone to be able to come by and enjoy and check out what we have going on and come to the gallery.”

Currently, the “Love, Art, repeat” gallery is open Monday through Friday from 10 a.m. to 12 p.m. and is being managed by an intern. Cruz said that hours will be extended to make room for additional events after the grand opening, many of which can be found on the Streets of Paradise Facebook page. Some of these events include pumpkin carving on Oct. 23 and a poetry jam on Dec. 11. The space is also being used for the Streets of Paradise “Paint, Pour, Repeat” painting classes every other Friday, and the “Adaptive Art” classes for adults with disabilities every other Wednesday—both classes that Cruz teaches.

“We’re really just trying to get creative,” Cruz said. “Think outside the box, keep it fun, keep it light. Create a community space with some positive energy and good vibes, make people want to come and participate. Especially knowing that any of the money we generate here, 100% of it goes to our mission of continuing to furnish houses.”

For every moment spent in the half-formed gallery space, Cruz seemed to remember another art installation that couldn’t wait to be featured—repainted and stylized furniture, sculptures made of recycled metal, avant-garde dresses and crocheted dolls. All of it and more will be on display at “Love, Art, Repeat” for the New College student looking to wrap up their fall break with an event that gives back to the community, and the opportunity to give to a great cause in turn.