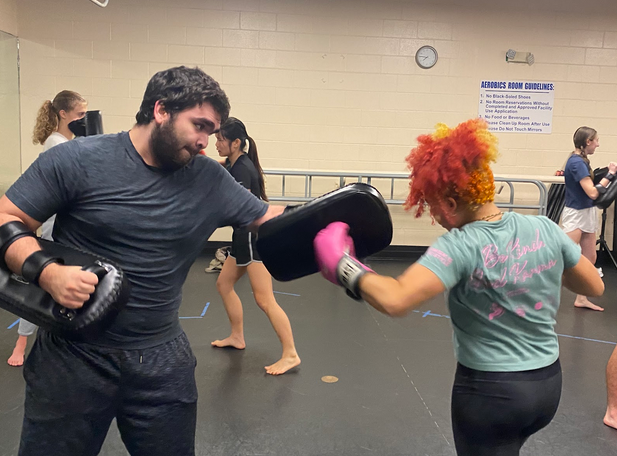 If one needs proof that every inch of the Novo is blessed with venom, they need to look no further than Fight Club. Beginning life as a Muay Thai kickboxing and Shotokan karate club in Fall 2021, Fight Club has given way to a constructive culture of combat on campus wherein anybody regardless of experience level is able to find their own fighter.

The first fledges of Fight Club came to thesis student Barbara “Babs” Monteiro in 2020, amidst a growing list of on-campus break-ins: it was a time where it was easy to feel vulnerable. In spite of this, Monteiro expressed that she believes everyone can be strong.

“I think that Fight Club is a space to explore your limits and realize that you’re a lot tougher than you think,” Monteiro said. “I think it stands for being strong [and] reminding yourself that you’re able to be a protector. I always think about the quote, ‘Be a warrior in a garden and not a gardener in a war.’”

Fight Club co-instructor and third-year Chris Wing expressed a similar sentiment, putting emphasis on the club’s fighting as a means of exercising self-discipline.

“The end goal of the club isn’t trying to lash out or anything,” Wing said.. “I don’t know what kind of outside impression people have [but] it’s a very safe and welcoming environment.”

Reaching an orange belt in Shotokan before COVID-19 shut New College down, Monteiro also got her green belt in Muay Thai after local gyms began to open their doors.

Muay Thai kickboxing is a martial art originating from Thailand, with the most significant addition to standard kickboxing being elbow and knee strikes in tandem with punches and kicks. While traditionally taught with less of an emphasis on upper-body mobility, Fight Club’s instruction includes the head movement, weaving and combos of more orthodox kickboxing.

“I’m still a little bit of a novice, but I think that I have enough experience to be able to teach others,” Monteiro said.

While having experience in both Shotokan and Muay Thai, Fight Club in its present form exclusively teaches Muay Thai. Originally, Fight Club was co-taught by Shotokan black belt Yara Rincon, but‒when she graduated‒Monteiro retooled the club into what she believed she was most capable of instructing others in.

Though she concedes that there isn’t a likelihood for Fight Club to participate in local competition in the near future, Monteiro is optimistic that her students will take the reins long after she’s gone and continue to expand the club.

“I’m trying to take my role as the leader of the club and branch out,” Monteiro said. “I currently have open applications for different roles in Fight Club, and a lot of it isn’t actually even in the [Aerobics and Dance] Studio.”

Of the club’s students aspiring towards competition is first-year Jessica Mazon. Even though Fall 2022 marks her debut in the club, Mazon brings with her a storied history with martial arts‒having also dabbled in taekwondo and traditional kung-fu.

“I would love for Fight Club to grow into a club that competes and trains for these competitions,” Mazon said in an email interview. “Sort of bring it to the next level where there’s still options for the more laid-back approach, but for people who really want to get into competing and sparring there’s that option too.”

While Fight Club’s final meeting of the Fall 2022 semester is Dec. 8, Fight Club is still taking applications for all of its officer positions going into Spring 2023 until the end of the semester.