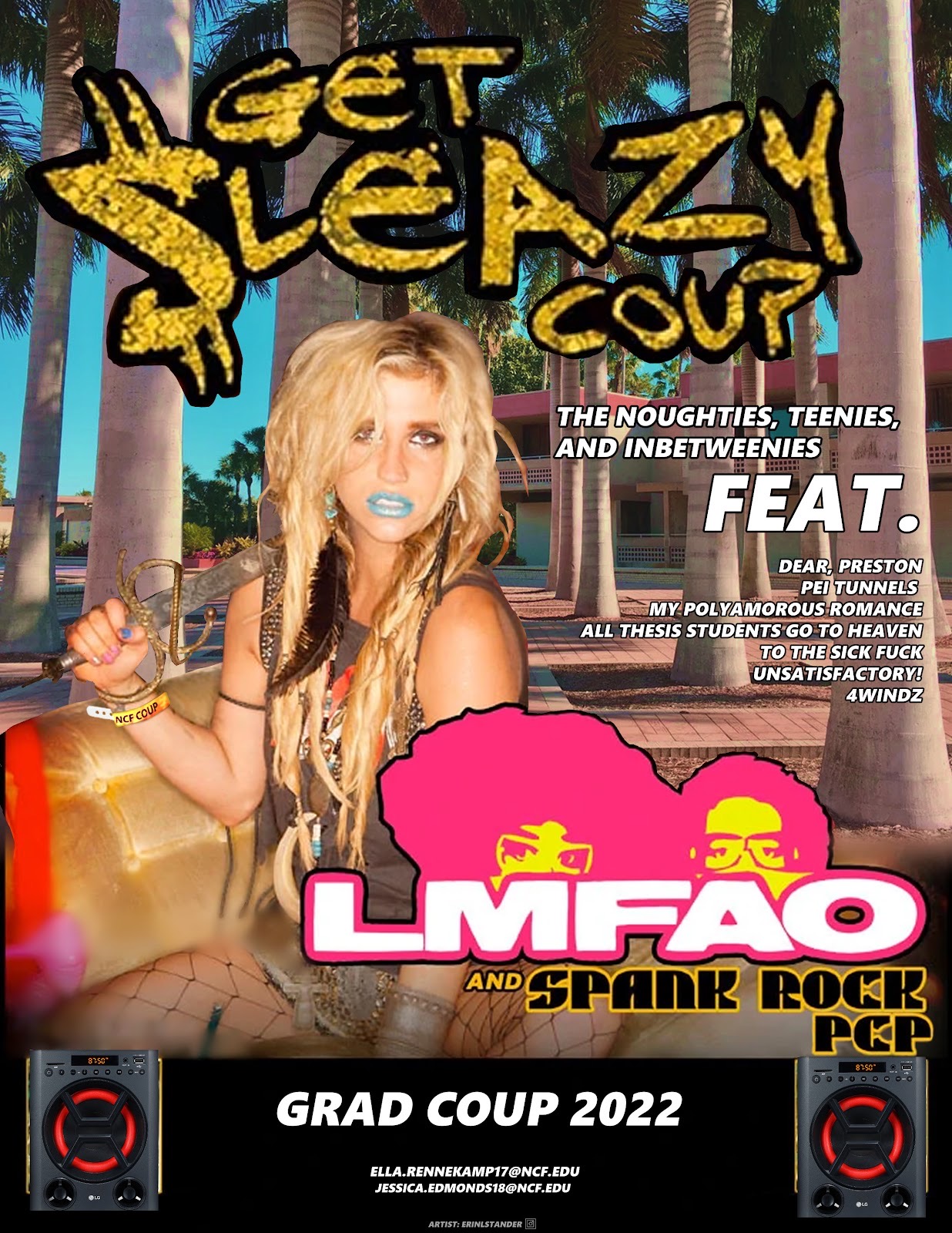 Work hard, play hard: a classic proverb that can accurately be used to describe the mentality that New College students have maintained over the years. Since its beginnings in the 1960s, New College has earned and thrived on a reputation of being a tightly-knit community of liberal arts students that share just as much of an interest in their studies as they do in throwing campus-wide ragers. Current students know this all too well, having heard countless nostalgic retellings of those wild Walls and infamous Palm Court Parties (PCP) hosted by students back in the day. Despite the presence of this institutional history of party culture, New College has recently and undeniably gotten quieter and tamer, and students have taken notice. With this year’s “Get $leazy” Graduation Center of the Universe Party (COUP), its hosts, thesis student Jessica Edmonds and recent graduate Ella Rennekamp, hope to rekindle the heart and soul of New College.

“The first COUP [S.O.S COUP] that I went to and loved was in 2019, it was in the spring and it was extremely immersive,” Rennekamp remembered. “It was really well decorated and there was a lot of live music, and you stepped out onto campus and you just felt like you were in a different place. That was the expectation that I’d had of COUP, and then the ones that followed were not much like that. They sort of just seemed like really big Walls. And post-COVID, although people are putting effort into the COUPs, it’s just a very difficult thing to pull off now.”

“The culture also has changed so much,” Edmonds commented. “Even before COVID-19, administration has tried for years to erase New College’s reputation as a party/drug school, which they have successfully done. But COVID-19 especially has really aided them in that endeavor.”

COUPs following COVID-19 were dialed back because of the pandemic. They featured fewer in-person elements and more safety precautions, which is not the best recipe for a party of this campus’ standards.

Thinking about campus before and after the coronavirus pandemic hit, Edmonds and Rennekamp couldn’t help but notice the differences in the ways that students socialize with one another in a socially-distanced environment.

“It seems like people don’t party anymore,” Edmonds mentioned. “But I think people do party, they just party within their own friend groups and their dorms.”

“Everyone is extremely potted up after COVID-19,” Rennekamp said. “The amazing thing about COUP in the past is that because it was so immersive, there was this collective sense of awe that I think brought people together and made people want to branch out of their friend groups a little bit more. So, I think the goal is just to try to bring people out of their shells and bring people together.”

“We’re really making it a campus event,” Edmonds emphasized. “Now that we’re graduating, I think we wanted to submit a theme because it’s our last attempt to do something like that. We wanted to continue that attempt of student-run initiatives and keep the New College spirit alive.”

When throwing a party with such a goal, the duo knew that serious thought had to be put into the theme.

“I was trying to think, what could we do that would be fun, doable, not too niche and something that would please the students,” Edmonds said. “So we were thinking Y2K at first, but it’s kinda done a lot right now. Then I was like, let’s bump it up a few years, like 2000-2016. Kesha, Macklemore, Kanye. I think that’s very nostalgic for all of us because we were like 10 years old or early teens at the time. It’s poppy, it’s fun, the vibes were good.”

“Great years for partying, great years for self-expression, DIY stuff,” Rennekamp added. “People were going out and doing stuff. It was the golden age of partying.”

“The title comes from a Kesha song called ‘Sleazy,’” Edmonds said. “Kesha’s first tour was called Get Sleazy, and I thought we had to have that COUP.”

The pair of hosts also made it clear that live music at the function is not optional, channeling the COUPs from the past, lined up with various acts.

“The measure of success for a good party is if people show up and if there’s good music,” Rennekamp stated. “We’ve spent the majority of our budget on live music.”

“Our friend Jules, going by OOIDS, is doing a glitch music set,” Edmonds said. “A band from St. Pete called Liquid Pennies is performing. And Myles Optimystic, a conscious rapper who played a lot of New College shows has a set.”

“Live music just brings so many different people together,” Rennekamp said. “Live music is a weapon against how alienated people have become.”

Edmonds and Rennekamp have put forth a lot of time and effort to keep the spirit of New College alive and show younger students the potential the campus culture has to offer. The two want to emphasize that while the process does require attention and initiative, it’s nothing totally unmanageable.

“I wouldn’t do it if you’re juggling classes and a part-time job,” Rennekamp advised. “But if you feel like you have the time, I think anyone could throw a COUP.”

Finally, Edmonds and Rennekamp expressed that the party is ultimately made for the student body.

“We want this to be anybody’s party,” Edmonds said. “It seems like people want to get back out there. I have a lot of hope for New College’s future.”