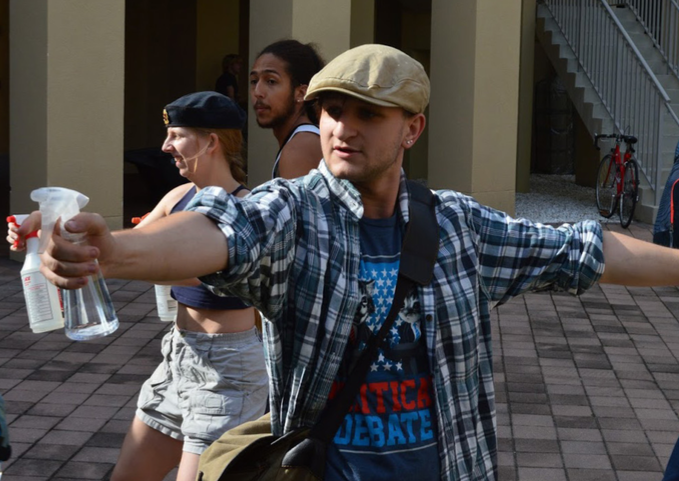 Of the 193 humans and seven zombies that began this year’s annual game of Zombies, no humans survived.

At 3 a.m. Sunday morning two students called a group together for help with their thesis. Lily Gonzales stood in the center of an elaborate chalk circle on the bayfront pier and attempted what looked like a complicated ritual.

A moment later humans started screaming and the apocalypse began.

“Kyle, this is all your fault!” Gonzales screamed, limping towards a terrified group of humans armed only with squirt guns.

“New College has been corrupted!” Kyle T. Johnson shouted in response, urging the small group of humans to sign a battered notebook.

Seven zombies were present at this first feat, but by the end of the night the zombies numbered in the twenties.

Later that same day the remaining humans came together for the first “checkpoint,” a mandatory event for all humans who wish to continue being counted as among the survivors. The checkpoint took place in the old mailroom in Hamilton Center, dubbed “the Ham Death Trap” by returning humans. Johnson expressed uncertainty at the cause of the sudden zombie plague. In response to this, the zombies did the “Thriller” dance outside of the checkpoint.

At 4 p.m. a group of humans met in the Dort lounge and proceeded to the feat “Pretty Much Boned Already” and attempted to defend the first, second and third bases from falling to the Zombie Horde. The humans managed to successfully complete this challenge, but there was not much room for celebration, as the 6 p.m. checkpoint loomed over them.

The checkpoint at 6 p.m. –  named “Something to fear” – turned quickly into a bloodbath. 47 humans marched in a huge circle through an enormous gathering of zombies to the woods behind the basketball court, and at Johnson’s request looked for an encoded notebook on the forest floor. Half-way through Johnson explaining the importance of the notes, a possessed Gonzales appeared. Gonzales led a zombie with three eyes on a chain, and after a brief threat and an “oops!” dropped the restraints, unleashing a berserker zombie.

27 humans made it out of the checkpoint alive.

At 4 p.m. on Tuesday all contestations were settled in “The Pit,” a gladiator-style feat in which humans were given very small water guns and challenged to face three or more zombies for five minutes.

One human went four rounds in the pit, each of increasing difficulty, and survived, before sacrificing themself to the Horde. Gonzales sent an email to the forum later that afternoon, granting safe passage to and from that night’s checkpoint (“I Ain’t A Judas”) for all humans because of the earlier sacrifice.

No humans showed up to the feat at 4 p.m. “Whispers into Screams” at Z tower, in which humans would have been required to defend all three levels of Z tower from the zombies.

11 humans made it to Bon House and fought off multiple mass-charges of zombies while ‘randomly’ selected human Sean Wollard tried to hit a piñata while blindfolded.

Five humans made it out of the checkpoint alive.

Later, Gonzales and Johnson ruled in favor of a group of humans in a dispute about whether the Horde had charged too early, and in what is now being called “The Pritzker Revival,” or by zombies “The Pritzker Disappointment,” more humans were given their lives back.

“The Day All the Humans Died”

Johnson called for a human escort at 6:30 p.m. at a feat dubbed “Walk With Me” (Johnson retrieved a pine cone from the Palmer Courtyard). One human – and Johnson – died in the feat, rendering it a failure. The zombies did the “Thriller” dance with Gonzales in front of Ace to taunt the remaining humans taking shelter there.

At 9 p.m. the zombie horde convened in apocalyptic numbers on the Caples campus, where the humans had to fight their way to the Carriage House. Only one human survived the exit of this checkpoint.

The human that survived the “How fast can you Run?” Checkpoint was hunted by an incredibly coordinated horde of zombies who found him quickly.

“Legel let himself get trapped in a bathroom – he went to the only spot on campus where people would be sure to fucking look for him,” Johnson said on Friday in an interview with the Catalyst. “[He] deserved whatever fate that he got.”

The last human was killed by a group of enraged zombies at 11:57 p.m. Thursday night, and the game was concluded before the last checkpoint and feat.

“I definitely felt like this was a different kind of zombies than I’m used to, the game has usually been stacked in favor of the humans and the zombies have trouble mustering the numbers – this year the zombies were extremely coordinated,” Johnson said in an interview, reflecting on the nature of the game this year, and how well the players did. “It just felt like the humans were constantly getting picked off by the zombies and after a while I was worried the humans were going to die off early.”

After being asked about why the humans were killed off so early, Johnson shook his head.

“We had a really good game out of it this year – I kinda wish we had had the last checkpoint with only one human but… They would never actually have lived, but it still would have been fun.”

Many of the humans who survived the first couple checkpoints and feats were frustrated with Gonzales and Johnson for seemingly wanting to kill all the humans by Tuesday of last week, and thus beating the current record for quickest annihilation. After surviving past Wednesday’s feat, the humans continued to mutter about Johnson’s ill intentions.

“After running it my second year and having a game where three people survived, I did want to have a game under my belt where no one survived. We knew a lot of people were going to die in the process.”

That cavalier attitude may be what led to the idea that followed Johnson throughout the game. Decoded notes and holes in a video shown tuesday night continued to say “This is your fault!”, seeming to indicate Johnson.

“The Cost of same thing is what you give up to get it,” Johnson revealed cryptically. “The whole summoning of the Eldridge God to help us with our thesis required something more, it required an exchange of something. While Lily was the open performing the incantation and standing in the circle, I was well off to the side and it was implied that I knew that Lily was going to get damaged by this Eldridge god, and I just let it happen.”

That bares the message many zombies and humans took away from the 2016 New College Zombies event: it was all Kyle’s fault.