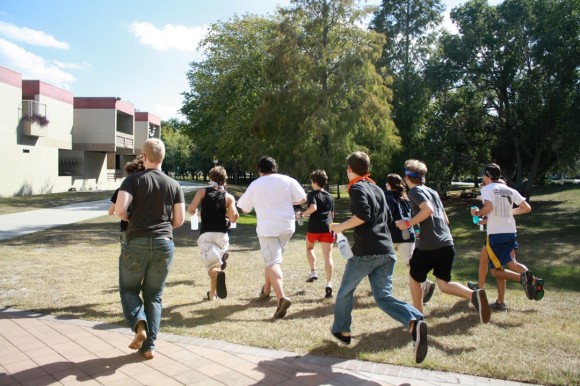 Sometimes there is no better alternative than to run.

The sickness has passed, the dead are in their graves where they belong and the game of Zombies, a New College favorite, has come to an end.

Among the carnage and wreckage that remained from the post-apocalyptic campus, two journals were salvaged.  The following excerpts are from these journals and are based on true events:

It’s been less than 24 hours since the outbreak. Zombies are everywhere, but today a small group of humans and I made our way to the checkpoint. We met in one of the dorms and made our way out the balcony, slowly treading along the side of Pei until we reached the side entrance of the Z dorms.  A zombie spotted us, and roared a deafening cry of “HUMANS!” We ran. I couldn’t look back but I knew my comrade, Kaley was nearby. Other humans had secured the top floor and we flew up the stairs as we shot at the zombies at our heels. One checkpoint was done, but I knew it had been almost too easy, the worst was still to come.

We were discovered. I don’t how they did it but the bastards found us. Cooped up in Skylar’s room, trying to pass the time we heard a clatter.  Anna insisted on investigating and walked on to balcony, flashlight in hand. After a moment of silence we heard a blood-curdling scream and a flurry of motion followed.  A zombie jumped on to the balcony and leaped through the sliding glass door. Skylar and I whipped out our weapons and shot him before he could infect us. We knew the horde was nearby but we could do nothing to stop the congregation collecting outside. We were livestock before slaughter.

Kade, Kaley and I made a morning rush to the other side of campus. I stayed at the library where my next class would be held and hoped they’d be all right. I had to make a mad dash out of class alongside Matt, but other than that things went smoothly. I saw Kaley that day, but she seemed a little off. Maybe the tension was getting to her but she seemed a bit different today. Maybe it’s just my imagination.

I had the strangest nightmare.  I woke up in a cold sweat thinking the disease had gotten me. I laid outstretched on the floor, waiting for the moment of clarity that follows the realization that a dream was just a dream. But it did not come. I could not shake off the feeling that I was being watched. I turned on my side only to see two large brown eyes staring at me. It was Kaley, crouched in the shadows watching me with a haggard, almost hungry look.  She sat still and silent as a grave, hardly drawing a breath. Too scared to speak, I rolled over pretending to sleep as I felt those big brown eyes burn into my back. I’m beginning to worry.

I’m a bit on edge. Many of my human comrades have fallen and I’ve barely enough food left. This morning I heard Kaley muttering under her breath and I discovered . While perusing through our supplies I stumbled upon a slip, red with the color of blood. I could feel my insides recoil in horror as I recognized that last remaining vestige of a human. Several more were littered among Kaley’s belongings. I vomited and began to shake. What had she done? Oh god! What had she done?

She’s after me. I don’t know how much longer I can keep this up. She knows where I am, where I’ll be. She left a message on my door, spelling out her intentions “Zombory u dead.” There’s something dark inside her. I want to help her but I don’t think I can.

The zombies had the last remaining humans surrounded. We were in the car and they pressed on from all sides. I saw Kaley amidst their presence. She stood along the sidelines with her blood shot eyes. There was something to them, something feverish and crazed behind the once innocent dark ovals that made me realize my friend was gone. I stepped out of the car, holding zombies back as much as I could when I looked into her unrelenting stare and froze from an expression too haunting to express. A twisted smile, ill-suited for the sweet girl I used to know spread upon her face. Saliva and blood dripped down the corners of that insane smile and I knew the hunger had taken her over. Humanity had left her completely. But perhaps it was those big brown eyes that made me drop my guns and stop struggling. Looking only at her, I begged the real Kaley to show herself, to just give me one hint, one wink of a smile to show she was still there. I felt without panic, cold dead fingers shoot out from beneath the car and grip my ankle in my moment of stillness. I simply stared as Kaley’s smile deepened and she began to laugh. She laughed hoarsely, never blinking, never breaking the connection, as the zombies closed in. A tear rolled down my cheek as I succumbed to the bodies around me. I will be with you soon, friend. I will be with you soon.