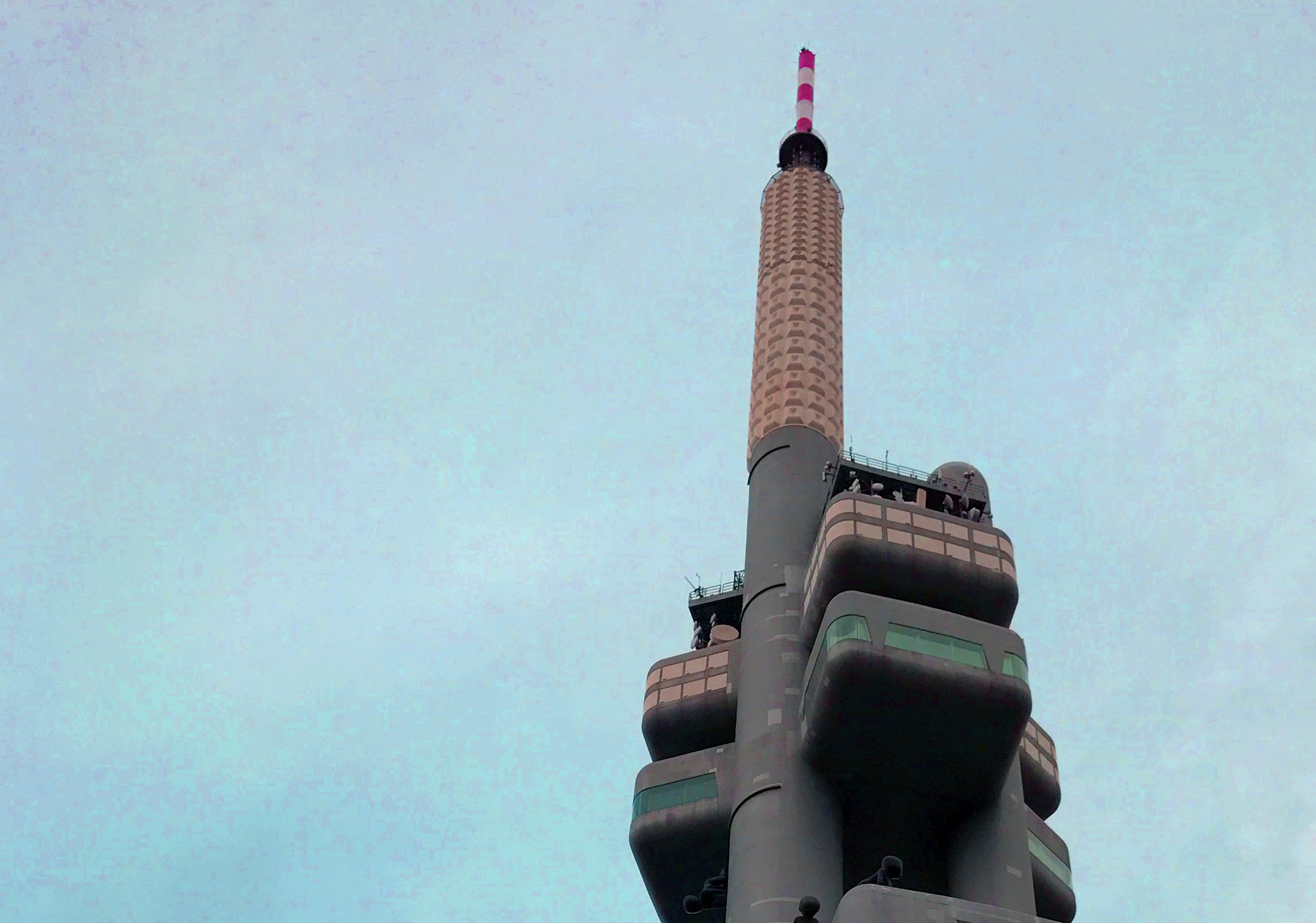 Several blocks from my apartment resides the second ugliest building in the world. Ignorant of this harsh label, the tower stands out from the Prague skyline as a relic of the country’s communist past.

The Žižkov Television Tower, once called “Jakeš [Warning] Finger” by the locals–a reference to the last leader of the communist Czech Republic–stands 700 feet above the small neighborhood surrounding it. It’s the tallest building in the city and offers a panoramic view from the top. It’s overshadowing height is one of the reasons locals despised it from its inception. Nowadays, the tower is most well-known for the ten identical, crawling babies affixed to it.

The babies are not the only interesting thing about the building–it has an intriguing and controversial political past. It was designed by architects Václav Aulický and Jiří Kozák and built between 1985 and 1992, during the decline of the Communist regime in the Czech Republic. The tower functioned as a transmitter for broadcasting but it is rumored that communists built it to interfere with television and radio signals from the West, especially from Radio Free Europe, an organization aiming to deliver uncensored news to a Communist-controlled eastern Europe.

The tower is right next to the remains of an old Jewish cemetery. Although the official line is that the cemetery was moved before the tower was built, many Czechs say, including my professor who took a group of us there, that the communists chose to build the tower on top of the cemetery. To do so, they simply dug up the Jewish graves that were in the way, with no regard for the bones. This deeply upset many residents of Prague and engendered the negative feelings towards the building.

The tower’s website fails to mention anything regarding the destruction of the Jewish cemetery. On the history page, it simply writes, “The remaining preserved part of the cemetery, where you will find tombstones of figures such as Franz Kafka, is now separated by the park walls.”

In 2000, David Černý–a famous and controversial Czech artist–constructed the ten crawling, copper babies and affixed them to the building. After a period of exhibition, they were permanently installed in 2001. According to an article by Radio Praha, public reception to the tower increased positively after the babies arrived. Michal Zelenka, the tower’s administrator, told Radio Praha the babies make the tower seem more human.

Černý gained notoriety after spray painting an old Soviet war tank pink, that had been placed in the center of Prague as a monument, and subsequently being arrested. He is well-known for his sculpture of St. Wenceslas sitting atop a dead horse and a floating purple hand on the Vltava River with an outstretched middle finger pointing to the Prague Castle residence of Czech president Milos Zeman–famously known for his drunken debacle at the ceremonial display of the Czech crown jewels. If you haven’t seen it, Youtube it.

Several days ago, the famous babies were taken down for a renovation. The sculptures stand over six feet tall and weigh 264 pounds. After 17 years exposed to the elements, Černý is anxious to see how the creations have fared. It is expected that the ten identical babies will return to the Žižkov TV Tower next Spring.

Information for this article was gathered from www.radio.cz, www.cbc.ca, towerpark.cz, en.wikiarquitectura.com.