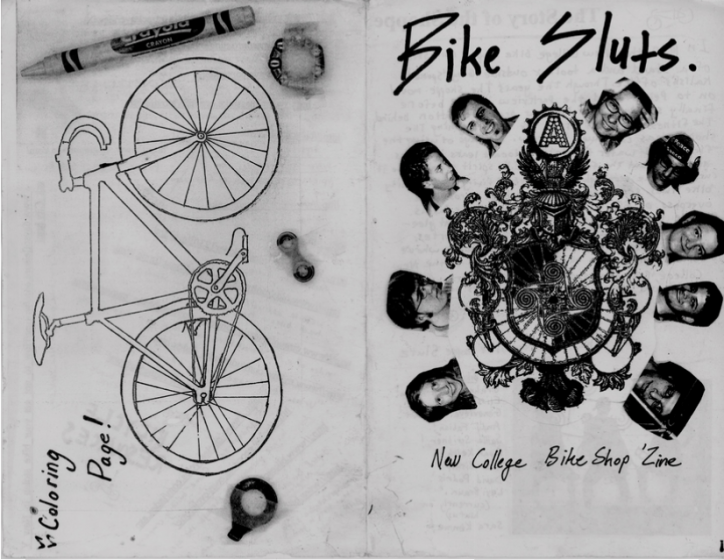 Now in its 26th year in existence, and its 22nd year in its current location behind the Fitness Center, the Bike Shoppe has functioned primarily as a place just to fix up your bike. But as zines from a decade ago, alums, and current students reveal, the place has long been an important social space.

Zines from 2005 and 2006 located in the Bike Shoppe reveal a different environment from the past. The zines, “Bike Sluts” and “Hub Hussies” were made by students who volunteered and worked at the Bike Shoppe.

In addition to providing pseudo-romantic musings on bikes and general advice on repairing, building and riding bikes, the zines also offer stories on the culture of biking at New College.

One story in the zine, titled “The Overpass of Doom” and written by alum Barry Kaminsky (‘05), critiques the size and location of the overpass across US41, while another by alum Elissa Lane describes an instance where the author accidentally crashed into a Physical Plant golf cart and fell into a worker’s lap while turning the corners of the overpass.

From information on properly locking up a bike to the rules of riding a bike with traffic, the zines are just as salient to New College riders today.

Copies of flyers in the zines furthermore reference concerts and other events held in the Bike Shoppe, including a weekend-long festival about biking featuring games, movie screenings, workshops and a cookout.

Though not directly addressed, the zines briefly speak to the perceived exclusivity and intimidating nature of the Bike Shoppe. In “How to Become Bike Shoppe Mekanix” by alums Abigail DeAtley and Jordan Dobson, the first step to become a Bike Shoppe mechanic is listed as follows: “Go. To the Bike Shoppe. Don’t be scared. Of the Bike Shoppe. While they may be speaking bike talk, they also speak English pretty well, so don’t be afraid to approach them and ask about volunteering.”

Thesis student Hedda Cooper describes her early experiences with the Bike Shoppe as a social space. “I wasn’t biking my first year, I just knew people that worked there and would go for shows… there used to be Bike Shoppe shows all the time, like once a month,” she said.

Once she started biking, Cooper would go there more frequently to ask for advice. She cites there being four or five Bike Shoppe TAs and volunteers, all of whom identified as men. “I always felt fine just going there and asking ‘What is this?’ or ‘What am I doing?’ or ‘How can I upgrade my bike?’

First-year Kaithleen Conoepan has similarly used the Bike Shoppe as an introduction to biking. Though she arrived at New College this fall with little prior knowledge about bikes, she has ultimately used her ISP to build a road bike of her own. She was given a TA position this February.

Third-year Francisco Perez likely has more experience with the Bike Shoppe than anyone on campus as Bike Shoppe TA. He’s held the position since the first semester of his second year in fall 2014. Like Cooper, he recalls the Bike Shoppe primarily being run by men. In his memory, there was a woman who was a Bike Shoppe TA around four years ago.

Perez says there has been some criticism of the Bike Shoppe and its perceived level of inclusivity during his time as TA, as well. “I really do try to be as inclusive as I can be,” Perez said. “I could definitely do more if I knew that there were people out there who didn’t feel comfortable coming to the Shoppe… but I just don’t know of any instances. But I hear the word of mouth.”

He recalls a night in which the Shoppe had a “no boys allowed” type of event in which women and nonbinary cyclists were encouraged to spend time there. Perez says that he hopes for more events like this in the future.

“My first year, before I started working there, I was intimidated, too,” Perez said. “It’s a weirdly intimidating environment… I think people go there under the assumption that the people there know more about something than them… but the point of the Bike Shoppe is to teach.”

Perez added that he dedicates much of his time to helping others at the Shoppe and trying to make it an open environment to everyone. “I don’t like the term ‘bike boy’ because it implies a lot of things about my character that might not be true,” he said. Perez is paid for four hours a week for being Bike Shoppe TA.

“It’s true that it’s been a boys club in the past… but now we have Kaithleen working there. I’m trying out a new thing called ‘Late Night Bike Shoppe’ on Friday nights… I kind of want to work on getting people to hang out there again,” he added.

Though the zines would seem to suggest that the Bike Shoppe used to be far more of a social space, Kaminsky said that these changes are normal. “I wouldn’t worry about the Bike Shoppe declining from year to year,” he stated in an interview via Facebook. “At such a small school, there’s only so many people there… It declined after my first year, but after I left a few years later it was basically recreated to suit the needs of the students.”

There are some old traditions the Bike Shoppe hasn’t held on to.

“I think one of my favorite memories was that there was a little fixed gear [bike] – it was made for a 3-4 year old. We would take turns seeing who could ride it the longest.” Kaminsky said.

Cooper also recalls a different tradition — the Huffy toss. “There used to be a huge amount of old bikes everywhere around the Bike Shoppe, and they would take really broken ones and draw a line on the road next to it and then there would be a contest to see who could throw the bike the farthest. That used to happen a lot.”

Alum David Podris (‘03) confirmed the tradition of the Huffy toss in an interview via email: “Huffy throwing was usually part of a general bike weekend that included all sorts of debauchery. I remember standing in line behind a professor at the keg while a mechanic did a keg stand in front of us.”

Podris said that the Shoppe used to organize critical mass rides monthly, taking a lane of 41 and heading downtown in rush hour traffic.

“I learned more in the Bike Shoppe than I ever learned in class,” Podris said. “Sometimes I wonder if I wasted my time at New College. Then I remember the other world at New College. Not the one made by the administration and faculty, but the world made by young people… Let me just say that I still proudly wear my Bike Shoppe crest.”