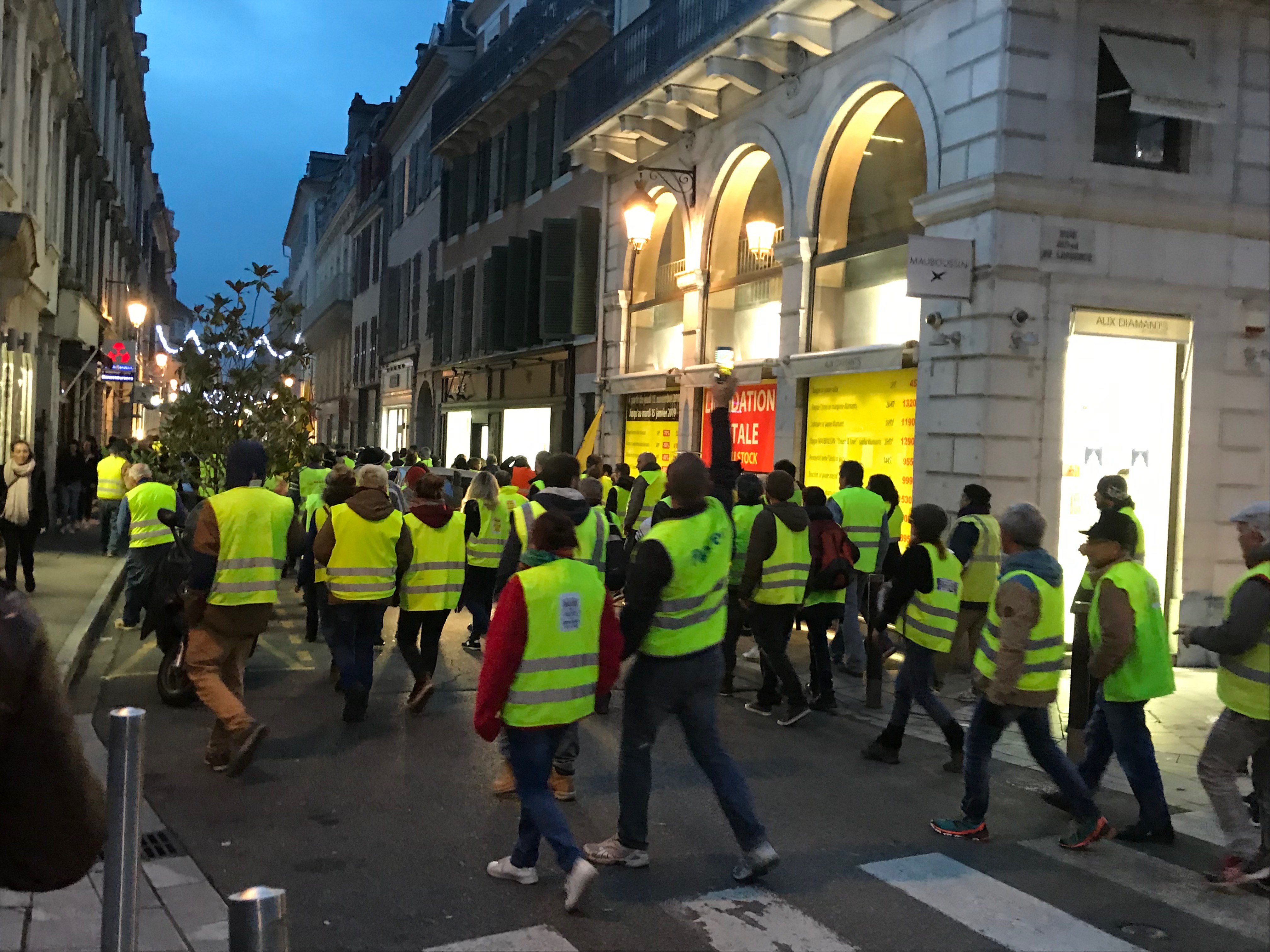 After 12 weekends of protest, the “Gilet Jaune” (Yellow Vest) movement continues to impact France. The protests initially developed in response to President Emmanuel Macron’s plans to raise fuel taxes, but have since evolved into a broader revolt against the government. Over 65,000 demonstrators continue to take to the streets every Saturday.

There is no end in sight

When protests first started in November, over 282,000 demonstrators participated. Though participation has substantially decreased, particularly around the holidays, the movement continues to have a strong presence, both in person and online.

“The amount of protesters decreased over time, which seems logical as anger decreases as well, but there seems to be no change in media coverage or in actual protest’s impact on daily life,” Charley Zaragoza, a multimedia journalism student at Ecole de Journalisme Bordeaux, said in an email interview. “Every Saturday, clashes erupt and city centers are on lockdown. The movement is also very strong online, and some Facebook pages and groups dedicated to the gilet jaune movement have upwards of a million members.”

An Odoxa survey conducted for Le Figaro and Franceinfo in December showed that 77 percent of French people find their demonstrations legitimate.

“It’s hard to tell whether the movement is losing or gaining strength, because there seems to be a silent base of people who don’t necessarily protest, but give strength and hype to those who do,” Zaragoza said.

According to Zaragoza, the French public has become more accustomed to the demonstrations. While the first weekends of protest cleared out towns, shut down stores and blocked streets, the more recent ones have not been as disruptive.

Though the public has adapted, the protests still have a significant impact on French life, especially in larger cities like Paris.

“It’s present in every town in France and the movement has an impact on everyone’s life one way or another,” Julien Bonin, a rope access technician in Paris, said in an email interview. “Everyone is concerned, even if they try to chose not to be. It’s impossible to be living in France right now and not have the movement impact your life.”

On the 12th weekend of protests, participants in Paris carried a large banner showing photographs of people injured in previous clashes with police. Around 1,700 demonstrators and 1,000 police officers have been injured since the protests began.

“I feel like it is the right decision,” Zaragoza said. “I would argue that in any other country, police forces would not have been so lenient with protesters, and the latter should already be satisfied with the fact that protesting is lawful and a right protected by the government. Plus, a power balance between police and protesters has to be established, and these rubber-ball launchers are the safest way to do so in my opinion.”

The court decision, however, has caused more controversy and division within the country.

“The most serious part is that the police aim at the head, which is forbidden,” Nicolas Sigé, environmental expert for Total S.A. in Pau, said.

A press statement by the court said that the judge found that “many of the protests since November were frequently the occasion for acts of violence and destruction.”

“The impossibility of excluding the reproduction of such incidents during future demonstrations makes it necessary to allow the police to use these weapons, which remain particularly appropriate for dealing with this type of situation, subject to strict compliance with the conditions of use,” the statement continued.

The government announced that every police officer equipped with an LBD would be required to carry a bodycam.

“Getting pepper sprayed by the police is a common occurrence during these protests, too, especially if you’re around people throwing bombs,” Bonin said.

One of the reasons the movement has gained so much support is because it is not tied to any specific political outlook. It grew to a general disapproval of Macron—an anti-establishment movement. This general outlook attracted demonstrators of different political affiliation, social class and profession. Recently, however, the lack of defined interests has led to fractures within the movement.

“It did start with the tax problem, but it has grown into a movement that is extremely fractured and held together only by their discontent with the state and the president,” Bonin said.

A new “red scarf” protest of about 10,000 supporters marched through Paris to protest the acts of violence and vandalism by the Yellow Vests. Like the Yellow Vests, the red scarves have a strong online presence.

In an interview with regional newspaper Le Dauphiné Libéré, John Christophe Werner said he had created the red scarf Facebook group because French “citizens are being penalised every day by the Yellow Vests’ methods.”

“I think the red scarves were just a one-time thing, just a way to represent the people who speak up against the Yellow Vests,” Zaragoza said. “I think it’s as unproductive and even more divisive to add another group of protesters.”

The movement could result in strong political disruption

With European parliamentary elections taking place in May, the movement has started to take different positions on electoral involvement.

Already, five separate groups have emerged with plans to oppose upcoming elections. One recent poll suggests that a single group could cause a disruption of up to 13 percent of French votes for the European elections. These votes would mainly draw support away from the far-right and far-left parties of Marine Le Pen and Jean-Luc Mélenchon.

“We know we can’t stay on the roundabouts forever,” Come Dunis, a candidate with a newly formed party, the Citizens Initiative Rally, told the BBC. “We’ll show that unemployed people and forklift truck operators can sit alongside technocrats and bureaucrats in Brussels.”

In addition, Macron is reportedly considering to hold France’s first referendum in 14 years in an effort to quell the protests. Yellow Vest demonstrators argue that referendums held on major policy decisions would introduce a new, broader-based form of democracy.

“A referendum is an essential part of democracy,” Zaragoza said. “However, I feel like a referendum needs to have the majority of the population advocating for it. It [is] a very serious procedure, not to be taken lightly.”

The referendum would be held on the same day as the European Parliament elections and would ask voters if they want to reduce the number of Members of Parliament (MPs), as well as limit the number of terms that they can serve.

“A referendum would maybe depict a good picture of what French citizens really want in terms of policies from the government, but I can already say that not enough people are concerned with the Yellow Vest movement,” Zaragoza said. “It’s a minority, just so vocal that it sounds like a majority.”

In an effort to appease protesters, Macron has launched a grand débat national. This communication initiative is planned to last two months and help alleviate the anger that led to the protests.

Macron is heavily criticized for his tax cuts on the rich, while the middle and lower classes’ taxes have continued to rise. As a result of the pressure of the Yellow Vest movement, he has backtracked on the controversial carbon tax that initially sparked the protests, raised the minimum wage by 100 euros a month and proposed new tax rates.

“The people had what they want with the protests, but are still on the street asking for the impossible: Macron’s resignation,” Zaragoza said.

Information for this article was gathered from lemonde.fr, liberation.fr, bbc.com, nbcnews.com, nytimes.com, independent.co.uk and theguardian.com.