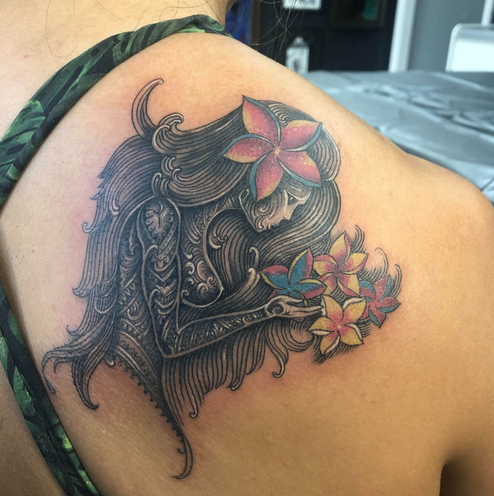 A tattoo depicting a Pacific Island girl. She also has tattoos, and she is holding four plumerias. Photo courtesy of Aimee Mendoza.

The history of tattoos is estimated to date back to 5,000 BCE. Humans have always been fascinated with body art—especially when said art has the potential to become a permanent part of them. What could be a better way to honor something special to you than placing a unique set of shapes and colors on your skin? Several New College students have shared their tattoos with the Catalyst, why they chose them and what meanings they hold.

In Oct. 2020, thesis student Moriah Olsen went to get this elegant tattoo by their sister’s friend—who so happened to be a tattoo artist. They associate no personal meaning with the artwork they chose a couple months prior to their appointment; they just think snakes look really cool!

“What I love about this tattoo is that I’ll always have a friend right by my side, and I think that is important,” they explained. “I also enjoy getting compliments that come with a giant snake on your arm.”

Olsen is planning to get more tattoos which will surround their current one.

First-year Kira Smith got their first tattoo in Feb. 2022 of a hawk moth. It is definitely their favorite out of the four they have, and the idea spurred from their love for moths as a whole.

On Jun. 12, 2019, third-year transfer student Aimee Mendoza received this tattoo to celebrate a significant time in her life. It is common for many indigenous tribes to use tattoos as a rite of passage into adulthood, and this beautiful tattoo of a Pacific Island girl holding four plumerias was Mendoza’s symbol of a new beginning.

“This was a way to honor my roots and myself, celebrate the independent, empowered woman that I have become and to recognize my femininity,” she recalled, “It is a symbolic reminder to not look back and to always keep going. I had definitely earned my rite of passage.”

Third-year Nayelis Cardenas got their tattoo of the Greek Fate’s hands holding a tangled set of strings in Nov. 2021. As a “Greek mythos nerd,” Cardenas holds the importance of the fates highly to how they see the intertwinings of the past and the future.

“It’s important because I’ve always thought of having the idea of being fated to be a certain way, but I learned that I can make my own strings and see my own path, like a fate,” they stated.

As a service dog owner, first-year Kamren Start wanted to express their gratitude towards their first service dog-in-training: Lucky. They got Lucky’s nose-print and brought it to a tattoo artist who permanently placed the dog’s sweet little nose on Kamren’s arm.

“Not only is Lucky my prospective service dog, but he is also my family, best friend and the light of my life,” Start said. “I always said that the first tattoo that I ever got was going to be in honor of him. I wanted to get something that had a meaning behind it—other than it being for Lucky—so I chose his nose print, because as an alert he will boop me with his nose.”