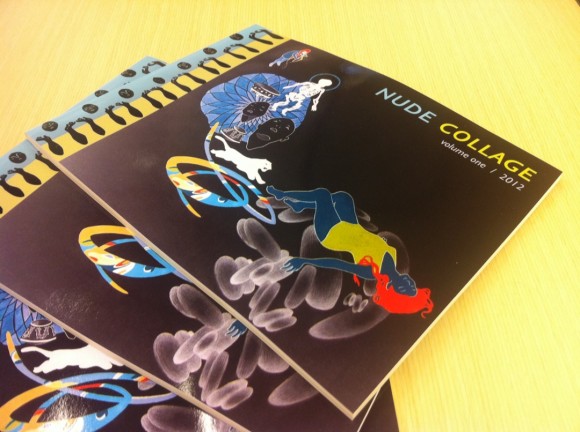 The cover of the first Nude Collage journal was designed by artists Foxanne Mesmer.

In the back right corner of the Jane Bancroft Cook Library, behind the DVDs and the public computers, between the offices of the research librarians and the bathrooms, exists a special room specifically created to assist all of the academic needs of the New College students, aptly named the Academic Resource Center. And in this mysterious ARC exists a special group of people who work in the allocated area of the Writing Resource Center (WRC) to assist in the writing needs of those on campus. These students, the Student Writing Assistants (SWAs), act as peer editors and if someone needs an article, essay, research paper, short story or even a poem read through or edited, the SWAs are the people to talk to.

In the past, the SWAs, along with the WRC Assistant Director, usually create and print one academic journal and one literary magazine a year containing the work of Novocollegians. This year, however, the SWAs and WRC Assistant Director Natalie Catasús decided instead to print one journal that features both the academic and creative minds of New College. Thus Nude Collage was born.

“The staff (of the WRC) decided to combine the two publications because they had an interest in moving away from the genre distinctions,” Catasús explained. “They were just looking at writing [from] New College [students] more holistically. So they wanted to put academic work next to creative work and start a dialogue going.”

The first ever issue of Nude Collage, which will be available starting May 4, contains artwork, academic essays, poems, short fiction as well as a few other pieces of non-traditional literary format. Back in October, the SWAs announced that they would be accepting student submissions for the hybrid journal, which would be read by all of the SWAs and then be chosen by popular vote.

After the chosen pieces were decided upon, Catasús and the WRC’s Director Jan Wheeler met with the submitters to ask for permission to print and go over basic editorial fixes and to request small biographies from them. The different works were chosen from a group of over 75 submissions.

According to Gregg, the WRC staff spent a lot of time painstakingly working on the layout of the journal. They occasionally contacted contributors when the specific layout of one of the submissions was important, especially with the poems.

“We took the initiative to figure out what the layout should be,” Gregg added. “We wanted it to be in landscape [design] because all of the other [journals] have been in portrait [design]. It looks really nice, and there’s so much more of a landscape to look at.”

The general consensus of the WRC staff members is a great deal of pride in their creation. The journal took the better part of five months. The WRC staff each proofread the submissions multiple times and spent countless hours formatting it in Adobe InDesign. The cost of printing the 200 copies of the journal was covered by the WRC budget.

Nude Collage will be distributed at a release party that is happening at the Four Winds on May 4 at 6:00 p.m., which will also coincide with an open mic event. Students are highly encouraged to participate and come get a free copy of New College’s first ever hybrid journal.

“Everything about the WRC is all about collaboration, and I think this journal really reflects that,” Gregg concluded.