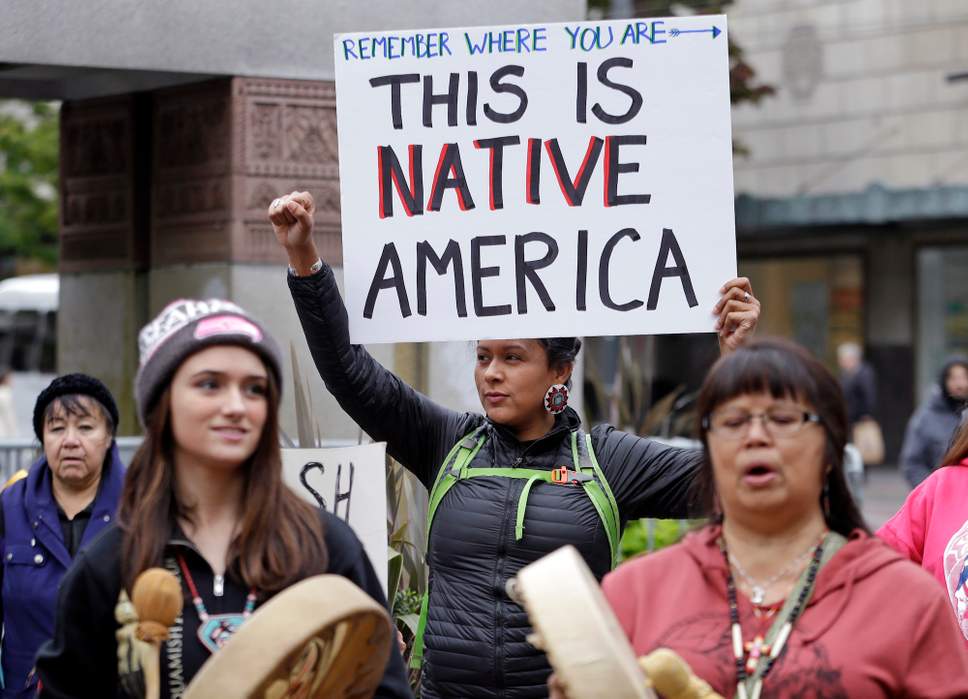 Photo courtesy of Elaine Thompson Ruth Sims, a Navajo/Oglala Sioux, holds a sign during a demonstration for Indigenous Peoples Day in Seattle.

So goes the popular tale of Thanksgiving: the Pilgrims and the Native Americans came together for a “peaceful meal” to give thanks for their bountiful harvest, friendship and survival. Recognition of the indigenous struggle is a step toward understanding the complexities of history beyond this polished narrative.

The histories of indigenous Native American peoples have been largely erased from what is “American,” owing to European colonists who came and stole their land and tampered with their existence. This history, as well as the narrative of Thanksgiving, becomes skewed through the way it is approached and whitewashed in systems of education and the popular media.

“It took me many years to realize that a key part of my job description as someone who teaches U.S. history is the unteaching of U.S. history,” Professor of History Brendan Goff shared. “The mythology that’s all wrapped around Thanksgiving is a really good example of that.”

Goff spoke about the book Playing Indian by Philip J. Deloria, which was published in 1998. In the book, Deloria references the “Indianness” of a popularized American history, in which it is constantly trying to draw upon stories such as those of Squanto and the Patuxet Tribe, and co-opt them in simplified narratives that diminish the Native American experience. This is done by selectively incorporating from that experience what would help the British colonists flaunt themselves as unique to both Europeans and Native Americans as the “new Americans” of a new and independent nation.

“So there’s this “Indianness” in the process of the European “becoming American,” but at the very same time this way of approaching things marginalizes and trivializes the Native American experience, existence and contributions, which Deloria touches on,” Goff stated. “In regards to the common story, Squanto was a formerly enslaved person in the Atlantic slave trade who was then brought back to North America, and that’s the only reason why he was even able to serve as a communicator and mediator between the colonists and the Native Americans. He becomes largely a footnote to the story.”

Professor of Anthropology and Heritage Studies Uzi Baram wrote on his experience of Thanksgiving this year, which involved spending time with his children, parents and friends, and enjoying the break from work as a collective opportunity to express gratitude. He promotes the importance of the awareness of Native American culture when celebrating a holiday with a history that thoroughly demonizes it.

“I recognize we are on the lands of the Seminole and Miccosukee peoples; we are uninvited guests here,” Professor Baram shared in an email interview. “Learning their history and some Seminole Creek language (for example, the greeting Istonko, pronounced “iss-tone-koh”) is a start. The Pilgrim story for Thanksgiving is a fairly recent invention of tradition but as Sean Sherman (of the Oglala Lakota Tribe), who calls himself the Sioux Chef, writes: we can focus this harvest festival on the foods of indigenous North America and learn from and appreciate them.”

Sherman Alexie, a Spokane Coeur d’Alene Native American, was asked if they feel they’ve been able to make Thanksgiving their own in an interview with Bitch Media.

“You take the holiday and make it yours,” Alexie said. “That doesn’t strip it of its original meaning or its context. It is a holiday that commemorates the beginning of the end for us, the death of a culture. I guess you could say Thanksgiving is also about survival: look how strong we are.”

As shown through Alexie’s approach to the holiday, an option that some people choose is to try and personally reframe it, while still fully remembering and understanding its roots.

“I guess it’s trash talking,” Alexie stated. “Look, you tried to kill us all, and you couldn’t. We’re still here, waving the turkey leg in the face of evil.”

Goff mentioned a paraphrased quote from the late 19th-century French historian Renan: “A nation cannot exist without getting its story wrong.” Thanksgiving, and the whitewashed narrative that surrounds it, is a classic example of this. As Renan believed, nationalisms are intertwined with various forms of collective amnesia to maintain the “usable pasts” that feed into national mythologies.

“Especially with national holidays, they’re almost always driven by a certain agenda that serves the interest of the state and its preferred narratives,” Goff stated. “In doing that, it’s by definition that you have erasures involved. Nowadays it has become all about turkey, Macy’s Day Parade, football games and arguing with your family members about politics.”

Instead, Goff thinks we could have a sense of a return to appreciation and acknowledgment of the positive human connections, backgrounds and roots that we have, while still keeping in mind all of the differences and sources of polarization.

“People make their own history though not under conditions of their own choosing; many are choosing to focus on Thanksgiving as the start of a holiday consumerism spectacle (and Thanksgiving was set on this fourth Thursday to encourage shopping for Christmas) but others use the holiday to expose myth-making and find other meanings for this holiday,” Baram wrote. “It’s up to us; the holiday has changed meanings over the centuries and can continue to change, if we wish.”

Information for this article was gathered from nytimes.com and bitchmedia.org.