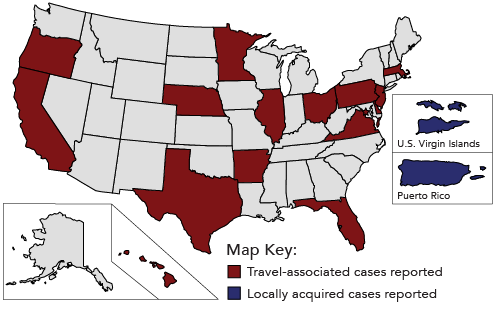 Outbreaks of the mosquito-borne Zika virus remained under control until its rapid expansion in 2015, which appears to be continuing into 2016. The World Health Organization (WHO) declared the Zika virus a Public Health Emergency of International Concern (PHEIC) earlier this month due to its connection to cases of microcephaly, a congenital condition, and other neurological disorders.

Originally discovered in a rhesus macaque monkey in Uganda’s Zika Forest in 1947, the virus was able to maintain a low profile for 68 years. Only recently has it become recognized due to an uncontrollable outbreak in Brazil. A lack of data has left the exact number of infections in Brazil largely unknown.

Brazil’s Health Ministry suspects, however, that upwards of 500,000 to 1.5 million people have been infected. For this reason, the Zika virus’ swift proliferation across the Americas is troubling. Especially so now that it has been detected in several U.S. states, including Florida.

This presence has compelled Florida Governor Rick Scott to declare a state emergency in the counties where Zika has been diagnosed. Up to now this list of counties includes, but is not limited to, Broward, Hillsborough, Lee, Miami-Dade and Santa Rosa.

“The level of concern is high, as is the level of uncertainty, ” Director-General of the WHO, Doctor Margaret Chan said in a press release. This unease is mainly due to the unpredictable growth of Zika, which is thought to spread in one of two ways: through sexual contact or, more commonly, through mosquitoes.

Only recently has the Centers for Disease Control and Prevention (CDC) confirmed the suspicion that sexual contact is a method of transmission for the Zika virus. In order to prevent and control the rate of sexual transmission, the CDC has issued interim guidelines for expecting families, non-expecting sexually active partners and all healthcare providers.

One of their suggestions is to employ contraceptive measures, such as condoms, that are known to help prevent the contraction of sexually transmitted diseases (STDs). For NCF students, this form of protection is readily available. On campus, contraception is provided by both the Counseling and Wellness Center (CWC) and the Sexual Health and Relationship Education Resource Center (SHARE) located in Hamilton “Ham” Center. The CDC has stressed, however, that the primary method of Zika transmission is through mosquitoes, rather than sexual contact.

Zika is carried through the Aedes mosquitoes, one of the largest mosquito genuses, that are familiar to both tropical and subtropical regions of the world. “Within the genus Aedes there are two of primary concern for being able to transmit the Zika virus,” University of Florida Professor Roxanne Connelly said. “Those are the Aedes aegypti, commonly known as the yellow fever mosquito and the other is the Aedes albopictus, commonly known as the Asian tiger mosquito.”

In reference to these mosquitoes, “we know that they are able to occur throughout the state [of Florida] and probably one or the other is in everyone’s backyard,” Connelly said. The CDC has recommended that people staying in mosquito-inhabited locations take precautionary measures by covering their bodies with clothing, by eliminating areas that are ideal for mosquito breeding and by employing mosquito repellent and nets.

“The primary thing that people can do is really focus on where these [mosquito] habitats may be— not only in your own backyard, but in your community,” Connelly added. “It’s going to take a community effort to really reduce these mosquitoes because the number of the potential places where mosquitoes can lay their eggs in any given backyard is limitless.”

NCF Physical Plant applies several safeguards to prevent mosquito reproduction. One of these procedures is to drain standing water. “There have been spots on campus where we have had standing water for extended periods of time, one was between Sudakoff and Z Dorm, and so we put another storm intake there,” Director of Physical Plant Alan Burr said. In addition, Physical Plant works to ensure that outtakes in detention ponds, such as the one by the Dortstein and Goldstein Residence Halls, are kept free of debris so that they drain properly.

Physical Plant’s job is not made any easier by the students, as “there have been a lot of screens on buildings and they get removed,” Burr said. When found, these screens are stored to be reapplied the following semester. For students that want screens to be returned sooner, this request can be processed through filing a normal work order request online. “If the windows weren’t set up to have them [the screens], then we can’t put them on,” Burr cautioned.

It is important to note that although the Aedes mosquitoes are classified as floodwater mosquitoes, they have a very specific habitat. “These two particular mosquitoes [the Aedes aegypti and Aedes albopictus] are also classified as container mosquitoes. This means they lay their eggs just above the water line where it’s still a little bit moist, then the eggs will dry out and when water in those containers rises – from rainfall or irrigation – then those eggs hatch and you will have mosquitoes in the container,” Connelly said. “When I say container, I’m talking about anything that can hold water for a few weeks at a time. Some examples would be vases, cans, pet dishes, bird baths, wheelbarrows and one of the most common areas to find them are in used tires.”

After contracting Zika, one can only receive a diagnosis after undergoing laboratory testing to analyze blood or other bodily fluids for the presence of the virus. Several factors make this process challenging though, one of which is that the signs of Zika are largely inconspicuous and appear to be similar to other mosquito-borne illnesses, for instance, the Dengue fever.

Another element that complicates the diagnosis process is that Zika symptoms are usually mild, lasting for only 2-7 days. Recorded symptoms consist of fever, rashes, conjunctivitis, headache and bodily fatigue, all of which may appear similar to signs of a common cold. The significance of these complications is that many people remain undiagnosed and could conceivably transmit the virus further, whether it be to other people or to mosquitoes.

“It’s a cycle that goes back and forth between mosquitoes and humans. So, if we start with a human who has been infected with the virus and they’re circulating the virus in their blood and they go outside where mosquitoes feed on them, there is a window there. I don’t know what it is—several days I’m sure, however long the virus is in their blood—and if the mosquito feeds on them then they would be able to pick up the virus,” Connelly said.

Once the mosquito catches the virus it will then spread through its body, including to the salivary glands. When a female mosquito feeds on a human she is inserting her mouth into the skin. This means “she’s releasing some saliva into the bloodstream as she’s taking the blood out. So, if she has the virus in her salivary glands then, when she releases her saliva, the virus goes out with it and that’s how she infects a new host,” Connelly explained.

Guillain-Barré syndrome (GBS) is a “rare condition” characterized by muscle weakness and tingling, occurring as a result of the body’s immune system attacking part of the peripheral nervous system. The onset of GBS is most often elicited by infections or viruses and is diagnosed based on the symptoms. Treatment consists of supportive care and supervision, from which most patients recover fully.

On the other hand, microcephaly is another rare, but more serious condition, by which a baby is either born with an abnormally small head or with a head that stops growing after birth. Most of the causes of this condition remain unknown, although the WHO believe that infections or viruses, exposure to toxins, genetic anomalies, or malnutrition may be potential causes. Unfortunately, there is currently no treatment for this condition and those born with it are at risk of dying shortly after birth or can develop developmental difficulties and learning disabilities.

For this reason, the CDC recommends that pregnant women or women planning on becoming pregnant do not travel to areas experiencing Zika. In order to aid this effort and to delay any increase in transmission of the virus, many major airlines are offering to relax their change policies. Airlines such as American, Delta, JetBlue, SouthWest and more have implemented travel alerts that may allow for pregnant women to either refund, reschedule or relocate their prearranged flights to infected locations.

According to a White House press release, the administration is asking Congress for more than $1.8 billion in emergency funding to help combat Zika both domestically and internationally. This money is intended to be distributed between the Department of Health and Human Services, the U.S. Agency for International Development and the U.S. Department of State. These departments’ goals include the support of Zika readiness and response capacities, the enhancement of mosquito control programs, the development of diagnostic tests and vaccines, and increased research into the virus’ connection to neurological disorders.

Information for this article was taken from www.cdc.gov, www.who.int, www.flgov.com, www.pri.org, www.cnbc.com and whitehouse.gov.